Skip to content
Meet the Trail Community: Meteorologist Though it's summer, there's still snow high up. NWAC meteorologist Dennis D'Amico knows what the weather's doing, and his forecasts help you (and him) make good decisions about where to go hiking. https://www.wta.org/news/signpost/meet-the-trail-community-meteorologist https://www.wta.org/news/signpost/meet-the-trail-community-meteorologist/@@download/image/Daniel_Silverberg_2016-05-26_WTA_Dennis_D'Amico_Portrait_0248-Edit-crop.jpg

Though it's summer, there's still snow high up. NWAC meteorologist Dennis D'Amico knows what the weather's doing, and his forecasts help you (and him) make good decisions about where to go hiking.

When the temperatures rise in town and you’re planning your early summer backpacking adventures, it may seem unusual to check the forecast for snow. But June in the mountains is anything but dry -– snow can stick around on many popular trails until well in to July, and at lower elevations than you may realize. Luckily, Dennis D’Amico and a team of meteorologists and forecasters at the Northwest Avalanche Center (NWAC) help hikers, backcountry skiers, and backpackers get out safely through winter and well into spring.

Dennis has long had an interest in weather and snow, particularly where it’s going to be.

“You really get into this job because you want to know where the weather is going to be the best, no matter the season.”

He says it as a joke -- the other guys in the office laugh and nod along -- but there’s some truth to it. He grew up on the East coast, and began backcountry skiing in the winter of 2002/2003, so finding the best snow was an important pursuit. 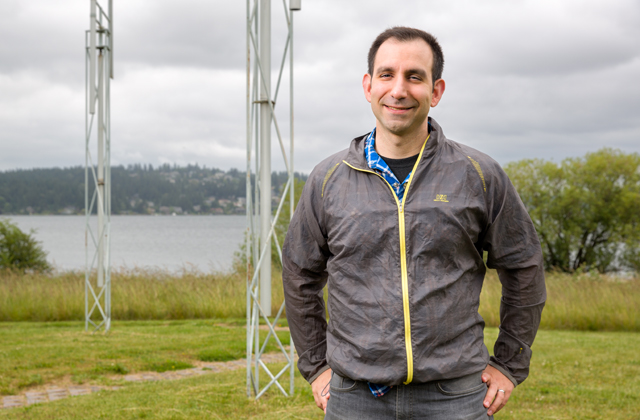 Dennis D’Amico outside his office on Lake Washington. Photo by Daniel Silverberg

It wasn't until a college internship on Mount Washington, the East Coast peak notorious for extreme weather, that he discovered the joy of hiking on his off days.

“It was great to experience the freedom of packing up and just walking off for the weekend. Hiking all summer was awesome.”

Eventually, Dennis’s career brought him to Washington, where his first hike was on the Pratt Lake trail.

“I just loved that you could get into wilderness so close to home. It’s within an hour of Seattle.”

Since then, he’s explored all over Washington, for fun and for work. The day I visited the office, two other forecasters were in the field, working from the summit of Crystal Mountain on a repair job.

“Spring is slower for us, so we use the week to go out and repair any damaged equipment.”

Dennis heads out into the field for equipment repairs, but sometimes, the equipment comes to him, He shows me an ultrasonic sensor, which measures snow depth at established weather stations.

“We brought this one in to fix -– it got pretty wet last season up at Baker and stopped working.” 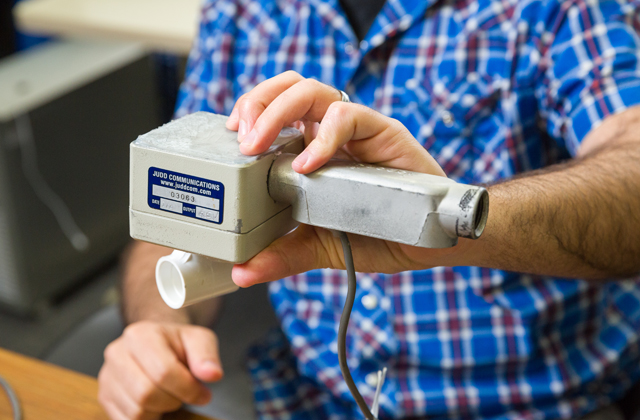 Luckily, if equipment is damaged, computer models can also help him predict storm cycles, which is important well into spring.

“We go from issuing daily snow reports to a weekly outlook for those who are still trying to find snow, and for anyone who might think they’ll run into it. People started asking for these forecasts for their weekend activities further into spring, so we wanted to help provide them. One evening this May one of our forecasters was running a little behind on publishing Spring Weekend Outlook and a member of the public emailed him directly asking where it was. People are looking for this information, and we’re trying our best to give them what they're looking for.”

NWAC is also trying to help their forecasts support education about snow.

“We’re trying to embed more public-friendly information into the forecasts, so people who are just getting into this know what to look for and how better to interpret the data.”

Day to day, Dennis is in contact with avalanche professionals at ski resorts from the Canadian border to Mount Hood, the Department of Transportation and NWAC’s professional observer network and avalanche techs, all of whom are helping give NWAC forecasters the most up-to-date on the ground information possible. NWAC’s professional observer program network is a paid group of observers who help NWAC offer higher quality and more timely observations. They also help forecasters understand what the snow is doing in a particular area.

“In winter and early spring especially, it’s important to have professionals reporting to us in real time, because they might see something that the computer models don’t or can’t know about.”

He also works closely with meteorologists from the National Weather Service-NOAA, who use their technological stronghold (one of 122 offices nationwide) out at Magnuson Park to predict weather for Western Washington. 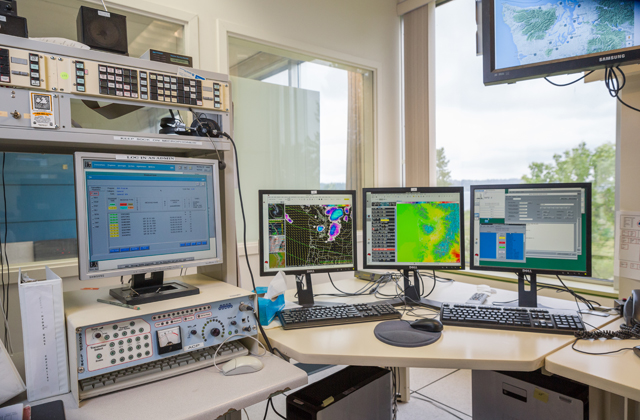 The desk of a Washington meteorologist. Photo by Daniel Silverberg

Dennis is so connected on a daily basis that when he hits the trail, he’s usually heading out as a way to escape the pace of life in town.

“I often prefer to do an overnight or get somewhere where there’s no cell service. You can turn all that off when you’re hiking. Ideally, you’re just focused on putting one foot in front of the other, which puts you in a frame of mind you can’t get anywhere else.”

When he’s not out repairing equipment, Dennis is now sharing the trail with his wife, Ashley, and new little boy Sam. It’s a change from the rugged hiking and backcountry exploring he’s used to.

“Having to slow down has been awesome. I visited Spencer Spit recently and it was a totally different way to experience the outdoors. Having them with me has given me a new perspective to think about hiking.” 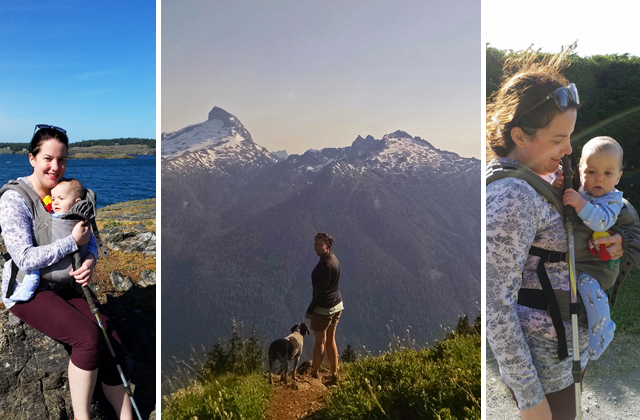 Dennis and his family are learning to enjoy trails in a new way with new baby Sam. Photos by Dennis D'Amico.

And what does Dennis see for the future of trails that Sam will inherit? With so many people hitting the trail now, the unplugged experience he loves can be hard to achieve, particularly on the very trail Dennis fell in love with when he first moved here.

“More and more people are competing for the same assets, so getting out, even snagging a camping spot, takes more planning than it used to. I hope we can maintain the access we enjoy now and consider a redistribution of funding to keep expanding wild areas. Nonprofits like Washington Trails Association are more and more important as budgets are cut.”

Equally important are government/nonprofit partnerships like NWAC, so you can stay safe on the trails you love all year round.