Thunderstorms with intense rains caused wash-outs of two very popular roads this past weekend in North Cascades National Park. Highway 20, the major east-west route through the park, is closed for further notice due to a series of at least eight mudslides between mileposts 150 and 155. Heavy rains also caused the Cascade River Road to wash out at milepost 18, affecting the popular Cascade Pass trailhead.

Highway 20, the major east-west route through the park, is closed for further notice due to a series of at least eight mudslides between mileposts 150 and 155. The road is closed from the winter gate east of Diablo at milepost 147 to milepost 157 east of Rainy Pass. As of Sunday, the largest of the slides is estimated to be a quarter-mile long and 25 feet deep. WSDOT reports that Rainy Pass is accessible from the east.

Before the highway can reopen, the hillsides will need to be analyzed and stabilized by experts, but it is expected that the Washington Department of Transportation will make the repairs as soon as it can. This could take days or even more than a week, however. You can view photos of the slides and follow developments on WSDOT's excellent Flickr page. 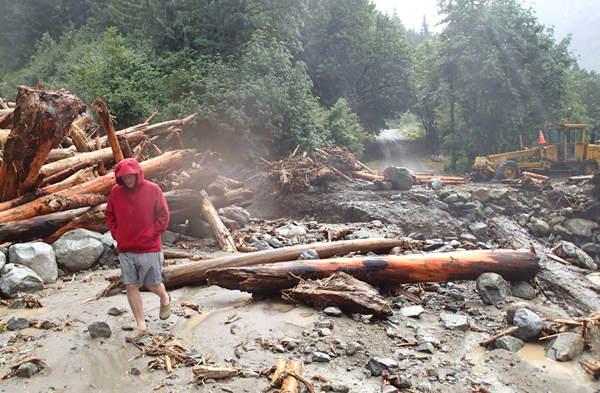 The Cascade River Road is closed short of the Cascade Pass trailhead indefinitely due to a washout across the road. Photo courtesy of National Park Service.

Heavy rains also caused the Cascade River Road to wash out at milepost 18, which stranded approximately 30 vehicles parked at the Cascade Pass trailhead about 1.5 miles above the washout. Sixty-five stranded people spent an uncomfortable night in their vehicles, while National Park Service employees helped them get word to friends and family at home that they were safe. (Read a first-hand account of the experience from our news partner, The Seattle Times.)

The wash-out on the Cascade River Road is estimated to be approximately 15 feet deep and 40-60 feet wide. Plans have been developed to build a temporary one-lane road to allow stranded vehicles to leave the area as soon as possible, possibly by the end of the day on Monday.

While it is likely that the wash-out on Highway 20 will be cleared by WSDOT in the near future, the timeline for repairs on the Cascade River Road is less clear. In the past it has taken months or even seasons to repair. The trail to Cascade Pass and the Sahale Arm is one of the most popular (for a reason) hikes in North Cascades National Park and a fine place to for late summer and fall hiking.

>> Check the road status before you head out hiking in the area.

Update on 8/13/2013 from North Cascades National Park on Twitter:

The road is closed to vehicles at milepost 20, the Eldorado Creek parking area, 3 miles before the road's end. The Cascade Pass Trailhead and Boston Basin access point are not accessible by vehicle. Foot traffic is allowed past the closure point.

My friend's brother in law was camping near Found Lake and was scheduled to return on Saturday. As of today, 8/12/13, he has not been accounted for. Search and Rescue is in the area, but has not located him. If anyone else can help search, the family would be eternally grateful. If you have any info, please contact Rietta Costa of Marysville. Thank you

Is Rainy Pass/Maple Pass Trailhead accessible from the east?

Rainy Pass accessible from the east.

I see on rereading your article that you do say that WSDOT reports that Rainy Pass is accessible from the east. Thank you.

The article is correct, Rainy Pass is accessible from the east. There were some barriers saying "Road Closed" and a small slide near Washington Pass on Sunday afternoon, but you could reach Rainy Pass.