Skip to content
Nature on Trail: Western Tanager, Mule Deer, Western Hemlock Northwest forests are teeming with life -- much of which may go overlooked or unseen. On your next hike, look out for the western tanager songbird, the big ears of the mule deer and Washington's official tree, the western hemlock. https://www.wta.org/news/signpost/nature-on-trail-western-tanager-mule-deer-western-hemlock https://www.wta.org/news/signpost/nature-on-trail-western-tanager-mule-deer-western-hemlock/@@download/image/western-tanager-by-tami-asars.jpg

Northwest forests are teeming with life -- much of which may go overlooked or unseen. On your next hike, look out for the western tanager songbird, the big ears of the mule deer and Washington's official tree, the western hemlock.

Even though this medium-sized songbird is so brightly colored, he is remarkably inconspicuous and somewhat challenging to locate. When you do, it’s a treasure!

This small, finchlike songbird is mostly yellow with dark wings, tail and back. Its range extends across the entire western U.S., from Mexico to southern Alaska, often choosing to nest in Douglas-fir trees.

In the Northwest, look for them in the spring and early summer months in open coniferous and mixed deciduous forests, especially just east of the Cascade crest on trails near Ellensburg, Selah and Yakima. 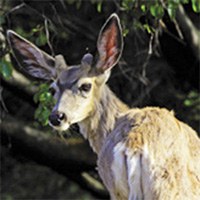 Look to their large ears to identify a mule deer. Photo by Tami Asars.

You’ll know a mule deer when you see one because of their giant ears, which allow them to hear well over long distances.

When browsing for food, they eat a wide variety of woody plants such as serviceberry, sagebrush, deer brush, and rabbit brush. Fawns are usually born in the spring and almost immediately walk on spindly legs, then begin to nurse.

To see them, keep your eyes open especially at dawn and dusk when they are most active. In the Northwest, mule deer tend to stick to the warmer, drier parts of the state and are found in abundance in areas such as Moses Lakes and Spokane. Look for good habitat such as meadows and fields and stay downwind and quiet, as they are extremely sensitive to scent and noise. 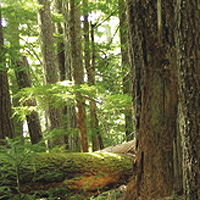 Perhaps you knew that the western hemlock was Washington’s official tree, but did you know that it’s also the largest species of hemlock at 165 to 230 feet in height, with trunk diameters up to 9 feet?

Western hemlocks live long lives, thriving in temperate rainforests where wildfires are less frequent. Some trees are known to be as old as 1,200 years.

To identify them, look for lacy foliage that droops at the branches’ ends and tree’s top, and bark that is brown, furrowed and flattened. The tops of the branches are often darker than the undersides.

To find them, just throw on your pack and visit almost any trail on the western side of the Cascade crest!

This article originally appeared in the Mar+Apr 2014 issue of Washington Trails magazine. Join WTA to get your one-year subscription.