Skip to content
New Trail Links Recreation Areas near Anacortes The nearly-complete John Tursi Trail is a vision decades in the making. WTA volunteers have helped make this connector between Deception Pass and Anacortes a reality, and a ribbon cutting is scheduled for June 4. https://www.wta.org/news/signpost/new-trail-connects https://www.wta.org/news/signpost/new-trail-connects/@@download/image/DSC_0173.JPG

The nearly-complete John Tursi Trail is a vision decades in the making. WTA volunteers have helped make this connector between Deception Pass and Anacortes a reality, and a ribbon cutting is scheduled for June 4.

Trails that link existing recreation areas are of great value, as they act to multiply the accessibility of hiking opportunities and benefit the communities that encompass them. WTA volunteers have worked hard to make one such project a reality—the John Tursi Trail.

John Tursi was hugely influential to the community in Northwest Washington. Not only did he help build the infrastructure at Deception Pass State Park, but years later he and Doris donated a conservation easement on Fidalgo Bay to Skagit Land Trust. In addition, John was the largest donor in the campaign to forever protect the Anacortes Community Forest Lands.

Community was a very important part of John and Doris’ lives and they made generous contributions to help the people, animals and nature of Fidalgo Island. Over the years, John ensured that the places he fell in love with would be here for future generations.

The new route meanders through one of the most picturesque valleys on Fidalgo Island and connects Deception Pass State Park to the Anacortes Community Forest Lands.

The trail is the result of a collaborative effort between the Skagit Land Trust, Skagit County Parks and local landowners and will become a reality thanks in part to the hard work of WTA volunteers. 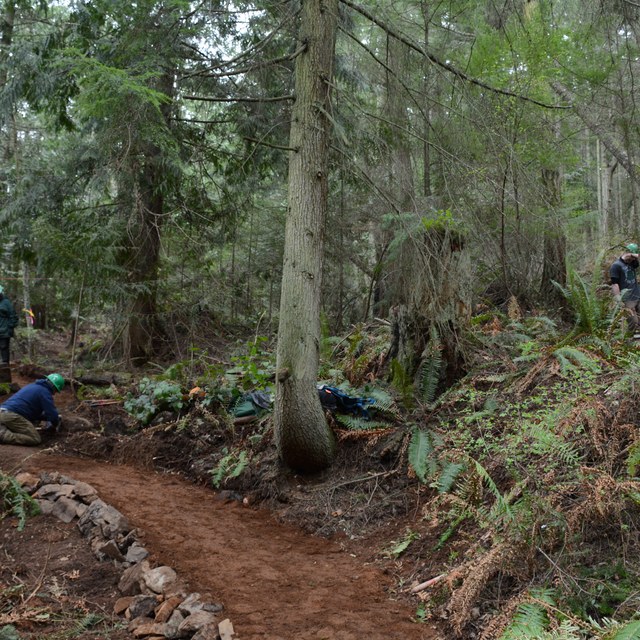 Construction began this past winter, and volunteers made great progress. The last 100 feet of the trail still needs a little finishing work, but it will be officially open to visitors beginning with a ribbon cutting on June 4.

Want to help finish it up? Sign up for one of the three remaining work parties.