Skip to content
link
Mount Rainier's Camp Muir to Get a Makeover Proposed updates to Camp Muir in Mount Rainier National Park have been given the go-ahead. Among the changes are a number of shelter upgrades and new toilets. https://www.wta.org/news/signpost/rainiers-camp-muir-to-get-a-makeover https://www.wta.org/news/signpost/rainiers-camp-muir-to-get-a-makeover/@@download/image/Guide-Service-supply-hut-and-lovely-panorama.-Photo-by-T.-Varela.jpg

Mount Rainier's Camp Muir to Get a Makeover

Proposed updates to Camp Muir in Mount Rainier National Park have been given the go-ahead. Among the changes are a number of shelter upgrades and new toilets.

National park officials have given the go-ahead to proposed updates to Camp Muir in Mount Rainier National Park. Among the changes are a number of shelter upgrades and new toilets.

The majority of climbers who summit Mount Rainier each year pass through Camp Muir, a cluster of buildings (including a bunkhouse and guide supply hut) perched on the mountain's steep slopes at 10,000 feet. Many motivated day hikers also make the challenging trek up to enjoy the lofty views.

Safety, sanitation and stone structures that blend in

Last year, the National Park said it wanted to make changes to the historic camp to improve the safety and sanitation of the site. They also wanted to address how well the structures blended in with the surrounding rocky slopes. The public was given a chance to weigh in on the changes in late summer of 2012, and there was an environmental assessment done on the site. The approved changes came out of that process.

The Tacoma News Tribune reported some of the details of the rehabilitation plan:

"The plan for Muir includes replacing the Butler Shelter and the large black box that serves as a large guided client shelter. Four new toilets will replace five existing toilets. The new toilets will get a less prominent home on the eastern side of the ridge rather than the center.

"The new shelters will be designed to match the stone-faade design of historic structures such as the Public Shelter. Inside the Public Shelter, a ventilated cooking area will be partitioned off from the sleeping quarters."

The superintendent of Mount Rainier National Park, Randy King, told the Tribune that upgrades will take between three and five years and about $700,000 to complete.

>> Read the full article from the Tacoma News Tribune 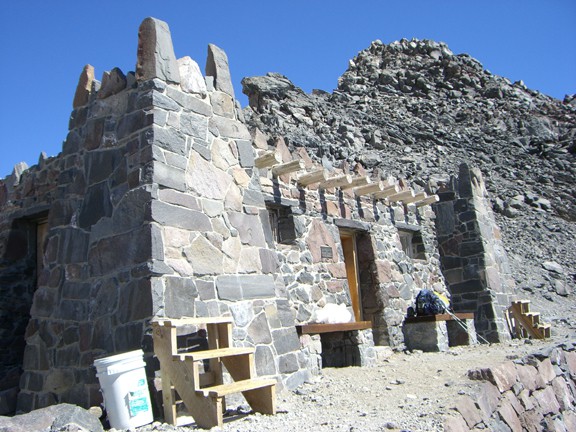 The new structures will have the look of the newer Public Hut. Photo by Blue Towel.

The correct URL for the Tacoma News Tribune's article is http://www.thenewstribune.com/[…]/national-park-service-approves.html

We've double checked the links, and they should both be working properly now.