Not too many people can say they helped to stop a highway from being built across a volcano.

Or, that they helped to name a Roadless Area. 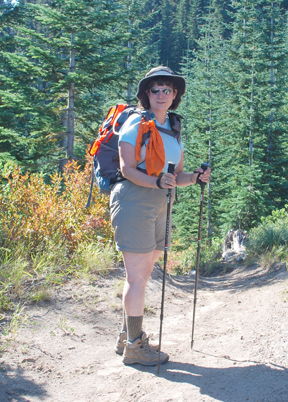 Susan Saul, an environmental advocate from Vancouver, Washington, can put a check in each of these boxes and a few more, too.

This weekend, the Mazamas, a Portland-based climbing club, will honor WTA advisory board member Susan Saul with a Richard Ward Montague Mazama Conservation Award. Their selection of Saul for this award was based on her significant efforts to establish the Mount St. Helens National Volcanic Monument, expand two wilderness areas and create four new ones during the Washington Wilderness Act of 1984, found the Gifford Pinchot Task Force, lead the Washington Trails Association advocacy program, champion protection of the Dark Divide Roadless Area, and stop the construction of a cross-monument highway.

According to John Rettig, on the Mazamas Conservation Committee, Saul’s most recent efforts looking at the long-term plan for Mount St. Helens helped the Mazamas to “get on board with this project very quickly.”

The award is named after Dick Montague, president of the Mazamas in the early 1920s and remarkable because he had lost one lung to pneumonia in the 1880s.

Saul will receive the award during an award ceremony and banquet on November 21, 2009.