Skip to content
Spooky Tales from the Trail Most of us have an unexplainable trail story or two. If that tale is told often enough, it can become part of personal — or organizational — lore. https://www.wta.org/news/signpost/spooky-tales-from-the-trail https://www.wta.org/news/signpost/spooky-tales-from-the-trail/@@download/image/IMG_9960.jpg

Spooky Tales from the Trail

Most of us have an unexplainable trail story or two. If that tale is told often enough, it can become part of personal — or organizational — lore.

If you spend enough time in the woods, eventually you encounter something unexplainable that makes your heart skip a beat. These stories often become part of personal storytelling arsenals, told over and over again beside campfires. And when these events take place on WTA work parties, they become part of backcountry lore. Like any good tale, the truth blurs over time and legends begin.

Pull up a camp chair — here’s a collection of some of WTA’s spookiest on trail stories, as told by the staff who claim to have experienced them.

A number of years ago, I was backpacking in a remote area of the Pasayten Wilderness with my partner. After dinner one evening, we were sitting above a valley looking out at the surrounding peaks. It was getting dark out. The air was still, not even a breeze. While sitting there, we suddenly heard the sound of many hooves hitting the ground below us. The sound was louder than deer hooves and sounded like horse hooves coordinated in a pack string. Even though it was nearly dark out, we didn't see any headlamps or lights around. We were camped high up on a butte and fairly open — but we didn't see anyone.

Earlier in the day we had noticed an old trail below us that must have meandered down into the valley we were sitting above. We assumed that a group might have dropped into the valley. The next day I walked down to that old trail. The ground was pretty soft and the tread was starting to fill in with grass — no hoof prints. We never saw anyone during the two days we spent high up on this butte in the Pasayten Wilderness. To this day we have no idea what created the loud sound of hooves hitting the ground. I call it our ghost horse experience. 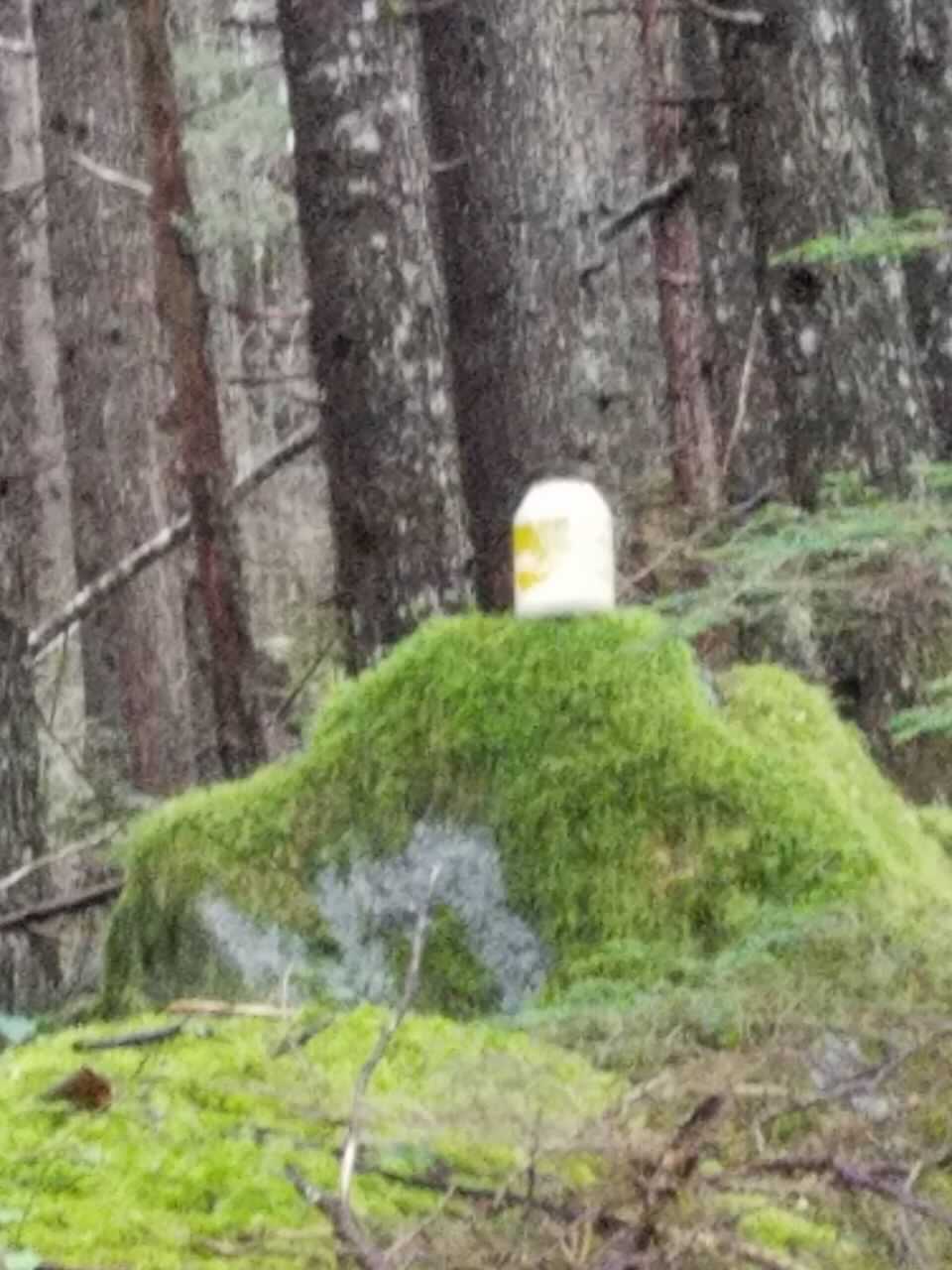 A couple of years ago, late in the fall, my friend Liz and I were hiking the Pratt River trail. This trail is long and lonely, winding through old second growth forest that follows a 1930s logging railroad grade. The trail is littered with artifacts from the logging era and we were enjoying exploring. The forest was dark and dense — we hadn’t seen another soul all day.

By lunchtime, we were almost 9 miles back from the trail head, deep in the heart of the river valley. It was raining lightly, so Liz and I ducked off the trail to find a dry spot under some low hanging branches of a large cedar tree. We couldn’t see the trail or much of anything else besides each other and the cedar boughs, but it felt cozy, so we spread out to eat our lunch. I had a tuna packet and separate mayonnaise packets and Liz had a sandwich she was adding mayonnaise to as well. I had Hellmans. She had Kraft. And so, like you do when you’re hiking, we had a long lunch conversation about the best mayonnaise brands: where we got our packets, how long they keep, if you could bring jarred mayonnaise on a backpacking trip, what we like to add them to and the utter injustice of Miracle Whip pretending to be mayonnaise. When we were done eating, we packed up and bushwhacked our way back to the trail.

As we came out of the trees, there, above the trail on a large rock... was one solitary, full size jar of mayonnaise. We hadn’t seen or heard anyone. That jar had not been there when we went off trail for lunch. Someone had heard us and left us a gift — a creepy, let’s get the heck out of here kind of gift! We booked it back to the trailhead and have ever since referred to the generous gifter as Mayonnaise Man. 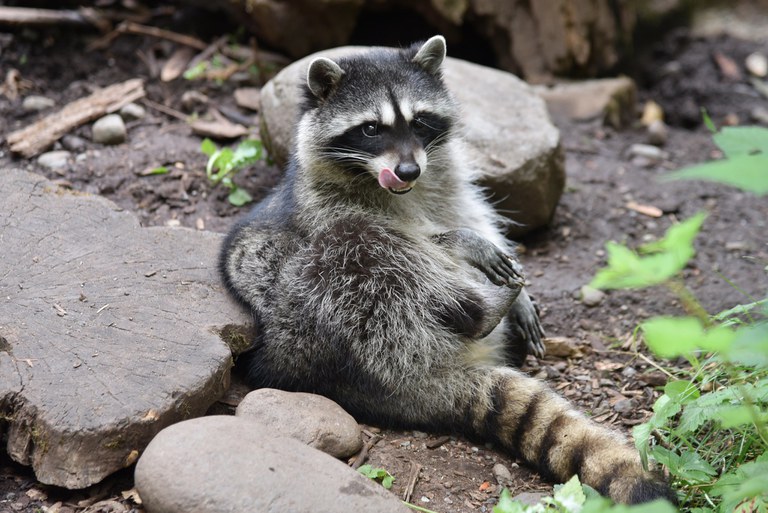 Raccoons are cuter in the daylight. Photo by Tanya Saul.

My volunteer vacation crew was camped at the Moran State Park primitive campground. One night, I was startled awake by screeching, growling and fighting sounds between my tent and the camp kitchen. After a couple minutes of wondering if I should go investigate, I slowly got out of my tent. By the time I arrived at the kitchen, the screeching had stopped. But I found a volunteer standing, eyes wide, with a big stick held like a baseball bat. She uttered just one terrified word.... raccoons! 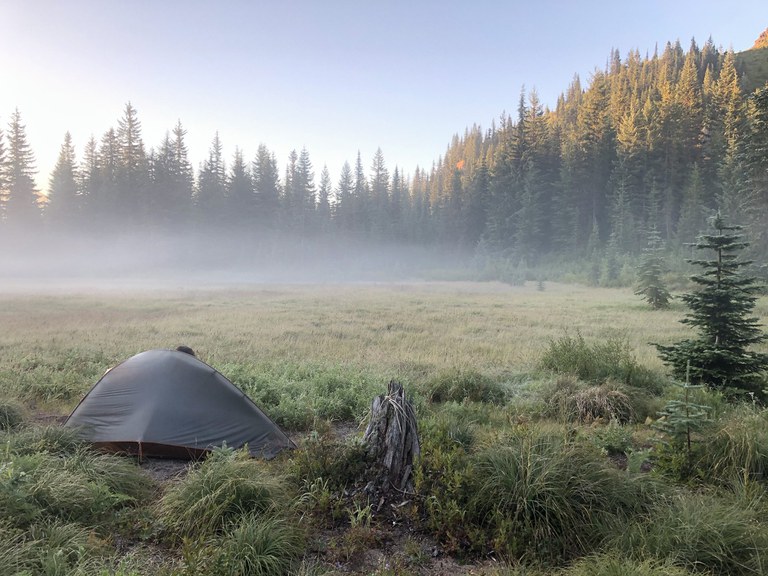 Camping along the Boundary Trail in the Dark Divide. Photo by Ricky Smidt.

In the summer of 2019, an intrepid trail crew and I were working in an area of the Gifford Pinchot National Forest in Southwest Washington known as the Dark Divide. After a successful day of work, we went on a recreational hike to kill some time before dinner. As we explored, a volunteer spotted a blue object just across the river but could not make out what it was. Thinking we were alone on the backcountry trail we decided to investigate. Once across the river we discovered the blue object was a tarp and quickly realized we had stumbled upon what looked like an old camp. As we checked out the site, a crew member spotted a hole in a nearby tree and looking more closely discovered a green thermos with lukewarm soup and a fresh russet potato. Realizing we were likely snooping around someone’s camp, we quickly left and headed back to our own for dinner.

Over dinner, we chatted about our odd find and chalked it up to a local mineral claim camp. The next morning I was alerted that one of the crew had awoken to something odd: a russet potato placed outside their tent. Bemused, the volunteer asked me to check if one of the other crew members was playing a prank. No one confessed to the potato prank and so the crew went on packing up camp, and getting ready for their hike back to civilization.

Once the trip was completed, we agreed to meet at a local watering hole for some post-trip burgers and beverages. When it came time for everyone to place their order, and it finally got around to me, I joked with the waitress and asked “Are there any local folks that like to prank trail crews by leaving potatoes at their camp”? At those words, the whole place went silent. You could hear a pin drop. I apologized thinking, I had offended someone with my joke. With a grave face, the waitress told us of all the hikers and backpackers that have disappeared in the area over the last 15 years. Each tale was the same: no missing gear or signs of foul play…the only thing that tied the disappearances together was a single russet potato found in or near the camp. She departed with a word of warning to be careful out there, and to feel lucky we had survived our run in with the POTATO MAN.

When working in this area, I recommend all volunteers and hikers add sour cream and chives to their essential gear list.

Have a spooky (BUt fun!) trail Tale to Share?

Tell us about it in the comments!

Adam_G on Spooky Tales from the Trail

Not in the Cascades at Rocky Mountain National Park. We were camping in a secluded backcountry campsite when I woke up around dawn to pee. I put on my headlamp and walked into the trees. There I saw two glowing eyes around 5 feet off the ground staring at me. I then saw the sillouette of very large antlers. It was a moose, dangerously close to me. I carefully returned to the tent and sent back to sleep. I awoke after sunrise to return to the same spot. There I found a skeleton of a moose. And thus started the legend of the Ghost Moose.

seniorhiker on Spooky Tales from the Trail

Not as creepy as some above. Camping with a friend just east of Pasayten in the early '70s - just after dark in our tent we hear these slow soft thuds outside, about two seconds apart. There would be 5 or 6 thuds then nothing, then start up again. They quit after a while - I forgot about it and went outside to check on something with no flashlite. When I turned around there were a pair of eyes on my level and a couple feet away. I dove into the tent (as if that would save me). The next morning we laughed as we notice all the horseshoe prints around us - just a poor lost horse.

HDerr on Spooky Tales from the Trail

Last year on Halloween, I did a solo hike to Summit Lake. I hike solo most of the time, I bring my cattle dog Cooper with me. I have never had any issues being alone in the wilderness or the dark. I always research my hikes, pack my 10 essentials, and am fully prepared for most situations. I set off from the TH in the dark, in front of a group of 3 guys. I was well ahead of them, but kept them within earshot in case I encountered an animal on the trail.

I was about 2 miles in before I felt like I was being watched. I stopped, the hair stood up on the back of my neck. Then I heard.....absolutely nothing. No birds, no trickling water from the creek below, not even the voices of the guys behind me; just my heart pounding in my ears. I continued on, thinking I was just psyching myself out because I was FINE like 5 minutes before that, hiking solo in the first hour of the morning light. Then I heard what sounded like big, thudding footsteps behind me on the trail. I snapped my head back, ready to see a trail runner that snuck up behind me....but no one was there. I shuffled a little faster along the trail this time, and heard the unmistakable sound of thudding footsteps AGAIN. I whipped around this time, ready to face whatever was gaining on me. Absolutely no sign of anything at all.

I tried to rationalize what I’d heard and experienced. It definitely was not a grouse or a woodpecker. For an experienced solo hiker, this was one of the freakiest things that has ever happened to me. My friend was convinced it was some invisible entity she has read about from others’ experiences. As for me, not a clue…I still get chills when I think about the experience though