Tacos for the Trail

In celebration of National Taco Day, we bring you some the WTA staff's favorite riffs on trail tacos.

In celebration of National Taco Day (which, honestly, could be every day), we decided to bring you some WTA staffers' favorite riffs on trail tacos. But when we asked about the tacos our staffers take hiking and make over camp stoves, it turned into a broader conversation that (of course) included burritos and fajitas.

So, while Sunday, Oct. 4 may be National Taco Day, what follows is a meandering love letter to tacos as hiking food and their culinary cousins.

One of the perfect hand-held foods, to-go tacos travel well in a car as long as they aren't overloaded. They can be breakfast in the dawn hours or can refuel you after a day on trail. Often the best tacos are served out of trucks and to-go windows, making them particularly well-suited to take-out.

What's your favorite taco spot in Washington? Share it in the comments.

For car camping, some prep work at home can take car camping or canoe camping to the next level.

Taco purists, look away. The beauty of the taco is how many different ways you can riff on it. Including in a few directions we didn't see expect. 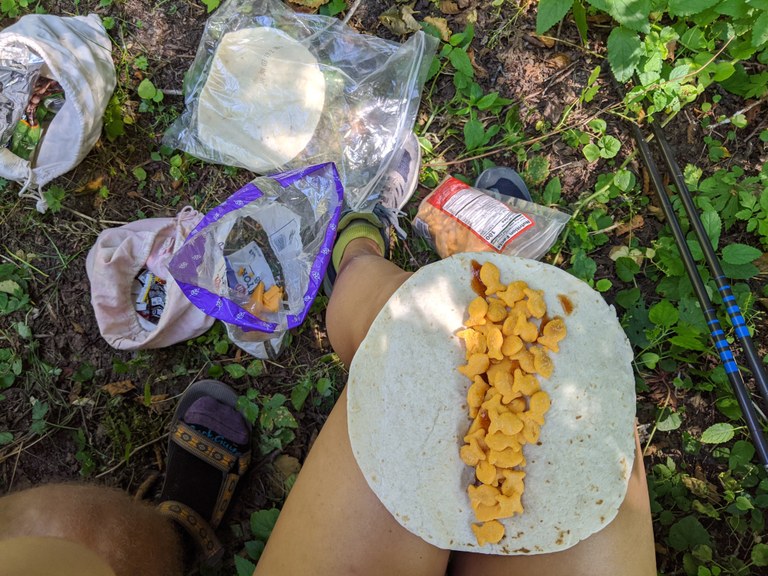 Salty, spicy and cheesy. Janée Romesberg might just be onto something with the goldfish taco.

For many, a taco is not a taco without one or two key ingredients, sauces or toppings. From perfectly prepared nopales or pickled onions to Cholula or crema, one topping often makes the taco. If you can't haul ten jars of toppings with you on trail, what is the one thing that makes your trail taco perfect? Let us know in the comments below.