Skip to content
Then and Now: Variable Winters Mountain snowpack changes how hikers access higher elevation trails. With a return to normal snow amounts in 2016, it may be a bit longer before hikers can enjoy certain areas. https://www.wta.org/news/signpost/then-and-now_variable_winters https://www.wta.org/news/signpost/then-and-now_variable_winters/@@download/image/b2ec538c-2cfe-4333-ba22-71e1b70be252.jpeg

Then and Now: Variable Winters

Mountain snowpack changes how hikers access higher elevation trails. With a return to normal snow amounts in 2016, it may be a bit longer before hikers can enjoy certain areas.

When snow begins to fall in the mountains every winter hikers are left with a choice: seek lower elevation trails, or don snowshoes and embrace the cold. In 2015, that choice wasn't too difficult; an incredibly low snowpack in Washington's mountains created favorable conditions for hiking nearly year-round at higher elevations, but it came at a cost to the forests and winter recreation.

When spring arrives, it signals that some of our favorite trails will soon be accessible and warmer weather is on the way. However, just because it's sunny and 70 down in lower elevations doesn't mean you won't be facing snowy conditions up high. This year's snowpack levels were slightly above average, which means things won't be at all like last year where you could hike nearly any trail before summer officially started. If you do decide to hike in higher elevations this spring use caution, as unstable snow can be dangerous.

With early melting and hardly any snowfall in 2015, hikers were treated to snow-free Olympics hiking early in the season. In fact, trip reports from Mount Ellinor as early as February were showing that the trail had very little snow. 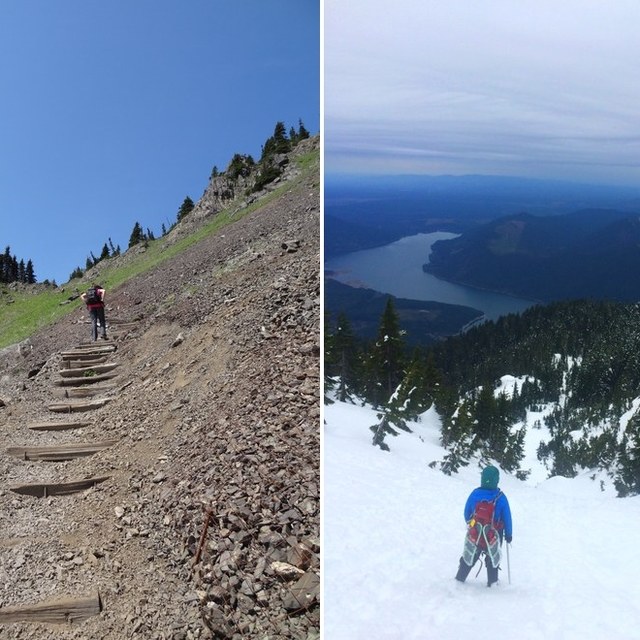 As of mid-April, the Mount Ellinor trail is still under a decent amount of snow, and most hikers are choosing to use snowshoes. This shows just how variable winters can be in Washington, which in turn effects how hikers approach trails.

Keep in mind that even if a trail is accessible, it doesn't mean it will stay like that all spring. The Olympics and Cascades have been known to get snow storms in spring, so always hike prepared for changing conditions. Also be sure to check road and trail conditions before heading out. Trip reports are a great way to get an idea of current conditions.

As hikers gear up for another year of hiking, we'll wait to see what winter brings in 2017. Will it be another year of snow-free trails, or will we need to wait out the melt?

Read more about our history and anniversary at wta.org/50