WTA volunteers give back to trails all year long, but on National Public Lands Day, they were joined by thousands of other volunteers across the country in a national event that has been going on since 1994.

The largest work party took place on the Wonderland Trail near Sunrise in Mount Rainier National Park, where 28 volunteers helped with essential maintenance of the popular trail. One work party took place as part of a week-long Backcountry Response Team trip on the Duckabush River Trail, continuing repairs on the now-open trail. It closed after a wildfire last year. Another work party took place at Holden Village, where a crew of Volunteer Vacationers spent the week in annual repairs around the backcountry community. 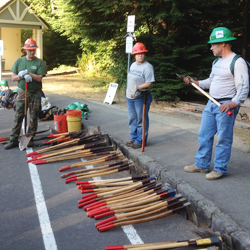 Before heading out to build the new Ape Cave Viewpoint Trail, volunteers get a safety briefing. Photo by Ryan Ojerio.

A huge thanks to all the volunteers who donated their time on National Public Lands Day and throughout 2012.

Give back and hike the improved trails

Sign up for a fall trail work party and hike the newly-improved trails: