Behind the Scenes of Hiker Rally Day 2019

Behind the Scenes of Hiker Rally Day 2019

I'd been organizing WTA's Hiker Rally Day for months. But Hiker Rally Day 2019 didn't become real for me until I joined more than a hundred hiker advocates in Olympia on Feb. 19. | By Christina Hickman, WTA's advocacy associate

I'd been organizing WTA's Hiker Rally Day for months. I'd replied to hundreds of emails and set up 126 meetings with elected officials. But Hiker Rally Day 2019 didn't become real for me until I joined more than a hundred hiker advocates in Olympia on Feb. 19.

My rally day started off with a 6 a.m. crosstown ride to meet my Seattle-based coworkers to carpool to Olympia from Seattle. The weather was classic February — chilly and rainy — but not yet snowing. We were ready with a snow contingency plan after back-to-back weeks of the white stuff wreaking havoc in the Puget Sound region.

By the time we reached the capital, the rain had stopped, and the work began. (Can I just give a shout out to the awesome staff at WTA for waking up extra early and arriving from all all over the state on time? Quite the feat for a crew of 20.)

The time spent between setting up and opening the doors at 9 flew by! In an hour, we transformed the room from empty space to this: 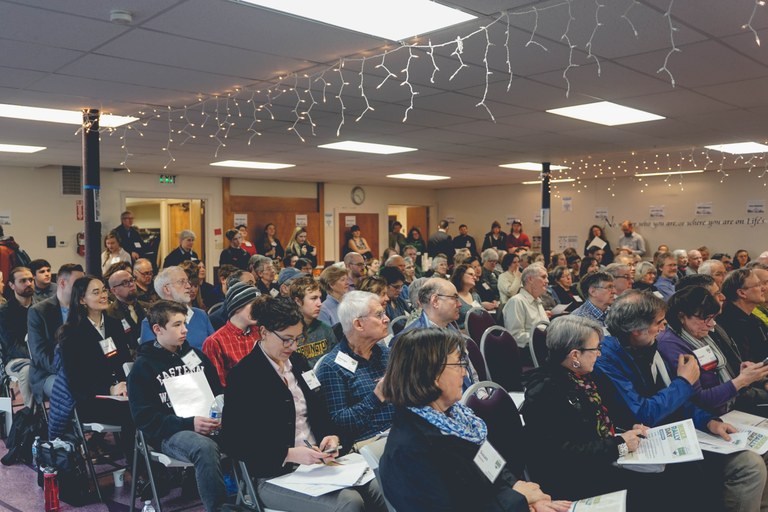 Hikers listen to opening remarks in the during the morning program. Photo by Britt Le.

More than 150 hikers from all over the state showed up to rally with us and for trails. And by all over, I really mean all over. We welcomed Rex from Spokane, Syren from Forks (and make sure to check out her Instagram, @disabledhikers), a large group of youth from Darrington and two cars from Vancouver, to name a few. In total, we had folks representing 36 districts — that’s more than 70 percent of Washington! 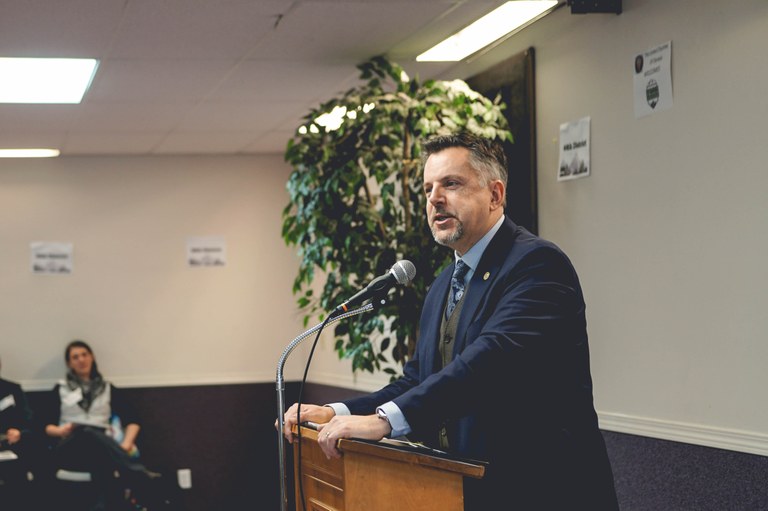 "Once lost, we can never get them back."

"We have made our landscapes, our great outdoors important to care for and protect," Commissioner Franz told the crowd. "We have known that once lost, we can never get them back. We have also known that in the most challenging and troubling of times, whether it meant trying to feed our families, provide jobs, educate our kids or when our country was at war that the thing that gave us all a sense of peace, a sense of comfort and a sense of national connection was our public lands." 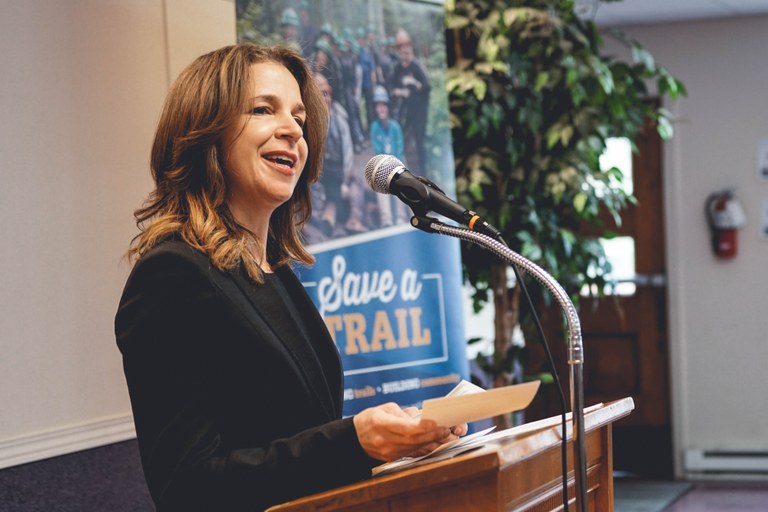 WTA’s policy and planning manager James Moschella and lobbyist Erin Dziedzic teamed up to explain how to talk to your legislators.

The idea of talking to elected officials can be intimidating. Even though you're constantly being told that they are “normal people, just like you,” there’s just something about meeting with a person in power on their turf that made the first time rally-goer introvert in me squirm a bit — and I'm sure others, too. Thus, the briefing.

James and Erin walked through our legislative priorities and funding asks. In less wonky terms, every two years, the state legislature creates a capitol budget to fund all state agencies. Without these funds, the agencies and nonprofit partner organizations (like WTA) can’t fully meet the needs of those getting on trail.

This year our priorities including funding for state agencies like Washington State Parks and Washington Department of Natural Resources (DNR), Washington Wildlife and Recreation Coalition (WWRC) and No Child Left Inside, all of which you can read more about on our blog. These agencies, programs and policies are vital for keeping the outdoors accessible to all and trails maintained to the safest standards to be enjoyed by our community and other outdoor user groups.

"Having these details taken care of made it easy for me to concentrate on meeting fellow hikers and talking to my legislators about the places that mean the most to me," said Jackie Dagger, hiker, climber and first time Rally Day attendee reported, of the information provided by lobbyist Erin Dziedzic and WTA's James Moschella.

Lobbyist Erin Dziedzic trains hikers on the issues and the basics of rallying for they places they love. Photo by Britt Le.

In addition to the legislative agenda, we also urge hikers to talk about their own experiences on trail. Why do they hike? What do the outdoors mean to them?

For me, hiking allows me to center myself. The trail has been my companion during really difficult and lonely times — when I lost my grandmother, when I was new to Washington and didn’t have many friends here, when I was deeply struggling with my obsessive compulsive and eating disorders, when the stress of grad school weighed me down. The trees and fresh air comforted me.

The trail has been my companion during really difficult and lonely times ... The outdoors has provided me with some of my favorite parts of my Washington life.

The outdoors has provided me with some of my favorite parts of my Washington life. They've connected me to a rad group of womxn explorers, some of whom are now close friends. And as you may have gathered, my love of hiking helped to inform my career path, too.

The combination of the stats and information that Erin and James explained and these personal connections create powerful examples that stand out to elected officials after a long day of talking to lots of other people.

The large room of hikers broke up into smaller groups by legislative district to talk about the stories they’d tell.

Not to be confused with your congressional district (which is federal), each of the 49 legislative districts in Washington have two state representatives and one state senator. These are the three officials you get to meet with on rally day. If you don't know your representatives (no shame in not!), this handy tool can tell you.

Soon enough, it was time to hike to the Capitol campus. Honestly this half-mile walk was one of my favorite parts of the day. The energy was palpable as we made our way to the steps for a group photo, stopping traffic even. A rally-er suggested next we should have a hiking chant in 2021. I agree.

It’s not an easy task to wrangle a group of independent-minded hikers, but nonetheless, I think our group photo (sans about 30 hikers that were already off in their meetings) was a rally great success.

James leads the group to the Capitol campus. Photo by Britt Le.

The group on the steps. Photo by Britt Le.

12:00 — Meet with your representatives

The afternoon portion of the day is less structured and very dependent on what district you’re in. This is where those 100 or so meetings I mentioned earlier come into play. Upon check-in in the morning, each person is given a folder with their schedule for the day, map to find their meetings, and short biographies of their elected officials and handouts to leave behind. Each legislator meeting is about 15 minutes long.

Sometimes you will meet with the elected official’s legislative assistant — who are extremely knowledgeable and help to keep elected officials up-to-date with all kinds of issues since they can’t be an expert in every area — and sometimes you’ll just have to drop off the materials for the legislator to read at a later date (many of them are in committee meetings all afternoon, I learned).

In the time between meetings, we hunkered down at our pop-up hiker basecamp — several tables we staked out in the corner of Pritchard Library, which is cafeteria/gathering space on the capitol campus. I split my downtime between talking with hikers at the basecamp and walking around the campus, beautiful even on a gray day. 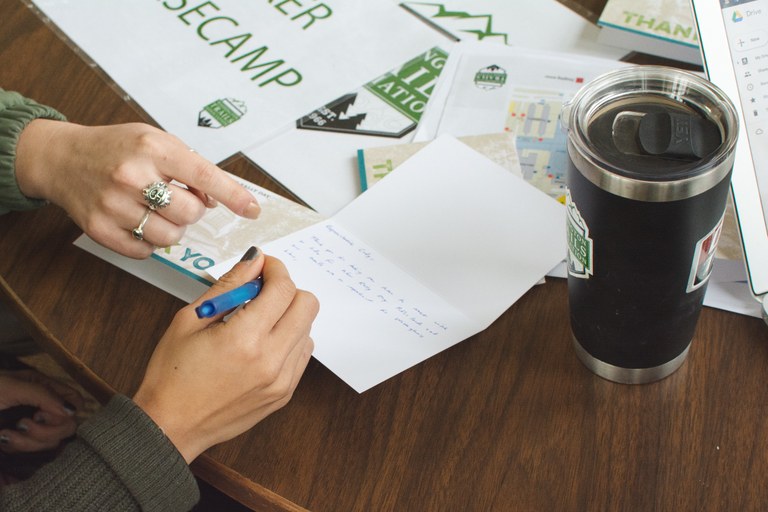 As I walked over the the John A. Cherberg Building, I took deep breaths. I'd imagined an elaborate meeting room and stuffy disinterested politicians. Instead, I was greeted with a plain conference room and an engaged senator.

Everyone in my group spoke and made the case for trails, referring to the issues we'd all been briefed on earlier, and adding our own experiences. Sue Olson, a long time WTA trail maintenance volunteer, talked about how important getting outside has been for her. WTA Field Operations Manager Tim Van Beek illustrated how the funding made an impact on WTA's ability continue our trail maintenance. My senator nodded and told us how much he appreciated us coming, and shared that he was a hiker himself. Our next meeting went similarly.

"Two of our three representatives that we met with use our trails on Grand Ridge and Tiger Mountain on a regular basis!"

"What was memorable about this Rally Day was that 2 of our 3 representatives that we met with use our trails on Grand Ridge and Tiger Mountain on a regular basis!" Brian Peterman, a WTA ambassador, trail work volunteer and member. "They knew all about Washington Trails, and they knew how much these trails meant to them, their families, and their lives. One could tell that what they were telling us was heartfelt. And that felt really good to me." 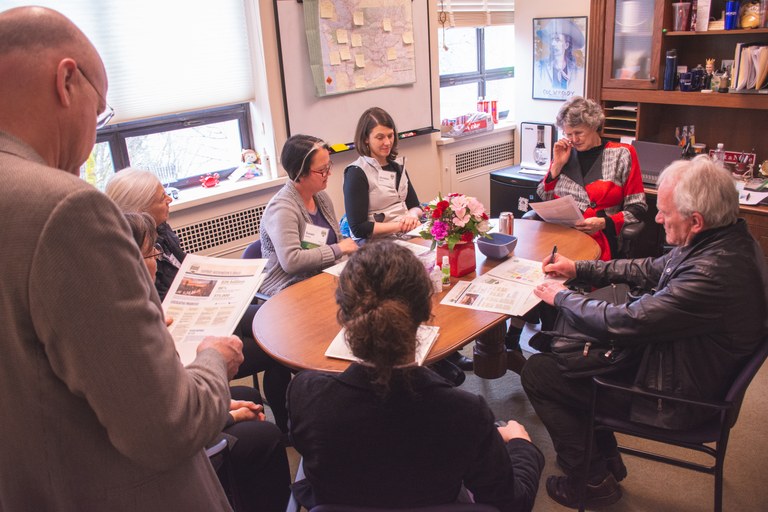 Hikers in a meeting with Representative Eileen Cody of the 34th district.

In between meetings, I chatted with my district-mates about where they lived and learned a bit more about them. Sue had lived in the same house in Magnolia neighborhood of Seattle for more than 30 years. Hiker Justin Kato and my coworker Whitney Allen, who live in the Greenwood and Ballard neighborhoods respectively, connected with Senator Noel Frame over the light-up Phinney Monkey she had in the window of her office.

Here we were, a group of almost strangers, bonding over our collective connections

Here we were, a group of almost strangers, bonding over our collective connections not only to the outdoors but our proximity to each other on a daily basis. It made this big city, and state, feel smaller, in the best of ways.

This was one of my unexpected takeaways of the day, something that I observed back at basecamp too — when people come together to support a common cause (in this case, hiking), they're likely to find they have more in common than just that single thing. Maybe people even found some new hiking partners.

A group of advocates, including former WTA youth ambassadors, show off their Rally Day "hiking" footwear. Photo by Britt Le.

As I walked back to basecamp after my last meeting, I felt different. Maybe it was because I realized I could exhale after a long 3 months of planning. But it was more than that.

I watched as hikers crisscrossed the campus, high-fiving other hikers en route to meetings, people who’d been strangers just a few hours ago. I watched as the thank you cards to elected officials piled up at basecamp. I watched as new friends hugged before parting ways.

I watched as hikers crisscrossed the campus, high-fiving other hikers en route to meetings, people who’d been strangers just a few hours ago.

This is why we do what we do.

Hiker Rally Day is about connecting voters to their representatives, and it’s about teaching people how to make a case for funding. But at its core, it’s really about connecting and creating community. It’s about the power of the collective voice to impact change. And it’s about gathering people not only from all different parts of the state but from different backgrounds, beliefs and political views in a one place, and realizing that because they love the outdoors, they have a lot more in common than they might think. And that’s something they can carry until the next rally day, and beyond. 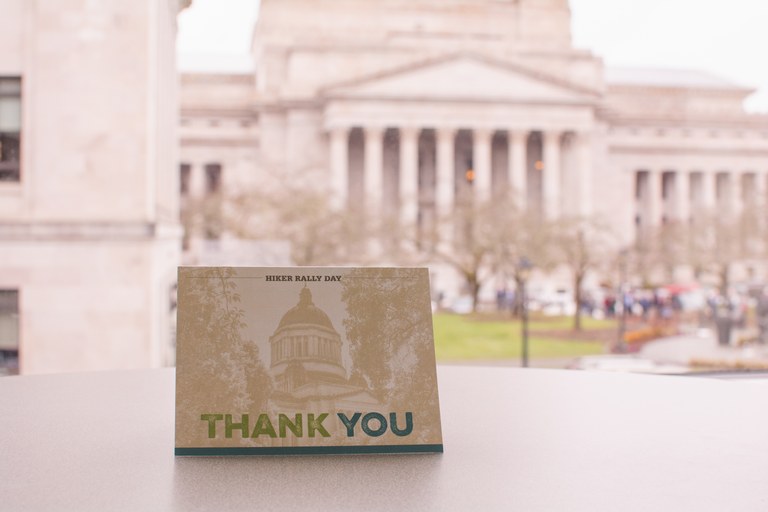