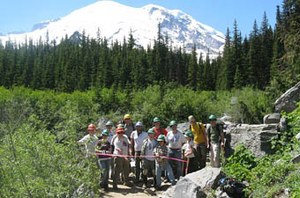 WTA volunteers cut the ribbon on July 31, 2011 - the 151st and final day of work on the Glacier Basin Trail. Photo by Lynn Kittridge.

Located in close proximity to the dynamic, glacially-fed White River, the original Glacier Basin trail has been frequently damaged by the river’s shifting course. During fall 2006, severe floods decimated significant portions of the lower trail. Rather than repair the damage, park authorities opted to build a new trail — one that would not be subject to the river’s frequent flooding. Design, layout and permitting for the trail started in 2007 and carried on into 2008. The replacement trail was to be built on the steep hillside above the river’s floodplain and stay true to its original character with a straight, steady, gradual grade. 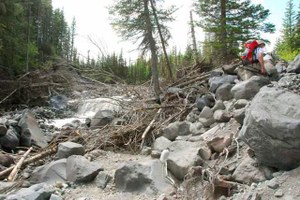 The floods of 2006 changed the course of the Inter Fork of the White River - right on top of the trail to Glacier Basin. Photo by Bob and Barb.

To carve this kind of trail out of a mountainside would take a Herculean effort. With more than 6,500 feet of high quality trail needed, the national park service looked to its own trail crew and beyond, to groups such as WTA, to make a trail that would traverse steep, heavily wooded terrain, crossing numerous streams and avalanche chutes along the way. 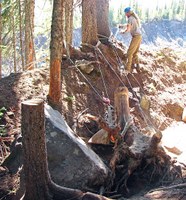 The Park Service trail crew logged out a rough trail corridor for the construction crews to follow. At that point, WTA crews stepped in - removing thick layers of duff, digging out stumps, removing rock. There were stumps so massive that it took days to get them out. Using shovels, pulaskis, pinch point bars, grip hoists and a lot of sweat, volunteers found and removed every rock that stuck up into the trail. Some rocks even needed to be blasted out (not by our volunteers).

We cut and cut, and gradually a trail 3 to 5 feet wide emerged. To maintain the straight and steady grade, all low areas needed to be filled in. Remember those rocks we dug up or blasted out of the trail? We brought them back to raise the tread level in low spots, to construct outside retaining walls and to backfill those walls with rubble. In some areas, these walls are more than 6 feet high and 50 feet long. Volunteers cut the backslope to precisely 45 degrees (okay, approximately 45 degrees) in order to minimize erosion and, finally, to create a durable tread surface, they ensured that a thick layer of mineral soil covered the entire trail.

This entire process entailed a huge amount of human effort and dedication. The results can be seen along every foot of this spectacular new trail.

The history and construction details of this trail are only part of the story. Even more, it is a story about the people who helped to build it. This trail came to life through a cooperative effort between the National Park Service, former Mount Rainier trails supervisor Carl Fabiani, the very supportive and talented White River trail crew, youth crews from several different state and national organizations and a host of individual volunteers, the majority of whom came to the project through WTA. 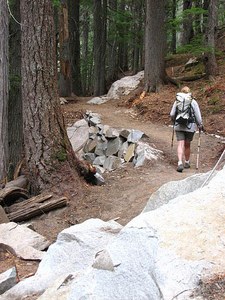 A hiker walks along the new stretch of the Glacier Basin Trail. Notice the rock and fill work done by WTA volunteers. Photo by Mike Hardy.

WTA led 121 single day work parties and six volunteer vacations at Glacier Basin. We recruited more than 400 individuals, who in turn, spent more than 17,450 hours constructing this trail. Many of these volunteers came out for a single day, while others appeared on the scene time and again.

For the past four summers, these volunteers gathered in the climber’s parking lot at the White River Campground, listened to the safety talk and learned about their tasks for the day. And each day the new Glacier Basin Trail inched a little further forward. At times, progress seemed almost glacial, but folks have enjoyed the experience knowing that their contribution was truly a vital part of completing the project. In the end, we have constructed a truly great new trail in Mount Rainier National Park.

WTA is both proud and indebted to all of those people who have helped in this effort - and we're in awe of the dogged persistence and great attitudes we have seen over the years. If you get a chance to hike this trail, you too will be truly impressed.