Explore the miles of trail that weave through the 240-acre Grand Forest on Bainbridge Island. The relatively flat trails are also used by horses and mountain bikers. Continue reading

13 Trip Reports for this trail

Email
The trails at Grand Forest can be enjoyed anytime of the year. Photo by JoeHendricks. 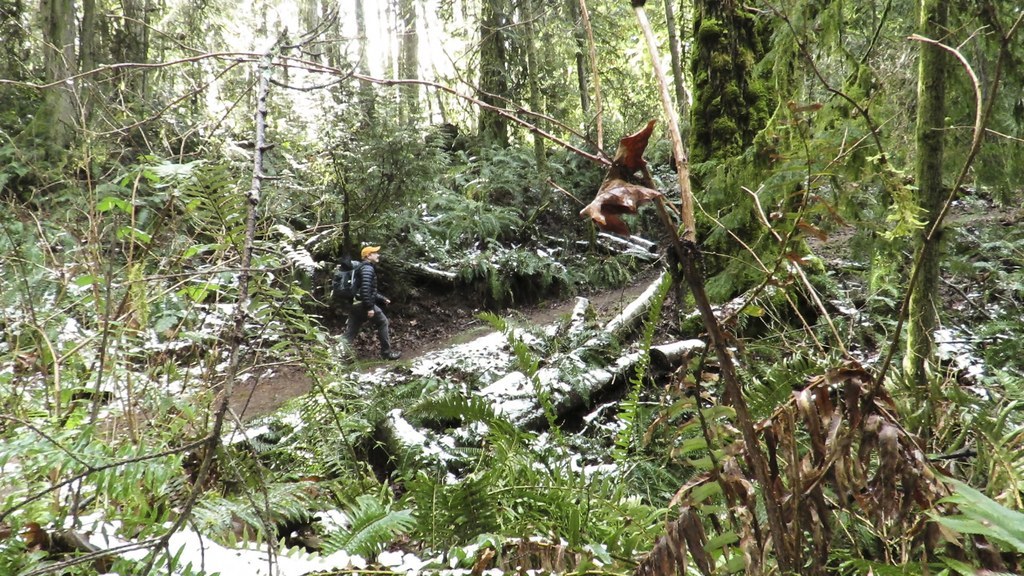 Tucked into the middle of Bainbridge Island, this extensive network of trails is one of the most popular for folks who live around here. And with over seven miles of winding and looping trails, there is plenty to choose from.

The Grand Forest is broken into three sections: the west, east, and north. The west and east are both large parcels that form one continues piece thanks to the Hilltop Connector Trail that acts like a bridge between them. The northern section is a much smaller parcel that is set off from the rest of the park without a connecting trail. Because of this, the east and west are the most visited.

Both the west and the east sections have a main loop trail with many smaller spur trails branching off. These sections are in a second growth forest with the occasional wetland or stream crossing. The Hilltop connector is a short section where the trail leaves the trees and enters an open, grassy meadow.

There are several intersecting trails and turns in this park, so it’s a good idea to bring a map (find one at biparks.org). Waypoint markers along the trail will help you find where you are on the map.

The trails in this park also make up an important link the Cross Island Trail which runs the entire width of Bainbridge Island. So, if you are looking for more miles, you’re in luck. The Forest to Sky Trail extends from the Grand Forest West entrance to Battle Point Park and beyond; the McRedmond Trail leaves from the eastern edge of Grand Forest East to connect with McRedmond Road.

For Grand Forest West:
From the Bainbridge Island ferry dock, drive north on WA-305 for 1.6 miles. Turn left onto Madison Ave. and then quickly take the first right onto New Brooklyn Road. After 2.0 miles on New Brooklyn, turn right onto Miller Road for 1.1 miles and the parking area will be on your right. The sign will say Grand Forest West. Parking for 8 cars, no restrooms.

For the Grand Forest East:
From the Bainbridge ferry dock head north on WA-305 for 1.6 miles, then turn left onto Madison Ave. Quickly take the first right onto New Brooklyn Road for 1.2 miles, then turn right onto Mandus Olson Road for 0.5 mile, then you will arrive at the parking area straight ahead.

Route 95 stops at the intersection of Miller Road and Tolo Road, which is 0.25 mile from the parking area for Grand Forest West.