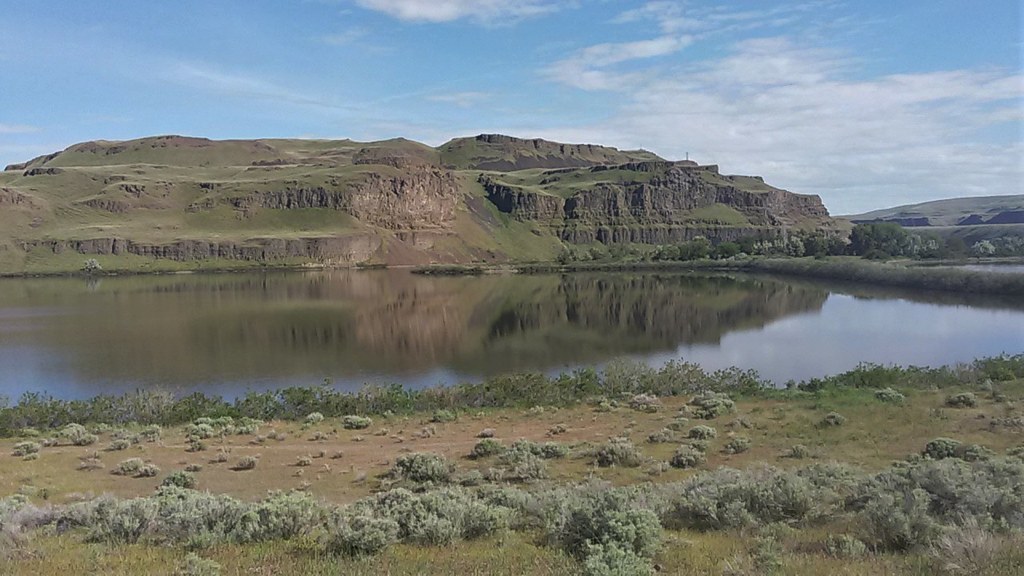 11 Trip Reports for this trail, below

Excitement on the Palouse River occurred in the early 1960s when an archaeologist from Washington State University found human remains and an old rock shelter along this stretch of the river. The remains were estimated to be more than 10,000 years old, but when the Army Corps of Engineers finished construction of the Lower Monumental Dam on the Snake River, the site was inundated, despite a large berm that was built to protect the site.

Today, a faint and narrow trail leads to the pond, which is stocked with trout by the Lyons Ferry Fish Hatchery. Visible on sunny days as you hike, they float near the surface, occasionally breaking through to snap at a gnat or fly. Bring your pole, that’s for sure.

From the parking area, head north, up and over a small hillock featuring a picnic table and a dog play area. Pass two bathrooms that may be closed (the park’s facilities are in the direction opposite to the one that you’re walking). Continue on to a large kiosk and another small parking area. You may wonder why you didn’t just park here. There’s far less room at this lot, and the nearby locked gate indicates that the road behind it is for staff use only. Stick to the parking area near the water.

Take a look at the kiosk at this lot before you leave. A large map shows you the land ownership of this area and you’ll also see your trail, a little dotted black line that takes off half a mile up the paved road. Note that most of your hike takes place on land established as the Lyons Ferry Habitat Management Unit. Hunting is allowed here, so be aware and wear your orange.

The trail roughly follows the maintenance road, owned by WSDOT. Parallel the road first, just east of a railroad track. If you’re lucky enough to have one come through as you hike, you’ll have a great photo opportunity of it as it crosses the trestle bridge behind you.

A mile and a half from the kiosk, the trail begins looping east, around a large rocky outcropping. The rocks in this outcropping soar feet hundreds of feet above you – it’s impressive from any angle. Enjoy it as you come around to the east side. From here, the trail beings to wend between many other smaller outcroppings in classically spectacular Channeled Scablands topography. Keep an eye out here for wildflowers and rattlesnakes. In summer, these cleverly camouflaged reptiles enjoy sunning themselves on the trail and in the brush to either side.

Other wildlife call this area their home. Listen for kestrels and crows, and underfoot, keep an eye out for scorpions and porcupines as you make your way along the trail.

It’s two miles to Marmes Pond, where you’ll be able to sit and take a rest in the warm sun, maybe even cast a line. Be considerate of other anglers, though, and refrain from swimming here. Views are gorgeous, where the bluffs of the scablands meet the rolling hills of the Palouse.

Looking downriver, you may see a very faint path beneath the east side of the high bluffs and outcrops you passed on your way in. This is a narrow, overgrown bootpath that does offer an alternate way to return to your car, but it can be precarious in spots, and a missed step could mean a long fall.

From Dayton, drive on Highway 12 north for 14 miles. Turn left onto two land SR 261 and proceed 14.5 miles. Cross the Snake River over a narrow bridge, looking for the Lyons Ferry State Park entrance. Hang your Discover Pass before taking off! 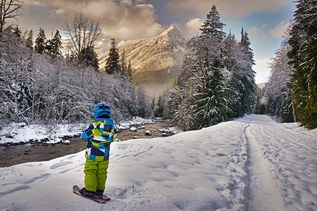