When you know you’ve got a few hours left in your group hike or you’ve reached a particularly steep or difficult section of trail, sometimes it's nice to have a distraction. Trail games are a great way to keep everyone’s mind off the pain and on something else. And a lot of games can be played both during your hike and at camp. Plus, they’re fun!

Some games work great for young kids, but here are some (slightly more complicated) games that might work better for groups of older kids, teenagers and adults. They are all verbal games, and most can be played while hiking. 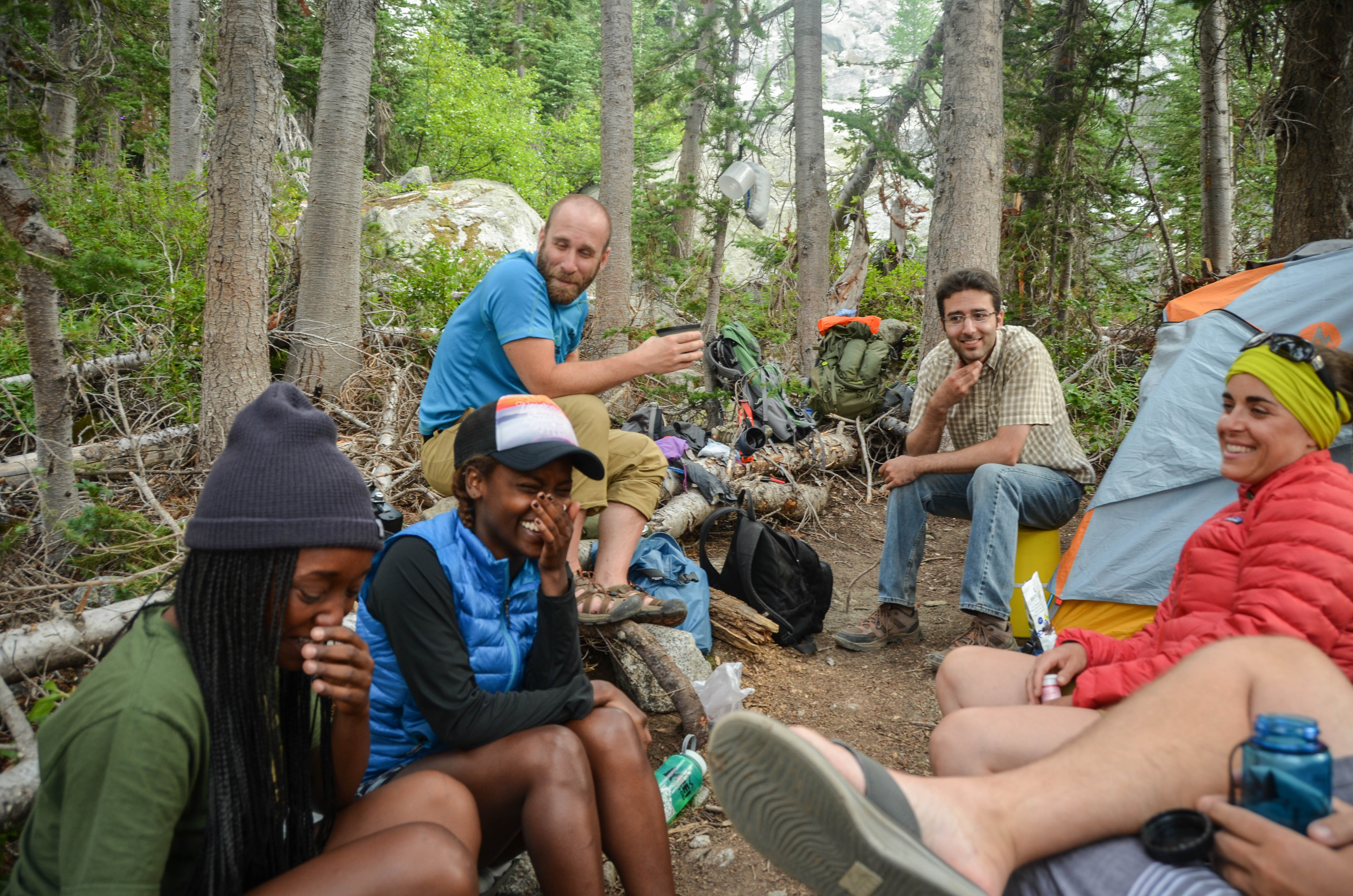 Games that are fun while hiking can also be fun when taking a break or hanging out at camp. Photo by Joy Cross.

This is a fun guessing game where you only need one other person to play, although it can be fun with more people.

One person, the Word Master, thinks of something, a noun! As an example, our Word Master chooses, "Canada." Then, they answer the question, “Is it more like ketchup or mustard?” (Not always an easy question to answer.)

This game can be very difficult depending on what the target thing is, but can also be very silly, like when you’re trying to figure out if Canada is more like a microwave or a cat.

A trail favorite! Contact is a more involved game, but allows everyone to participate.The instructions are a lot at first, but game play goes quickly and easily once you get the concept. You will need at least three players. One player is the Defender, and everyone else works together to guess the Defender's word. 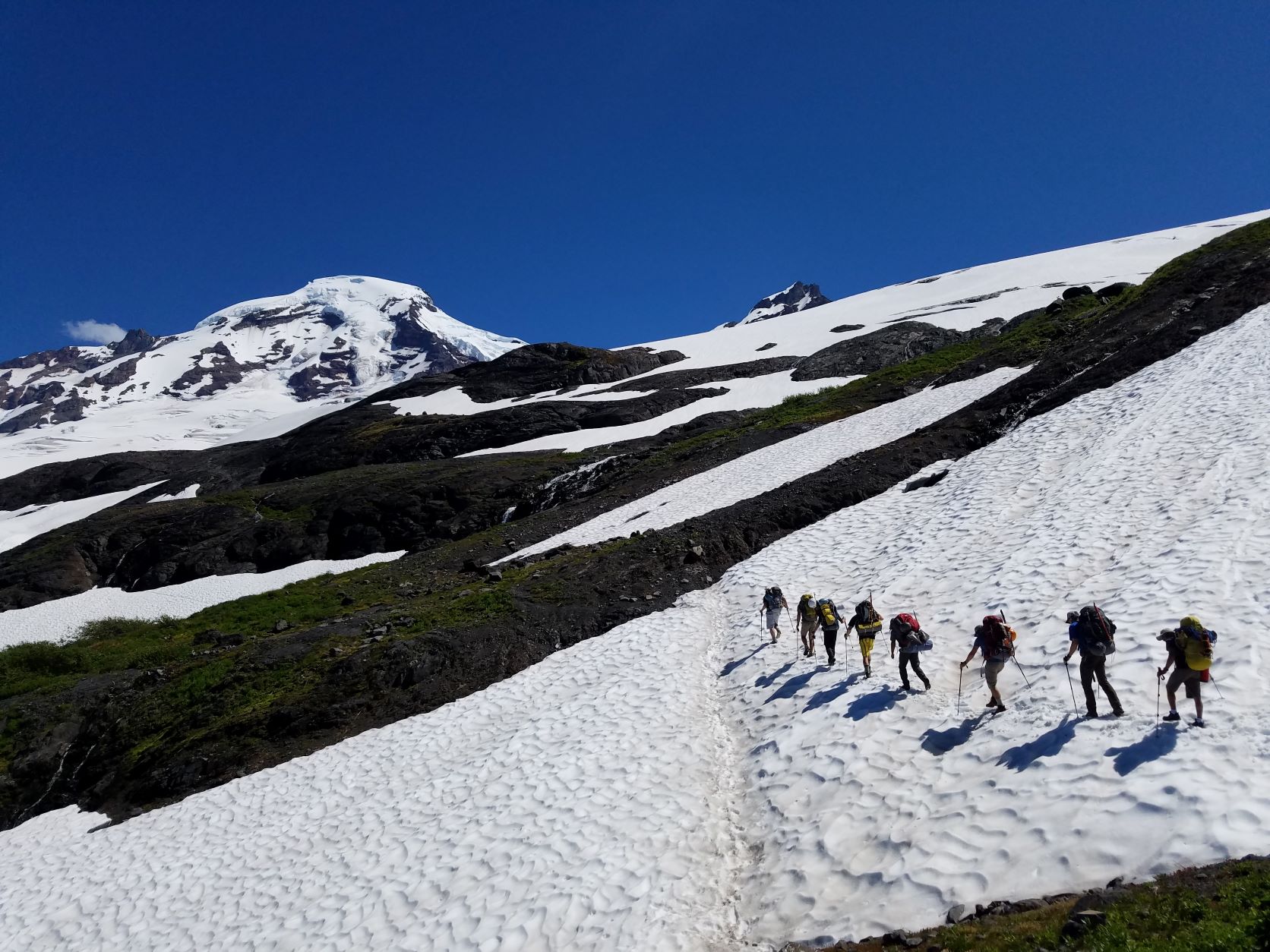 When hiking in a group, games can be a lot of fun and make the more difficult sections go by much more quickly. Photo by Sokheng Hap.

Test the focus of your group with this game. You will need at least four players to effectively play but the more, the better. The first time you play the game, give the basic rules. And then see how high the group can count — don't give them time to figure out a strategy.

Someone starts the game by saying, “One.” From that point on, the only time someone can speak is if they are saying the next number; in this case, “Two.” The game has to restart if more than one person attempts to say the same number or anything besides the correct next number is said. Everyone in the group has to say a number before anyone can say a second number. If anyone is skipped you have to start over.

This game works both while hiking, although it tends to work better when the group isn’t hiking in a long line because it can be hard to hear each other.

See how high your group can count before having to start over!

This game can turn silly very quickly, and allows everyone to participate. You only need two to play, but it can be played with a larger group.

The goal of this game is to have two people say the same word at the same time, without any communication in the group outside of guessing words. Generally, players try to think of words that are related to previous guessed words, but this can (and likely will) go off the rails when both players think in completely different directions.

From here, any person can call “One!” if they have a word, and any person can respond with “Two!” to repeat the process. The game ends — and everyone wins — when both players say the same word.

These types of puzzles can be fun for the entire group, and, as a bonus, if someone already knows the answer because they’ve come across the puzzle before, they can still participate by answering questions. And you only need one other person for them!

A lateral thinking puzzle or yes-no puzzle involves describing a scenario in the most basic of terms, then having others ask you yes-or-no questions to try to figure out what happened; any more complicated questions are rejected.

Here are some puzzles, but there are plenty more if you look for them on your own! Scroll down to the bottom of the page for the answers. Note: If you do a web search for ideas, a lot of these puzzles have scenarios that may be more suitable for older teenagers or adults.

Here’s a bonus camp game; it’s great for a short round during a trailside breather or during dinner.

Everyone chooses a fruit. For example, I choose raspberry and you choose apple. Everyone goes around and says their fruit to start things off.

Then, cover your teeth with your lips, and when it’s your turn, you say your own fruit twice, then hand it off to someone else by saying their fruit.

If you show your teeth, you're eliminated, which can be hard when you're trying not to laugh because everyone is making faces trying not to show their teeth!

If you end up playing any of these games on trail yourself or have fun playing some of your own on your hike, let us know in a trip report!

Answers for the yes-no questions above: