Skip to content
Green Mountain In a state with so many places offering a day's walk to big, peaky views, Green Mountain still makes the short-list of Washington's all-time finest hikes. From woods to meadows to panoramic views and even a historic lookout, it just doesn't get much better than this. https://www.wta.org/go-hiking/hikes/green-mountain https://www.wta.org/site_images/hikes/green-mt-lookout-trail-russ.jpg/@@download/image/green-mt-lookout-trail-russ.jpg

FR-26 (Suiattle River Road) is closed due to wildfires.

In a state with so many places offering a day's walk to big, peaky views, Green Mountain still makes the short-list of Washington's all-time finest hikes. From woods to meadows to panoramic views and even a historic lookout, it just doesn't get much better than this. Continue reading


(32 votes) Log in to rate
Saved to
My Backpack

452 trip reports for this trail

In a state with so many places offering a day's walk to big, peaky views, Green Mountain still makes the short-list of Washington's all-time finest hikes. From woods to meadows to panoramic views and even a historic lookout, it just doesn't get much better than this.

There are a few organizations and individuals to be grateful for, as otherwise there'd be no hike to talk about here. Due to flooding, the Suiattle River Road -- which provides access for Green Mountain -- took a big hit in 2003 and a final blow in 2006 when a landslide demolished it, cutting off motorized access to all hikes in the area. It took years of advocacy and the tireless work of Washington Trails Association, the Forest Service, the Swinomish Tribe, and various local governments to finally get the road rebuilt and reopened in 2014.

And then there's the lookout on top, originally built in 1933 and used for years to house seasonal fire lookouts. In 1987 it was added to the National Register of Historic Places, and in 2010, shortly after being rebuilt, it was threatened with dismantling when an environmental group sued the forest service for allowing the use of helicopters in its restoration.

After years of advocacy, legal battle, and a court ruling to have it removed, the Green Mountain Lookout was finally saved and protected by an act of Congress (motivated by unified championing from Washington State senators and representatives) and the signature of President Obama.

In the meantime, neither lack of road access, trail maintenance, nor legal wranglings deterred the members of the Friends of Green Mountain Lookout, who mountain-biked more than 12 miles up forest roads, waded through the brushy meadows, and carried 50-pound packs full of tools and supplies to preserve and maintain the lookout. Give them all a thought as you drive up the rebuilt forest roads, walk the well maintained trail, and admire the perfect lookout crowning this peak.

Now it's time to go see what all that hard work bestowed! Pack a few layers as it can be hot on the exposed upper slopes and pretty darn crisp when it gets breezy -- you're going to 6500 feet. Throw in more water than you think you'll need for yourself and your canine accomplice (if applicable) as there's little water access once above the trees.

And if you have the kind of life that's hard to explain to family over Thanksgiving but allows you to hike on a weekday, you'd be wise to do so. All the grandeur that is Green Mountain is popular with the synthetically clad masses of the great Northwest who know a good thing when they see it.

The first mile and a half or so winds through forest with the occasional Douglas-fir big enough to warrant a second look. Emerging from the woods, it's hard to know what to admire first, the big views of pointy White Chuck, hulking Glacier Peak behind you, or the lush meadows ahead and above which are gorgeous in every season.

In the spring, there's no doubt why they called it Green Mountain (though the peak here is not Green Mountain but its shoulder); in the summer there's a flower show with an extensive guest list (orange Glacier Lilies and red and yellow Columbine dip their heads, scarlet Paintbrush, Blue Bells, purple Penstemon, and fields of white Valerian) as well as plenty of biting bugs to pollinate them all.

In the fall, the colors are so vivid they hardly seem real. But there they are, glowing red and orange around every corner in the autumn sun. If you're the type that likes that sort of thing, you're going to want a fully charged camera battery. Or two.

Beautiful as it is, this trail is all business. Switchbacking steadily for another mile or so brings you to an expanse of trailside blueberry bushes we call The Opium Fields for their power to cause hikers to forget all about the views ahead, the setting sun, and everything else besides the abundance of blue, tangy goodness. In the fall, it's hard to believe this swath of glowing red leaves paired with sweeping views is mere miles from the car.

Working your way around this shoulder peak, you'll drop down 100 feet (this will be far more noteworthy on the way back) through fields of heather, which bloom purple in the summer, to a couple of small ponds and established campsites at around 5200 feet. Look up to see Green Mountain ahead of you, with the lookout now visible, 1300 feet and a mile of walking above. It's hard work from here, and the trail is steep, but the view of Cascade peaks improves with every switchback until it crescendos at the summit ridge where peaks to the north and east become visible. Marmots might whistle at you from here, and the occasional Ptarmigan mama might put on a show to distract you from her fuzzy-feathered offspring in the tall grass.

From the summit ridge, look for a big, flat-topped rock below you to the left, especially if you hear a high pitched whistle. More than a few hikers have reports and photos of the marmot who favors that spot and has become referred to as the Greeter of Green Mountain.

In the late fall and early winter, snow is likely present toward the top, and you will want traction devices (preferably something like micro-spikes) for the steep upper slopes. Use caution here as the drop-off in both directions is worthy of respect in slippery conditions. This is not a suitable destination after significant snowfall; all those treeless, gorgeous meadows are otherwise known as avalanche slopes.

Once at the lookout, the views are world class. Mount Baker is visible to the north, Buckindy, the Ptarmigan Traverse group, and Dome Peak rise above the Downey Creek valley to the east, with the top of pointy Mount Sinister peeking out behind Dome. Glacier Peak dominates the southern skyline just west of the Suiattle River valley, along with the usual Mountain Loop suspects: Mount Pugh, Sloan Peak, Del Campo, Three Fingers, White Chuck and White Horse.

WTA Pro Tip: Traveling to 6500 feet on mostly exposed slopes warrants more attention to packing than many other similarly proportioned dayhikes might. Bring lots of water, especially in the summer (all the more if traveling with a dog), wear base layers you can strip down to if it's hot but pack something windproof and something warm and puffy if it's cold up high. In the summer you will want bug spray, and on any sunny day, sunscreen and lip balm should be on hand. Don't forget your dog's nose and upright ears, though check the ingredients: zinc oxide is toxic to dogs. Leave time for berry picking if they're in season and more for photo taking. Bring a headlamp.

For a unique place to eat on the way home, consider Rhodes River Ranch in Oso just a few minutes off of Highway 530, where they range from the usual bar foods to the highbrow, have good salads and real-deal meat and potatoes (the meatloaf is awesome), as well as beer, wine, and desserts in a restaurant situated over a working, indoor horse arena.

FR-26 (Suiattle River Road) is closed due to wildfires. 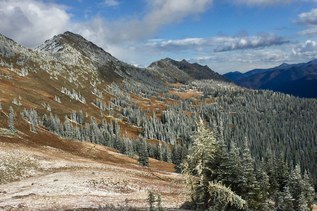