Skip to content
Shi Shi Beach and Point of the Arches Shi Shi Beach never disappoints. It's been many years since I had been here, but the majesty of Point of Arches remains as stunning as ever and the sound of the surf just as soothing. This was our ... https://www.wta.org/go-hiking/trip-reports/trip_report.2012-09-03.1674188125 https://www.wta.org/site_images/trip-reports/2012/shi-shi-sunset.jpg/@@download/image/Shi Shi - sunset.jpg 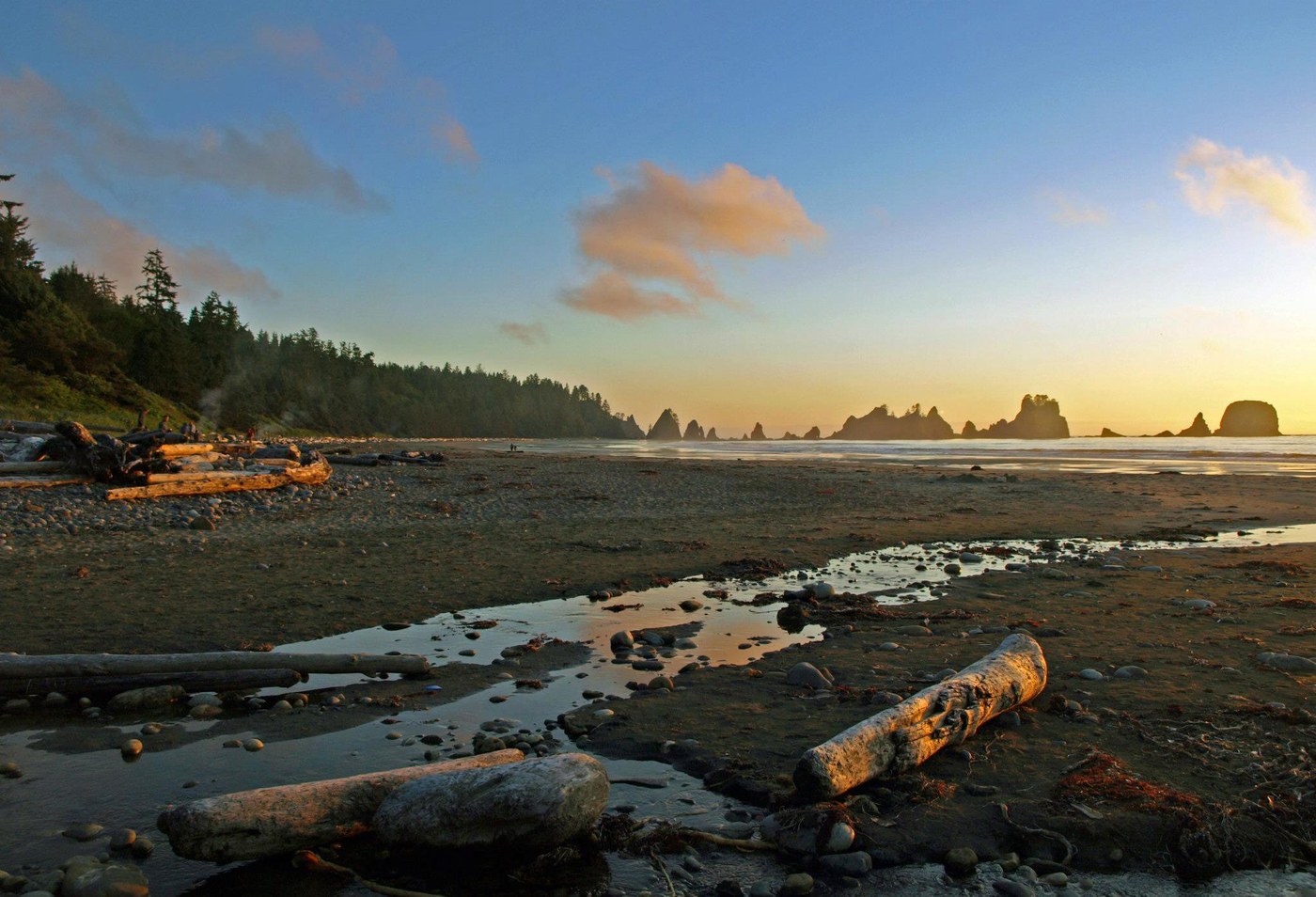 these trails in our Hiking Guide
Shi Shi Beach never disappoints. It's been many years since I had been here, but the majesty of Point of Arches remains as stunning as ever and the sound of the surf just as soothing. This was our first backpacking trip as a family - and we loved it! Our kids, 3 1/2 and nearly 7, carried their clothes and water; my husband and I carried every thing else. These were very heavy packs. Fortunately, the trail is flat and short. We hit the beach just as the sun came out and made our way toward the campsites near Petroleum Creek, about two-thirds the way down the beach. The kids started to whine just as we came to a sweet spot we'd stayed in before - a two-tiered campsite up in the woods about a quarter mile from the creek. Not knowing whether the more developed sites further along were full, we took it. The second day we took a morning hike to Point of Arches. With low tide at 6:30 am, we didn't hit it perfectly, but were able to poke around some of the closer in tidepools before the tide chased us away. The big campsite on the south side of the creek was open, so the kids played on its "playground" hammock and rope swing. We made mobiles out of crab legs and set up an obstacle course of floats. Good times! Being the Friday before Labor Day we also watched the stream of backpackers arriving for the long weekend. On Thursday there were about 5 parties on the beach; Friday I considered it full up, with a tent about every 150 yards. And Saturday, as we left, the hordes truly descended. I estimate that the beach population will have exceeded 200 for the weekend. Way too crowded, and we were happy to be walking the other direction. All in all, it was a great first backpacking destination for kids. Our preschooler was by far the youngest, but she did great. There's so much for kids to do on the beach and plenty for the adults to enjoy too. We'll be back! For those who haven't been to Shi Shi in awhile or ever: * Permits - backpackers will need two: the Makah Recreation Use Pass ($10 annual) and an Olympic National Park backcountry pass, available in Port Angeles or Forks. There were also a few envelopes atop the bluff that descends to the beach. * The trailhead has moved about a quarter mile closer to the fish hatchery, with a privy and room for about 15 cars for day hikers. * Overnighters park about .6 mile back at a private home. It's $10 per day, cash, for every day you will be parked there. There's also another place about 1.5 miles from the trailhead that is $10 per night, but it's gate was oddly closed on Labor Day week * The first mile of trail has gotten a nice make-over, winding first through a brushy clearcut and then into forest, with boardwalks and bridges that our kids enjoyed. * The second mile continues to be plagued with mud, as bad as ever. * The trail from the bluff to the beach is heavily eroded, worse than I remember. * Olympic National Park requires all food be packed in hard-sided bear containers. It was a challenge to fit three days of food for four people into one. * Know the tides. During seasonal high tide periods greater than 9 feet or so, much of the beach camping will not be available. To round Point of Arches, tides need to be lower than 4 feet. * Finally, note that all of the roads in the northern part of the Peninsula are being repaved right now. The many long waits added a good hour to the drive. It was faster to take Hwy 101 to Sappho than to take 112 from Port Angeles, but still slow. Neah Bay is a long way from everywhere.
The kids celebrate hitting the beach with a driftwood climb. 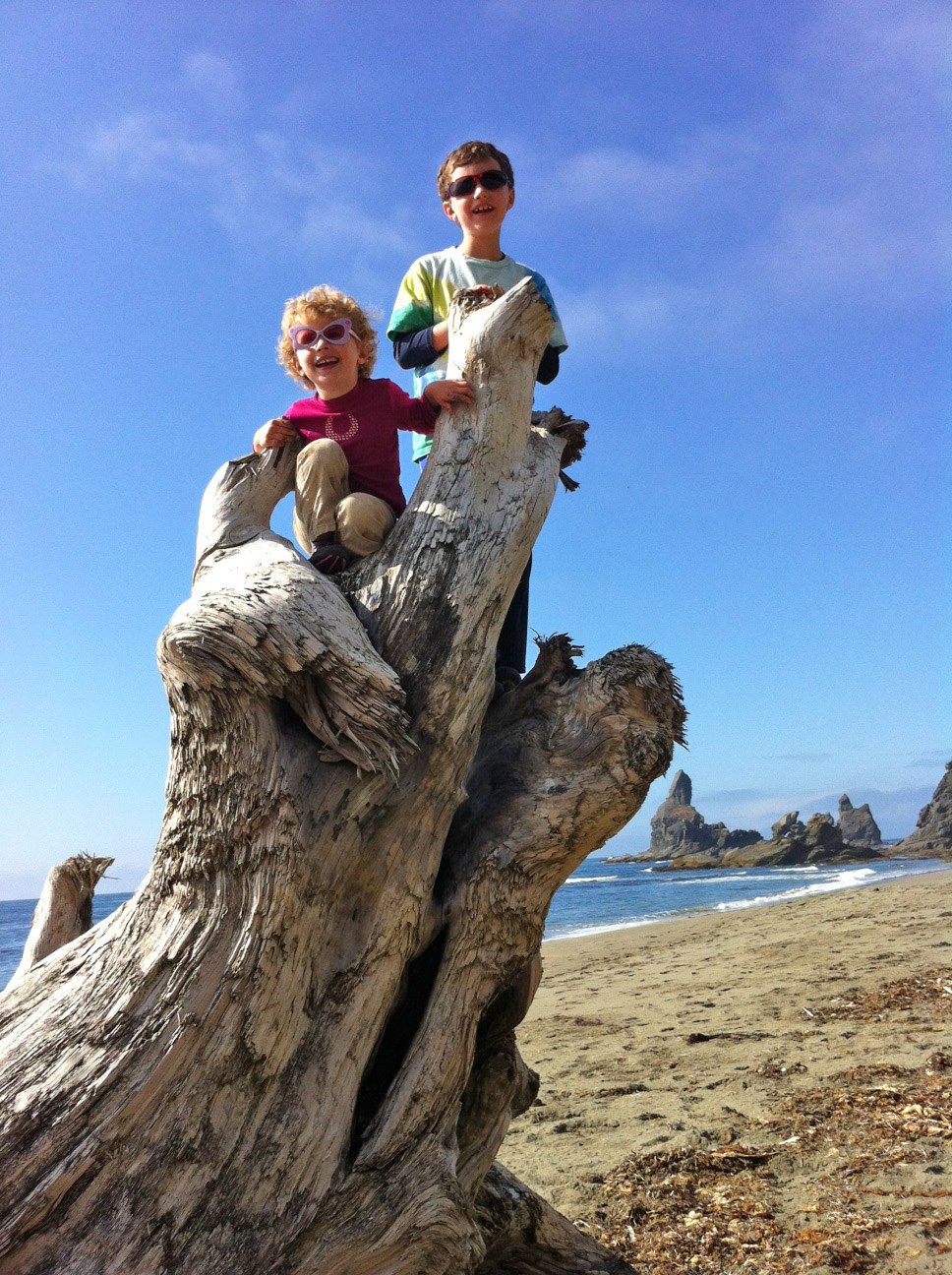 Bald eagle right above our campsite. We also saw deer on the beach, coyote tracks in the sand and a whale cruising just beyond where the surf was breaking. 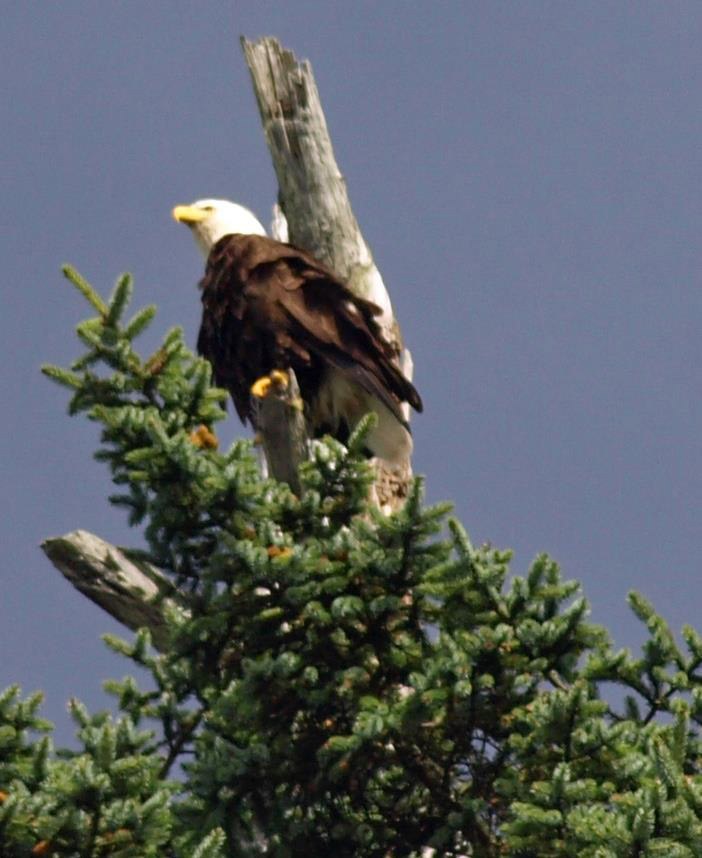 Tidepooling at Point of Arches. 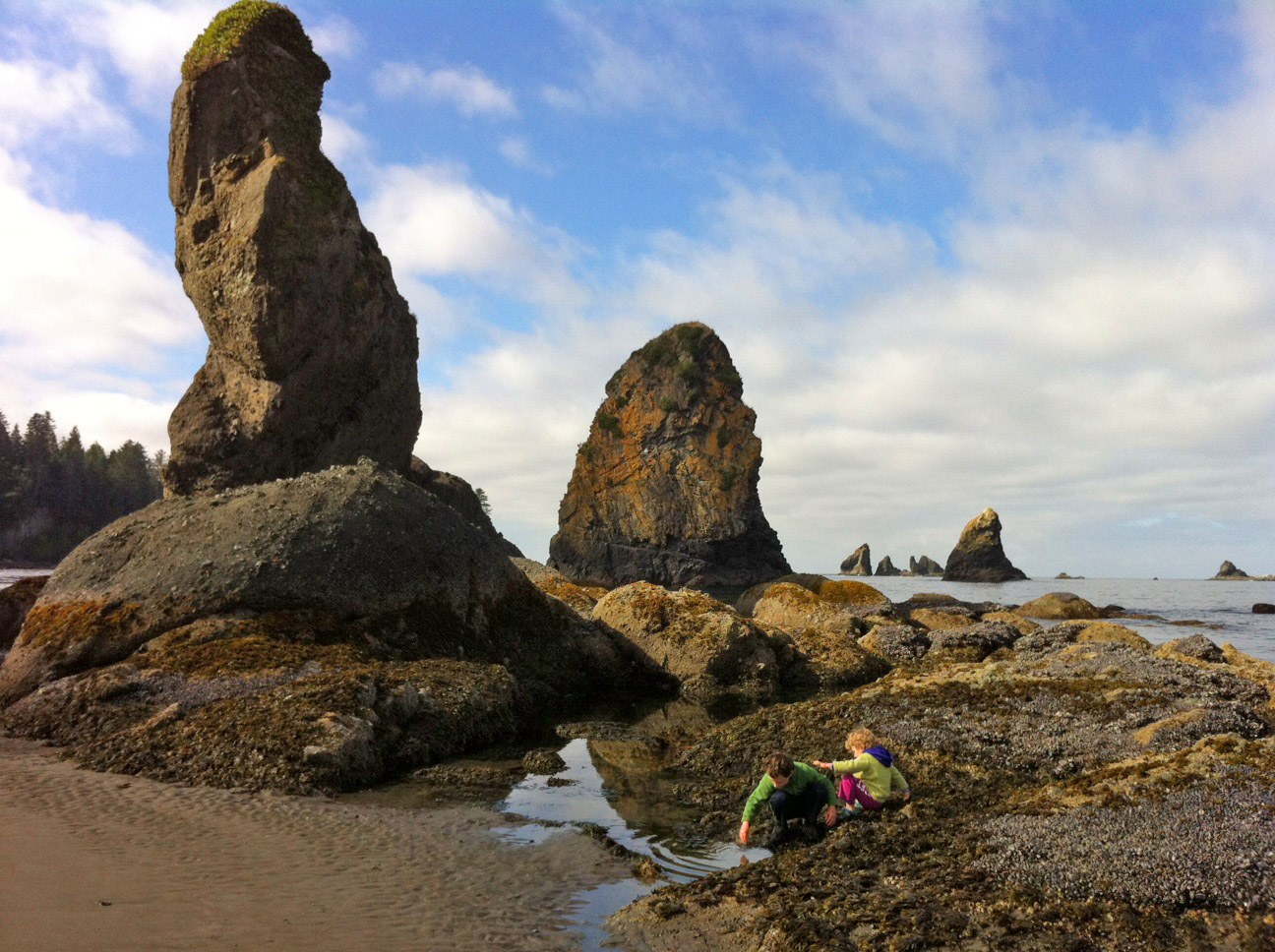