A Path to Healing
Christina Hickman celebrates after a hike to Hidden Lake Lookout. Photo by Ally Schmaling Photography.

A Path to Healing

OCD, anxiety and eating disorders once controlled me. Discovering hiking showed me a way back to myself | by Christina Hickman

I don’t remember a time when I wasn’t anxious and obsessive. Even as a child, I had quirks, like locking and unlocking the front door seven times before bed. When a boy threw up repeatedly in my third-grade classroom, I was so upset that I, a perfect-attendance stickler, missed 16 days in one quarter. In eighth grade, I developed a stomachache and then barely ate for two weeks out of fear I would be sick. I’d later learn I had emetophobia—the fear of vomit. At 17, I was having 12-hour-long panic attacks, leading to a diagnosis of obsessive compulsive disorder and generalized anxiety disorder. By the time I went to college, I was taking 13 pills a day. The prescriptions brought on weight gain—30 extra pounds on my 5-foot, 1-inch frame in less than a year.

The prolonged panic attacks did subside with the medication but they left in their place an unfeeling shell of a human. I decided I hated being controlled by those meds more than I hated being out of control of my mind and stopped taking them—all at once. After a harrowing episode of hallucinations, my doctor and I settled on weaning me off of all but one medication.

During college, I channelled my anxiety into average college-kid concerns: grades, making friends, meeting a partner and figuring out what to do with my life. I had less time and brain space to dwell on my obsessive thoughts. For a while I felt, well, normal. 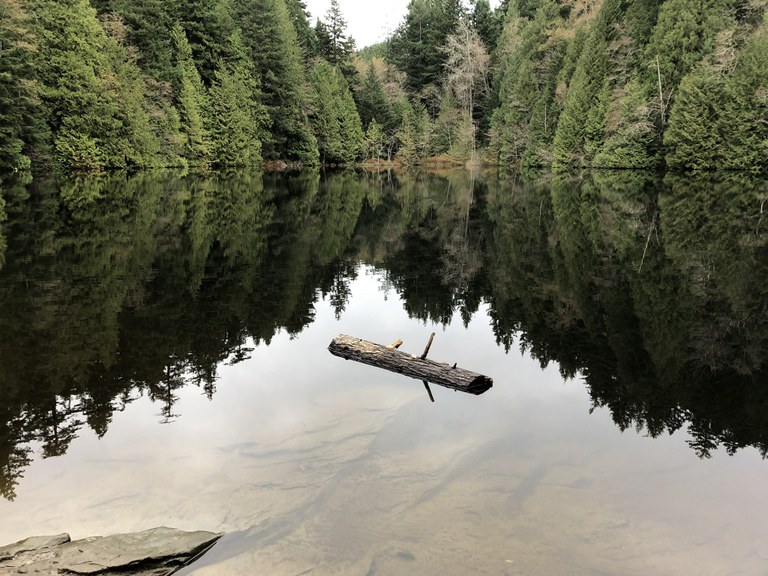 A winter trip to fragrance lake. Photo by Christina Hickman.

But my brain seems to need to cling onto at least one obsession. For much of my life, it’s been the emetophobia. Phobias commonly coincide with pre-existing OCD. The two feed off each other. I ended up avoiding many things—parties, bars, roller coasters, airplanes and sometimes even food—anything where I or someone else might get sick. This practice of avoidance allowed me to escape the more potentially terrifying experiences I could face.

Avoidance only gets you so far, though. Several years later, a food borne illness resulted in the start of an eating disorder. Consumed by the thought of getting sick again, I ate very little and lost weight. The incident transformed unassuming parts of daily life like colors, numbers, sequences of events, clothing and specific foods into unexpected triggers, causing continual episodes of avoidance, fear, isolation and constant anxiety for several years. When I started to eat more normally, I gained some weight back; this reminded me of those 13 pills a day and that uncontrolled weight gain. Soon calorie counting and over-exercising became my way of having control over something in my life.

My eating disorder took root as I transitioned into my first full-time job and started applying to master’s programs. After getting accepted to graduate school, I moved to Seattle from Massachusetts in the summer of 2014 with my now-husband. On our road trip out, we passed through national parks and new landscapes, and we went on our first real hikes. After settling in Washington, we started hiking regularly. The alpine lakes, volcanoes, summits, old-growth and wildflowers were new and exciting. I loved them and was ravenous for new adventures.

I was silently struggling, though. The move was lonely. Dan started working full time, and in the few months before school, I was by myself nearly every day. Money was nonexistent. The moving company lost all of our belongings (which they eventually found). I was trying to navigate a new city. My grad program started. Everything overwhelmed me. Then five months after I moved here, my grandmother unexpectedly passed away. I was an only grandchild. Her home was my second home growing up, and she’d lived with my family for the past 14 years. I often describe her as a soulmate.

I was lost. I sunk deeper into my eating disorder and food obsessions, desperately clinging to something I could control.

During one of my daily weigh-ins shortly after my grandmother’s death, I saw something on the scale that shocked me: a number I’d last weighed when I was 10 years old. For the first time, the low number didn’t make me proud; I felt disgusted. I thought of my grandmother. How would she have felt to hug my skeletal frame? It was a small turning point. I slowly started eating more, adding a slice of bread here, a bit of peanut butter there. Serendipitously, a knee and hip injury forced me to run less, so I began to hike more.

I didn’t realize, as I struggled on the trails, that my body was undernourished—my eating-disordered mind didn’t think that hiking was exercise; therefore, I rarely ate during or after hiking. Despite feeling weak and being sore for days after, I kept at it for the views.

Up to that point, most of my hikes had been with my husband. But that spring, I completed my first solo hike. Although I was slow and sweaty and contemplated quitting, my determination pushed me to the top of Mount Si. I had someone take some triumphant photos of me. Later that night, I flushed with pride when I told my friends. It felt freeing to have this new part to my identity.

By this time, I was well into my grad program and often overloaded with work. I started hiking alone to mull over my assignments. The steps became meditative; my brain could only focus on putting one foot in front of the other. I thought less about my eating disorder, less about the things that stressed me out. I thought less, period.

I began to hike for the calmness that radiated into me with every step. To not think—what a foreign concept. On trail, I could focus on the moment and my current feelings. Not even years of yoga or running had done that for me. Hiking became a moving meditation. The trails became an escape. Instead of staying cooped up in my tiny apartment, I was exploring. Breathing in fresh mountain air. Using my body in a way that wasn’t punishment.

At first, I only hiked on nice sunny days. But soon, in the doldrums of Pacific Northwest winters, I found myself yearning to be outside. So I began hiking on cloudy and rainy days. I hiked the same trails over and over. I found solace in those familiar trails, in my camaraderie with the ferns and old growth. I learned to recognize the raven calls and western red cedars. I learned about Leave No Trace and the Ten Essentials. I wrote trip reports and joined an all-women outdoors group. Even on days that I couldn’t get out of town, I hiked in city parks. The trees comforted me like old friends, listening to my complaints and my crying. I continued to push my limits with more miles and elevation gain. Food was the fuel that pushed me farther and higher, no longer my mortal enemy that I sought to destroy. There was room for both of us on the trail. 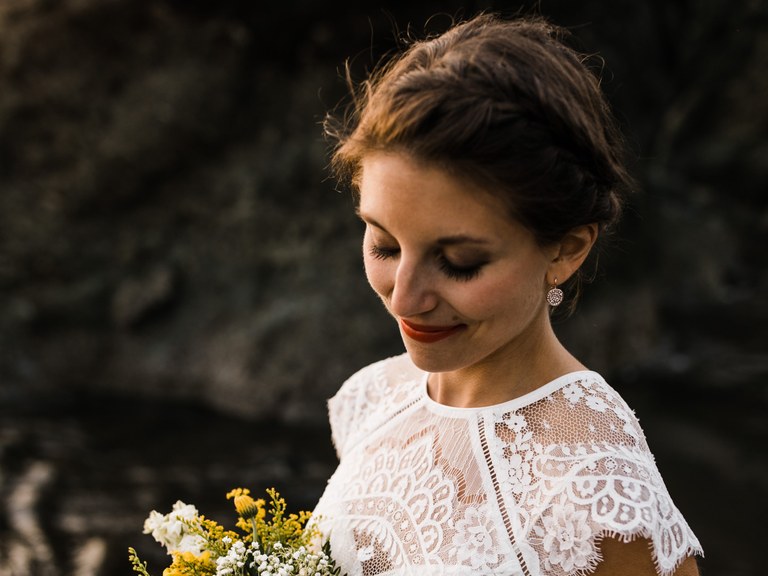 Christina and her husband found such joy in the natural world in Washington, they chose to get married in Olympic National Park. Photo by Hearnes Adventure Photography.

My first full year on the trails, I hiked 350 miles. In 2016, I set a goal of 500 miles and completed 650. And this past year, I hit 808 miles and just over 250,000 feet of elevation gained. When I look in the mirror, I can choose to see my thighs as thunderous or as what propelled me hundreds of miles and up to mountain peaks. How could I hate them? My body sometimes failed and usually struggled. But it was mine, only mine, the only thing getting me from A to B, from base to summit. Hiking had transformed my body into an amazing vessel of accomplishment and pride.

While my physical health has drastically improved, I still struggle with the mental aspects of an eating disorder. My anxiety certainly hasn’t vanished. I expect it to take time; I never envisioned my journey to health to be a flat, straight path. But without the woods, I don’t know where I’d be. These days, I’m on half of the lowest possible dosage of my (single) medication. I don’t have (as many) prolonged bouts of panic-induced insomnia anymore. I can (usually) ride a bus or plane without a meltdown. And when I do experience terrifying moments and times of helplessness and complete fear, I handle them better. I use breathing techniques. I refocus my energy. My baseline overall is a lower stress point, so it’s harder to get to my worst. And now I know where to go to decompress. I have an outlet.

I think the woods made me into a better person. Or at least a calmer, more sane person. And I know they are always there when I need them, never judging and always cheering me on. Once, alone in the woods, a feeling struck me that can only be described as belonging; for that moment I was exactly where I was meant to be. I smiled and exhaled, my thoughts dissipating into the mountain and replaced with a feeling of comfort. I was alone with myself, and I was everything that I needed.