Bravespace Film Reclaims the Outdoors for Women of Color
link

Bravespace Film Reclaims the Outdoors for Women of Color

A new film puts Black, Indigenous and women of color in front of and behind the camera to create community and connection. | By Jessi Loerch

Hiking, climbing, swimming, snowshoeing, snowboarding, paddleboarding — there are so many ways to spend time in nature. And there’s an equally beautiful diversity of people who find peace and inspiration in being outdoors.

A new film is highlighting some of those people in a way that’s counter to the typical narrative of outdoor adventure films.

“Expedition Reclamation,” which was filmed in Washington, highlights the stories of Black, Indigenous and Women of Color. It features women from across the state who are sharing their stories to help reclaim what it means to be “outdoorsy.”

The project began with Chelsea Murphy’s work to create community and create representation for people of color in the outdoors. Erin Joy Nash, a filmmaker in Leavenworth, saw what she’d been doing and reached out with the idea of making a film.

Erin and Chelsea wanted “Expedition Reclamation” to be even more than a film. It’s part of a broader project called Brave Space, which aims to build community. Chelsea says that, from the beginning, connection and community were at the heart of everything they did.

“A large part of our intention for this film project was to change the narrative of how films are made,” Chelsea said. “It was ultra-collaborative, and all women led. We’ve seen hierarchy in past experiences on films, but we came into it as a team. Every voice truly matters. It’s so collaborative, it’s hard to say what one person’s role is.”

The film, which is in production, puts women of color in front of and behind the camera. Erin, Chelsea and the film’s other creators want to reclaim a feeling of belonging in the outdoors for Black, Indigenous, and Women of Color. The film highlights joy, resilience and the transformative nature of a relationship with outdoor recreation. 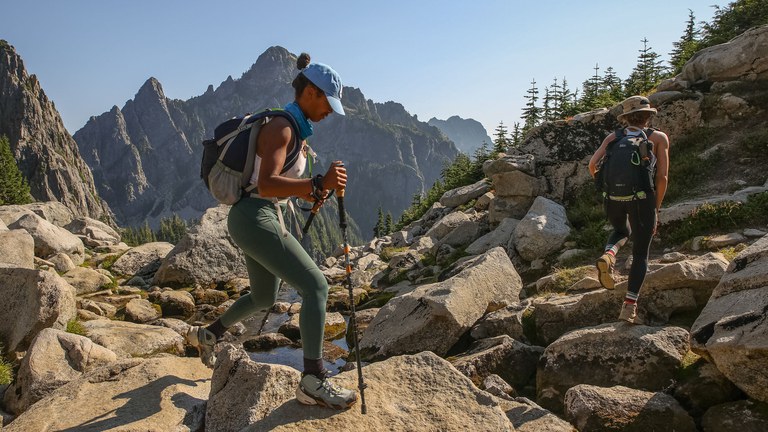 Chelsea and Michelle on the hike up. Photo by Erin Joy Nash.

For Chelsea, one of the highlights of creating the film was a camping trip to the Mountain Loop Highway. It was the first time she’d gone camping without her family.

“I brought my single-person tent, and I got to sleep without little hands and feet in my back,” she said. “It was weird and great.”

Because of the pandemic, the camping trip was the first time the women had been able to meet as a group.

“It was just us Brown girls around the campfire; it was a magical thing. No one was talking over anyone. We were all listening. All talking. It was a very cool reciprocal conversation that was going on — giving and taking,” she said. “I’ve never had such a beautiful experience around the campfire.”

Karen Francis-McWhite is a writer on the film and also provided the voice-over work for the film trailer. She was struck by how different this film was. She had friends in the film industry, and she knew that shoots were often hierarchical and that money and the market were the focus. She also had grown up watching Warren Miller films because she loved snow sports, especially downhill skiing. She noticed, however, that outdoor recreation films didn’t often prioritize a community spirit. That wasn’t true of “Expedition Reclamation.”

“It was easy to forget that we were making a film that would be released into the world,” she said. “It felt like we were building community. And the film was just one of the ways that we did it.”

After recording the voice-over for the trailer, which includes the line “brown fingers braiding raven hair,” Karen realized that the women of the film were braiding their voices together. They were telling a story of inclusion, without first having to tell a story of exclusion.

“I want to see more examples of Black women and Black girls simply being, and not having to predicate it or asterisk it with violence or trauma or exclusion,” Karen said. “I don’t know of any other documentaries that attempt to combine the conventions of outdoor recreation films with the celebration of diversity and the feminine in natural spaces.”

She hopes the film encourages more people, especially BIPOC women and girls, to claim their right to be in natural spaces and outdoor recreation — in whatever way they want to show up.

“I want that film to be part of the process of normalizing the rainbow of humanity in natural spaces. And in respecting those natural spaces and treating them with the reverence they deserve,” she said.

Nikky Martin is a character in the film and wrote the music for the film’s trailer. She also wants to remind the world that everyone belongs in the outdoors — and that there are many ways to enjoy being outside.

Nikky is relatively new to outdoor recreation. When she arrived in the Northwest from Miami a few years ago, she wanted to explore outside, but found it daunting to get started. But during the pandemic, Nikky realized she needed to be outside. Due to some physical issues, hiking much wasn’t an option. But she could camp, so she packed up her tent and her dog and went outside. She sometimes felt she didn’t fit in, or felt judgment for her only tent, which was so much bigger than most campers’. But she also found joy in being in nature.

“I think we should be conscious of the way we are being in nature, and remember that there’s not a right way to be,” she said.

For some, being outside may mean a long hike. It may also mean spending all day near a river. Nikky uses her time outside to connect to her spirituality — it’s a big part of why she likes to be in nature. And she appreciated that the other people involved in the film immediately understood that.

“This film is so important. Representation is so important,” she said. “It is daunting to go out in predominately White spaces as a Brown woman. With representation, some other little girl is going to see this and have so much more courage.”

“When we only have one type of story being told all the time, we miss an entire, really colorful palette of different cultures and different people,” said Kaja Ralston, a character in the film. “That’s what makes this film so beautiful. We are allowed to share those stories, some of us for the first time.”

Kaja joined the film at a time that was personally very challenging. It was right after a traumatic pregnancy loss. She wasn’t sure if she was ready.

“Saying ‘yes’ was the most empowering thing for me,” she said.

Since joining the film, Kaja has found new ways to care for herself. She changed jobs. And working as a photographer on the film has encouraged her to pursue that passion, as well as others.

“I want my future kids to see that I said yes to something,” she said. “I want to continue to grow through this community. I really love how the film has become a platform to step into something new.”

Ina Waring-Enriquez also found that the experience of the film opened up new adventures for her. Ina, who is a rock climber, was nervous to be filmed while climbing. She picked a route that she was excited about and worked hard. Just the climb itself turned out to be a huge accomplishment. It was one of the hardest climbs she’d ever led.

When it was time to be on camera, though, the rest of the crew made her feel comfortable right away.

“We talked about what it means to be a woman of color recreating in the outdoors,” she said. “I felt like I was being seen. I felt like I had folks to empathize with. It felt really powerful being out there in that space, in a rock climbing setting, which is usually just me and a lot of white dudes.”

Later she went out snowboarding with Erin (the co-producer of the film) and she loved the space to be herself. 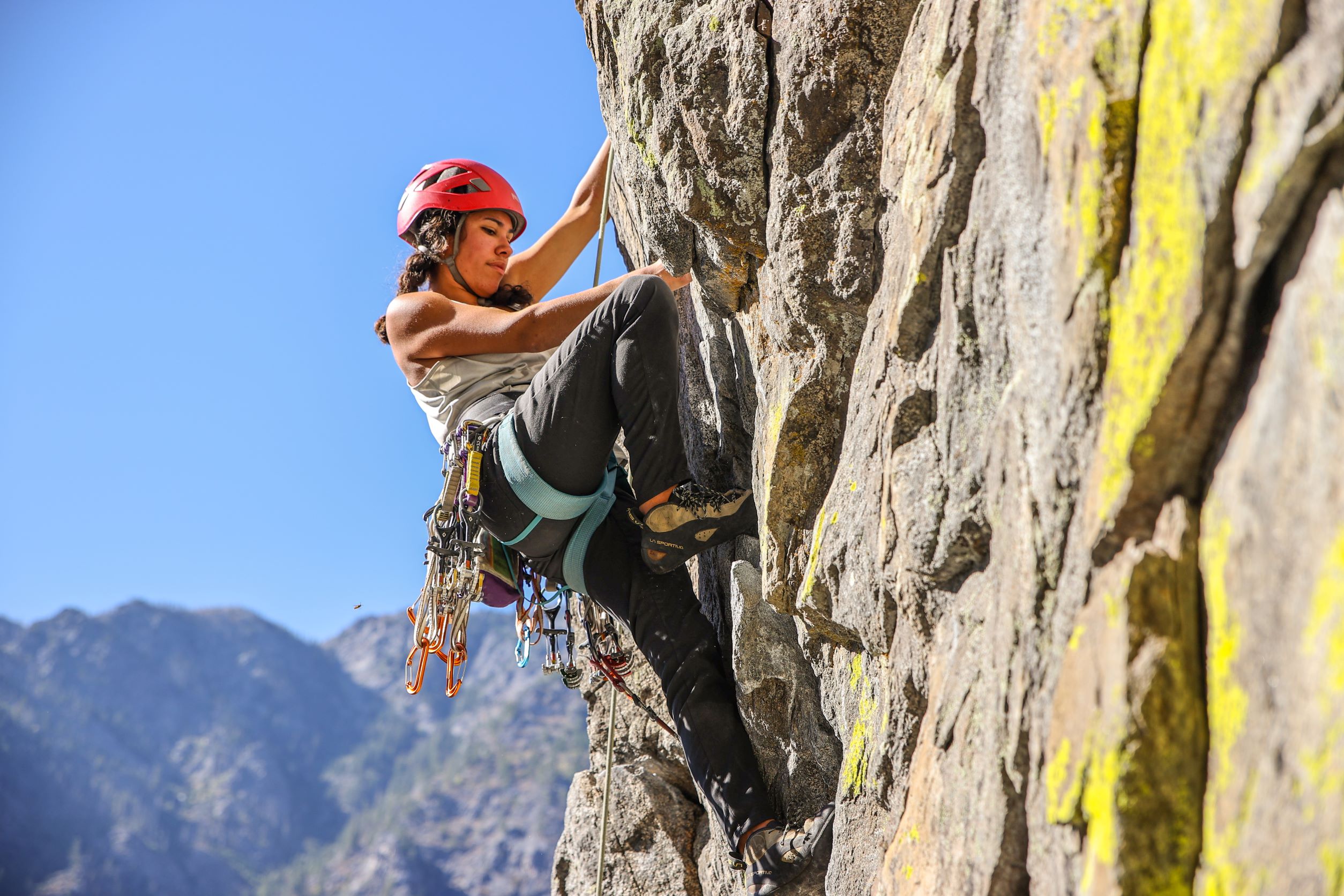 “Sometimes when I’m recreating in the outdoors — and I’ve especially felt this with snowboarding — I’m the only woman there. I’m the only person of color there. And I sometimes feel I have something to prove. … With these spaces, with these women, I didn’t feel like I had to be any particular way. I was just able to come as I am. I want to foster that for other people too.”

Ina would like to do more to help welcome more people into the outdoor community. She’s excited to see opportunities come from the film. She’s already been asked to teach an avalanche class for the Northwest Avalanche Center, thanks in part to connections made from the film. She hopes that, as an instructor, she can help people — especially people of color — find joy outside.

Chelsea wants more women of color, and all people of color, to find the sense of comfort and ease that the members of the film crew felt in the outdoors. And to make that happen, she’s hoping to get the film shown in a variety of communities.

“I want it shown where representation is needed,” she said. “I want to show it in Leavenworth; it’s needed here. I also want it shown in communities where kids are not getting the opportunity to get outdoors because they may not feel comfortable.”

Even just in how and where they decide to show the film, Chelsea hopes to build connections.

“I have really high hopes of strengthening a lot of networking and community building with other groups,” she said. “I ultimately want to use this film to propel us into more important conversations about the outdoors.”

Learn more about the film at bravespaceproject.org.

This article originally appeared in the Fall 2021 issue of Washington Trails Magazine. Support trails as a member of WTA to get your one-year subscription to the magazine.