Six years ago, a few weeks after my husband’s retirement, a hiking suggestion in the Kitsap Sun caught my eye. We were in our late 60s, hadn’t been on a trail for more than a decade and had never been serious hikers. We weren’t sure how we’d do. But we headed out for an early spring hike up the Four Stream Trail in the North Fork Skokomish Valley.

As it happened, we did quite well. Beyond that, we loved it. Three days later, we were in the Dosewallips Valley, and in 4 more, the Lower Big Quilcene. Soon we were hooked, and by the end of the year, we’d walked more than 500 miles on trail. Now, nearly 500 hikes later, we’ve passed the 3,000-mile mark, all but a few of those miles in our nearby and beloved Olympic Mountains. We hike easy trails and hard trails. Some of our favorites have included Tubal Cain Mine, Royal Lake, Tunnel Creek to 5050, Deer Park and Obstruction Point, most memorably on full-moon nights using only the light of the moon.

While all of this has been wonderful, adding richness and a lovely rhythm to our retired life, a particular aspect of it has an element of the miraculous.

In 2014, when our hiking began, I had known for 15 years that I was a survivor of father-daughter incest and had gradually become aware that it spanned my childhood and some years beyond. Traumatic dissociation — a brain miracle, as I call it — had allowed me to have no knowledge or even an inkling of the abuse until I fell apart after the birth of my son and only child when I was 41. It wasn’t until he was 10 and I had been in psychotherapy for half those years that I began to know what the emotional crash and ensuing struggle were about.

My time in therapy didn’t end then but instead became more frequent and intense. More than half a dozen well-trained, skilled and compassionate people have now worked with me around the aftereffects of my trauma history. Certainly, I have been helped by their efforts, and my therapy continues. But nothing in the psychotherapeutic realm, including antidepressant medications, has become something I can count on to help restore a sense of equilibrium and peace when I’m in the grip of frightening and sometimes overwhelming feelings. In a stroke of pure serendipity, it is hiking that has given me this gift.

As our trail miles have grown, I’ve become aware of a pattern. Even on the worst days, when feelings of depression, disconnection, loneliness and fear swamp me, I almost always feel better as a hike progresses, and this improvement commonly persists afterward. Once home, I often feel markedly different from the person who headed out earlier in the day, a factor of inestimable value and something largely unique to hiking.

I’ve given this considerable thought, and while I can’t be certain what the determinants are, two in particular have emerged. First, I often set ambitious goals for a hike, goals that I, along with my husband, rarely fail to accomplish. Perhaps the best example of this is what we’ve come to call our “Big Hike,” a one-way trip we first did in 2015 and have repeated every summer but one. It involves walking from the Tubal Cain Mine trailhead, up over Buckhorn Pass and on to Marmot Pass, and from there down through the Dungeness Valley to the Upper Dungeness trailhead — a total of 17 miles. I’ve come to believe that this hike especially, though in the company of countless others, is both model and metaphor for my overarching journey, bearing the message that I can keep going, can continue moving forward, even in the hardest of times. 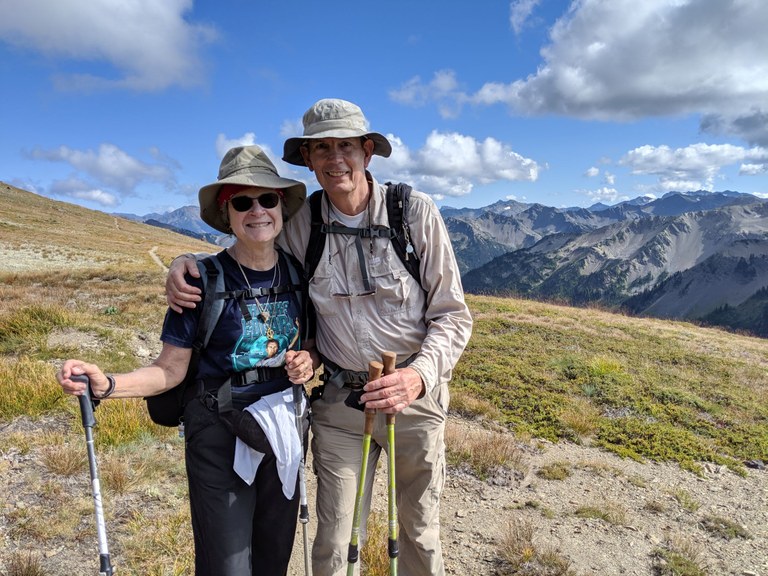 Pam McPeek has hiked more than 3,000 miles since she and her husband, Bill, started hiking regularly. Most of those hikes have been in the Olympics, including to Lena Lake and Obstruction Point (above). Photos courtesy Pam McPeek.

The second factor, and the more obvious and likely more profound, is the effect of being outdoors, unbounded, in the wild and glorious natural world. It is unfathomably complex but at the same time simple, asking nothing of me but to be present. I relish this simplicity, the lack of anything like pretense or phoniness or betrayal. It is what it is: honest, basic — birth and life and death — and soul-stirring beauty that touches me, often moves me to tears and, yes, brings me a sense of peace.

I am not healed. That may never fully come. The abuse, I believe, was too long-lasting, the damage too deep. It became part of who I am. But I am healing, with the matchless, unwavering, unconditional and selfless love of my husband; with the steadfast help of a therapist of now 19 years who continues to believe in me; and with the miracle of hiking, the gift that has hauled me back, step after step, untold times, to the world of beauty and possibilities and healthy love in which I live — here, now, today.

This article originally appeared in the Fall 2020 issue of Washington Trails magazine. Support trails as a member WTA to get your one-year subscription to the magazine.