How Far Is It? The Truth Behind Trail Measurements
Photo by Keith McDaniel.

How Far Is It? The Truth Behind Trail Measurements

Measuring distances on trails is tricky business. Here’s how it works — and why sometimes numbers from different sources don’t match up | By Donna McBain Evans

Maybe it has happened to you. You finish a long hike, check the stats of your Global Positioning System (GPS) unit and find that your own reading was 8 miles, but the map said 10 miles. There is no crisis here — you got to your destination and back just fine. But why the discrepancy? Is the map wrong? Is the trail sign out of date? Maybe your GPS fritzed? How do public agencies measure trails? And how do mapmakers obtain the most precise distance available?

Trail distances from different sources are sometimes conflicting. There are many reasons, such as trails being rerouted to deal with a landslide. And different methods of measuring are going to come up with different distances. A carefully calibrated GPS, for instance, is going to be much more accurate than your Fitbit.

Understanding how trail distances are measured means learning a bit about the various techniques. 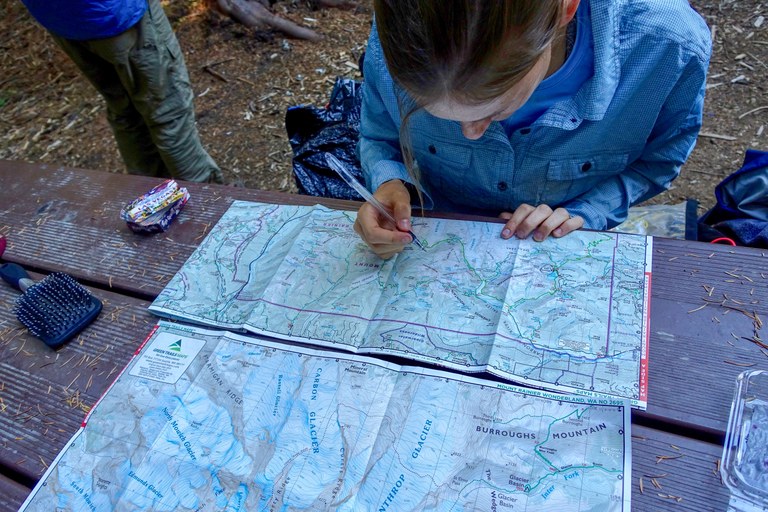 A hiker researches trail lengths on a map. Photo by Sarina Clark.

Land surveyors once used 100-foot-long metal tapes to achieve accurate readings. But this method did allow inconsistencies based on human error or kinks in the tape.

Since the 1980s, professional surveyors have relied on electronic distance measurement devices, which are considered to be twice as effective as handheld tape measures, but are not practicable in heavily treed or rough terrain. In addition to these survey methods, there are three other common methods to calculate distance: calibrated wheels, pedometers and GPS signals.

By today’s standards of using sensors and microchips to process information, the simple calibrated wheel seems downright archaic. But in truth, a wheel — like on a bicycle, only attached to an arm one can hold while walking — is an effective and accurate device for measuring distance.

The wheel size is calibrated into a counter that tracks revolutions as you push it along. The number of revolutions times the circumference of the wheel results in distance traveled. Simple, right?

Kathy White, trail specialist with the U.S. Forest Service in Everett, says that in the mid-1980s, most of the Forest Service trails were surveyed using wheels. It was faster than standardized survey methods and still extremely accurate. At that time, the Forest Service made regular surveys of trail conditions, and the wheeled distance measurements were used to indicate to trail crews where problems were.

But calibrated wheels can cause reading errors too, if a wheel hits rocks, bumps or steps in the trail. The wheel could slip on rock and stop rolling, or it could over-read distance on a series of steps, since the wheel follows each step’s vertical and horizontal distance, rather than travelling in an arc like a human foot.

“These days,” she says, “we have gone back to standard survey techniques to measure trail distances, using a 100-foot measuring tape for distance plus a clinometer to measure slope.” While time-consuming, these methods, she says, gives them the accuracy they need to communicate information to crews constructing trails or repairing trail damage.

Jim Ziolkowski, trails supervisor at Mount Rainier National Park, says that calibrated wheels have been the standard at the park in the past but that they are gradually changing over to digital mapping and using GPS data. 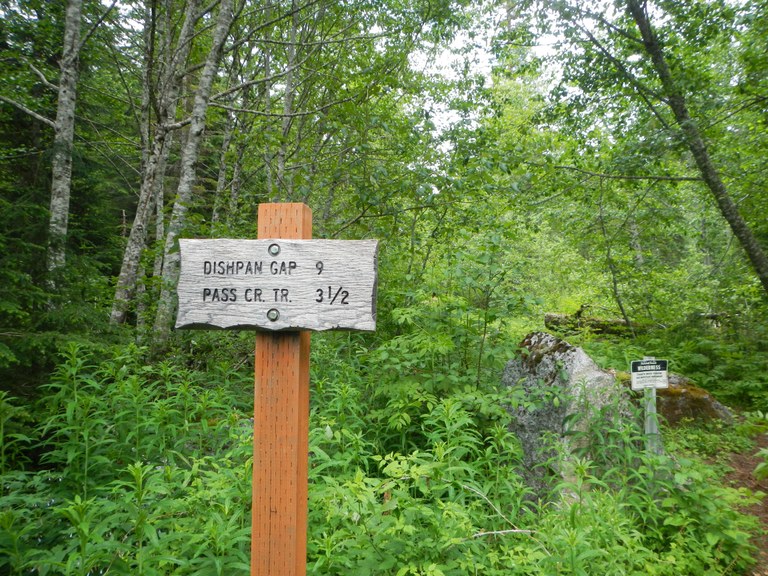 “Every trail gets measured at most once in 5 years,” he said, “yet natural forces erode drain bars and sections of trail almost every year.”

That, he explains, is one reason why trailhead mileage signs might vary from actual mileages.

And while methods like tapes and calibrated wheels are extremely useful and accurate for surveys of trail sections, they’re not useful for hikers and other trail users. For them, GPS and, to a lesser extent, pedometers, are more userfriendly methods for tracking distances.

There are dozens of pedometer apps and devices on the market. Most of them use a predetermined step length based on height and either body weight or gender (on some devices you can measure your own step and enter that information to get a more accurate step length). The more accurate pedometers use something called an accelerometer to measure force that is created when you move from side to side while walking or running. This same technology is what is used in smartphones to indicate a need to change the screen orientation from horizontal to vertical.

The newest generation of pedometers use a “three-axis accelerometer” so that movement in all three dimensions is captured. Even with these improvements, the best pedometers are usually only accurate within 5 percent. 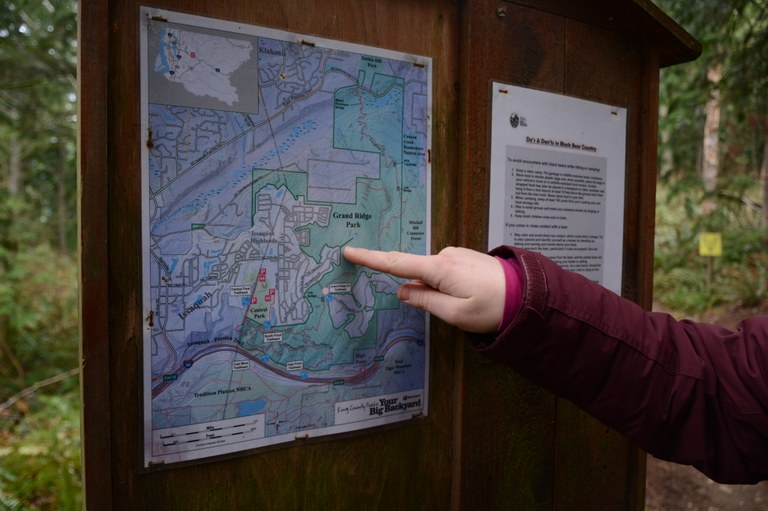 Maps are always a welcome sight at the trailhead. Photo by Erika Haugen-Goodman.

Pedometers are most accurate on a treadmill or flat sidewalk, where your calibrated steps are quite regular and there are no elevational changes or obstructions. But they work less well to measure actual distance traveled on uneven terrain.

When you are walking on a trail, going up and down hills, scrambling over rocks or stepping around or over tree roots, your gait and step length will vary considerably. Also, when you hike uphill, your step length shortens, and downhill it typically increases. A slow walking gait also causes more variation because the device has a harder time detecting the movement.

The bottom line is that pedometers can be great if you have a well-calibrated step and do not encounter much variability on the path. For greater accuracy, you need a device with GPS.

Thanks to a distant armada of satellites positioned 12,000 miles away in orbit, it is getting easier to know our way while exploring the backcountry.

The first generation of GPS satellites was launched in the late 1970s. Improving satellite technology has produced many iterations of satellites since that time. One of the most important changes came in 2000, when President Bill Clinton authorized the end of “selective availability,” a practice whereby nonmilitary users got a deliberately degraded signal from satellites.

This instantly and dramatically improved the precision of civilian GPS signals and launched the modern race to develop increasingly accurate devices for consumers. 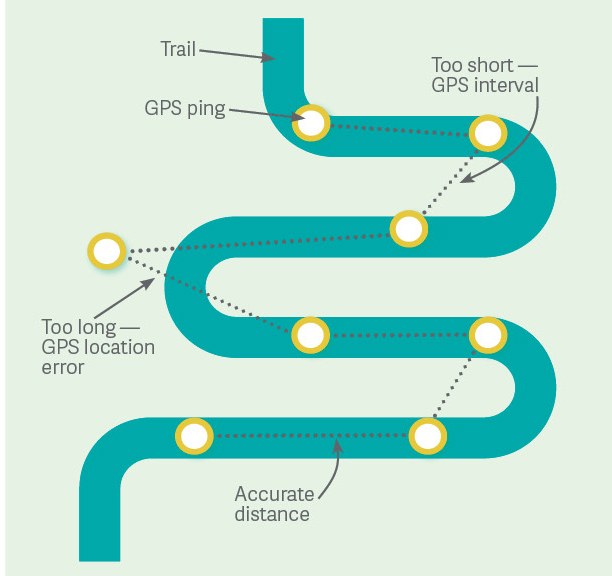 Have you encountered a switchback error on trail? A trail that switches back and forth can lead to inaccurate distances, as measured by GPS. If your location is recorded at intervals, it’s easy to get a shorter distance. If the GPS signal is off due to interference or other issues, it’s also possible to get an inaccurate distance.

GPS (How it actually works)

To determine your position, GPS sensors in your device pick up signals from satellites, which provide information to allow the GPS device to calculate the distance to the satellite. A device needs at least three signals to determine a precise location — but the more satellites your GPS can see, the better your accuracy.

There is also a network of ground-based stations that enhance the satellite signal by transmitting correction data back to the satellite. This system, known as the Wide Area Augmentation System (WAAS), can dramatically improve the accuracy of GPS devices that use it. (It does use up batteries quickly, however. Some devices have the option to turn WAAS on or off.)

Many factors contribute to how accurate a GPS device is, including where satellites are in relation to you; what is blocking your view of the sky, such as trees or cliffs; and other factors, such as if you’re near high-voltage power lines. Most GPS devices have an accuracy of 3 to 5 meters.

“Most distance discrepancies come from small accumulated errors,” said Anna Johnson, chief technical officer and co-founder at Gaia, a subscription-based app popular with hikers. “Imagine if every other GPS point taken is off 5 feet to the left or right of your actual position. That can add up to a lot of distance.” 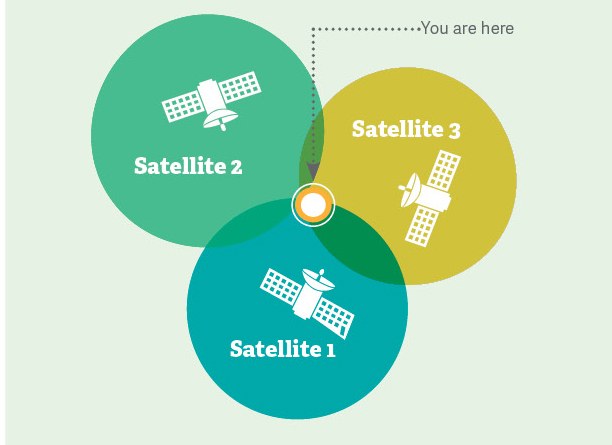 GPS tracks you in a similar method to the triangulation done with map and compass, except with a 3-dimensional system — imagine that the circles above are actually spheres. Your GPS receives information from satellites that allow it to calculate the distance from the satellite to you. If it can see three satellites, it can pinpoint your location. The more satellites your GPS can see, the more accurate the location will be.

Anna says Gaia has developed algorithms to adjust for errors that occur in the signal but there are still difficulties distinguishing between signal error and switchbacks, for example.

So, if you’re using a GPS device to track how far you’ve walked, know that several factors, such as how fast you’re walking and how often your device checks the satellite, can affect your accuracy.

Alan Coburn, president and CEO at Green Trails, says their team of field engineers use map-grade survey techniques to overcome these challenges. Green Trails maps are known for their detail and accuracy and are popular with hikers in Washington.

“We utilize a field-based team to regularly check trails, especially after trail washouts or relocations,” he said.

“And in areas where dense tree cover or other obstructions may degrade the GPS signal, we spend extra time — such as at the curve of the switchback or trail unconformity,” he said. “Then we wait at that position while the signal calibrates.”

Hikers don’t have the time or desire to wait for these more precise GPS readings. Mapmakers stake their reputation on it.

The drive to get ever-better signals to GPS units is ongoing and relentless. More satellites with longer life spans and more accurate signals have been added to the network. New GPS units can connect to those satellites, as well as satellites launched from Russia and Europe.

All of those additions to the array of satellites can improve accuracy. All this is to say that for hikers, runners and outdoor enthusiasts, GPS is only getting better for finding your way in the woods, providing accurate distance information and getting you home safely. If you love data, fitness watches are fun, but not reliable for measuring distances. Today’s GPS devices are sophisticated, but many factors can still lead to inaccuracies. For the very best information when planning trips, however, consult a reliable map.

And remember to always keep that map and compass handy. GPS is a powerful tool, but it can fail. It is always good to step back and get the big picture of where you are in the landscape.