Bronka Sundstrom has traveled countless miles on Washington trails, setting the record for the oldest woman to summit Mount Rainier. At 96, she’s still finding joy on the trails that have been her comfort. | By Jessi Loerch

Bronka Sundstrom has been a fixture at Mount Rainier for decades. While official records aren’t kept, it’s likely that she has made the hike up to Camp Muir more times than anyone, except for a few professional guides. And when she climbed Mount Rainier in 2002 at 77 years old, she became the oldest woman to summit the mountain. That record still stands.

For years, Bronka and her husband, Ake, hiked regularly at Mount Rainier, including dozens of trips up to Camp Muir each season. One year, she hiked to Camp Muir 50 times. At age 90, she hiked to Camp Muir. The plan was to summit Rainier again but bad weather forced her and her guide to stop at Muir. She hiked Muir again the following year, when she was 91. Last year, Bronka’s many accomplishments were honored when she was inducted into the Tacoma-Pierce County Hall of Fame.

Throughout her life, Bronka has found joy and solace in hiking, even through tremendous pain. She lived in Poland when the country was invaded by Nazi Germany; she and her family were sent to concentration camps. Bronka was the only member of her family to survive. Now 96, Bronka still enjoys hiking; she even enjoyed a hike at Second Burroughs at Mount Rainier National Park to celebrate her birthday last summer. Even though she visits Mount Rainier less frequently than she used to, she is often still recognized when she hikes there.

After British forces liberated Bergen-Belsen, Bronka was taken to Sweden. She was near starvation and needed months to recover. While in Sweden, she met Ake Sundstrom, whom she later married. She was delighted that Ake enjoyed hiking, which helped her cope with the intense loneliness of losing her family.

When she and Ake immigrated to the United States, they settled in Tacoma and later built a cabin in Ashford, which they moved to full-time when they retired in 1980.

While Bronka is certainly an accomplished hiker, it has never been about the speed or the numbers for her. She enjoys each time out on trail for itself. She’s quick to emphasize the value in slowing down to see what’s around you — and ultimately being able to hike farther and longer. Bronka and Ake spent a good portion of their time at Mount Rainier, where they were volunteer rangers. Ake also taught Bronka how to ski and they loved skiing at the park in the winter and hiking there often in the summer. Bronka loved all the people she met on the mountain, many of whom became friends or later reached out to her for advice. When Ake passed away, he was honored with a memorial at Longmire in Mount Rainier National Park.

“That’s the secret. The one who goes slower will make it farther. It’s important to start slow and go with your breathing.”

“That’s the secret. The one who goes slower will make it farther,” she said. “It’s important to start slow and go with your breathing."

While Bronka hiked to Muir more times than she can count, she never got tired of it. It was different every time. She enjoyed seeing different birds or noticing plants she hadn’t seen before. And she loved meeting new people or seeing old friends. Every trip was unique.

They left from Paradise, reached the summit, and were back to Paradise in just 18 hours — a quick time. 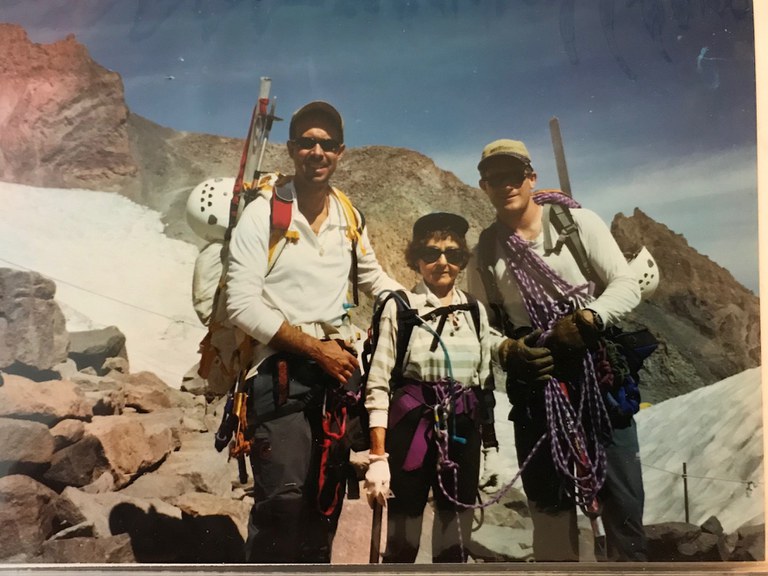 Bronka and fellow climbers, Jason Edwards and Ryan Stevens, on their way to the summit in 2002.

Bronka remembers that trip with fondness — although she was extremely surprised to find the summit was not completely snow covered. The gravel was a shock. But the overall experience was one of awe.

“We saw the stars and the sun come up — everything was gorgeous,” she said. “I was too excited to notice the cold. It was very special to all of a sudden see the stars, and at three times the size they should be. Everything was so bright. There was no limit to what you could see. It was so special, so beautiful.”

After returning home from the summit, Bronka woke up the next morning to find TV vans outside her house. They hadn’t called ahead to ask if they could talk, and she wasn’t interested in an impromptu interview. So she slipped out the back door, drove to Mount Rainier and — as she’d done so many times before — hiked up to Camp Muir.