Miles of Medicine
Billy Frank Jr. Nisqually National Wildlife Refuge was one of the locations where veterans hiked as part of a study to help understand the benefits of nature on their mental health. Photo by Philip Wilkinson.

When war leads to trauma, trails may lead the way out. | By Charlie Wakenshaw

In 2008, Joshua Brandon was stationed at Joint Base Lewis-McChord, the military base near Tacoma, between his second and third tours of duty in Iraq. He could see Mount Rainier every day and he started hatching plans to climb to the summit.

“Getting out here was my first real touch of being exposed to wilderness,” he said. “You’re surrounded by mountains. Rainier is staring at you every day and I’m like, it’s there, we gotta go climb it.”

Joshua commanded the 32nd Stryker Brigade at the time and got his platoon leaders involved with his plan. They formed a climbing team and got to work.

Joshua grew up in Cleveland and says his experience with the outdoors prior to being stationed in Washington was limited to the Cleveland Metroparks. So when he set his sights on Rainier in 2008, he knew it wouldn’t be easy.

Joshua calls their first summit attempt an absolute disaster. It was late in the season, a storm was brewing and one person on the team got hit in the head with a rock on Disappointment Cleaver, forcing them to retreat. Even with this mishap, Joshua says they got back down to Camp Muir and looked at each other and just started laughing. They agreed, it was one of the coolest things they’d ever done. For Joshua, it was even more than that — it was medicine. 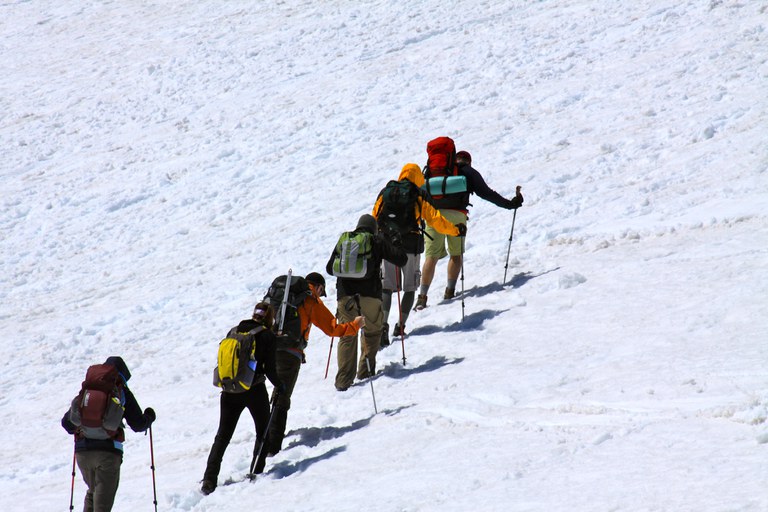 Joshua Brandon was inspired to climb Mount Rainier when he could see it from where he was stationed at JBLM. He trained for the climb with fellow members of his brigade. Photo courtesy Joshua Brandon.

Before his Rainier challenge, Joshua had been serving in Iraq during an especially trying period of the war. One of the first nudges to seek help for his mental health came when he returned to base after a mission. A colleague he respected came up to him and said, “After combat we clean our weapons, but we never clean our minds. Make sure you take care of yourself.”

When he returned home from that deployment, Joshua’s family noticed a difference in him. He noticed it too. He started to see typical symptoms of Post Traumatic Stress Disorder (PTSD) — heavy drinking and self-medicating. Joshua sought help from the U.S. Department of Veterans Affairs and was formally diagnosed with PTSD, then prescribed medication and limited therapy. The treatments worked okay, but it wasn’t until Joshua moved to Washington and started spending all his time outdoors training for Rainier (which the team ultimately summited) that he noticed a big improvement in how he was feeling, and even the quality of his therapy.

“My progression in therapy was often a lot more significant when I was constantly engaged in the outdoors,” he said.

Joshua began to wonder if he could use this experience to help other veterans.

A new way to treat PTSD

After leaving the military in 2012, after 10 years of service in the Army, Joshua started working to help get other veterans outside. He knew personally that the outdoors helped improve his PTSD symptoms, and he wanted to see this treatment become more mainstream. In order to do that, data and research were needed to back up his claims. He met Dr. Howard Frumkin, Dean of the UW’s School of Public Health at the time, and they started talking about formally testing the hypothesis.

Their study began in 2018 as a partnership between the University of Washington (UW) and the Seattle Epidemiologic Research and Information Center at the VA and was funded in large part by REI. Joshua advised on the project. The two pilot phases of the study each included six hikes over 12 weeks. The first phase consisted of one group of 12 veterans that went on hikes in natural settings, led by Joshua. The second phase included two groups of 13 hikers led by staff from Outdoors for All, one that hiked in natural settings and another that hiked in urban settings.

Dr. Frumkin initiated the study then, during phase 1, brought in Dr. Gregory Bratman, who studies the effects of nature on well-being at UW, and Dr. Alyson Littman, who is based at the VA and also a Research Professor in the Department of Epidemiology at the UW.

Dr. Littman says prior research on the effects of hiking on veterans diagnosed with PTSD does not meet the rigorous scientific standards for randomized controlled trials that are necessary to draw conclusions. This study would change that.

“Even though I can personally say that I enjoy my time in nature on trails, I think it’s important that we try to be rigorous and understand why that might be,” she said.

According to Dr. Littman, the study will specifically look at whether or not there are greater benefits in terms of PTSD symptoms, functioning and quality of life in people who hike in nature versus an urban environment, with the hope that the latter environment still provides benefits. The study also aims to start narrowing in on the sources of other benefits of group hiking for those suffering from PTSD, including physical activity and belonging to a community.

“One of the many challenges for our veterans with PTSD who are coming home from these conflicts right now is isolation, extreme loneliness and withdrawal,” Dr. Bratman said. “These interventions were intentionally designed to address that by bringing people together as a group.”

But why was hiking chosen, when there are so many other outdoor group activities to choose from?

“Hiking can be replicated everywhere,” Joshua said. “It’s something that most veterans either can do right off the bat or with minimal accessibility accommodations.”

Even in the first phase of the study, Joshua noticed promising results — results that were in line with what he himself had experienced.

“I noticed, in general, an increase in mood and self-efficacy within the group,” Joshua said. “(The participants) were just feeling better and they felt that they had a little bit of community.” Joshua also noticed that the hikes facilitated a social atmosphere. “(The hikers) started to look at the group as not just this hiking group they were in, but as this important social group,” he said.

Looking to the future

After two successful pilots, Dr. Littman says the next step is trying to get funding to do a bigger study. She, Dr. Bratman and others on the team are in the process of submitting grant proposals to the VA and the National Institute of Health for a national study. This scaled-up study would also add a third group of veterans who would not participate in any physical activity, establishing a control group.

Joshua has a vision of a brighter future for veterans diagnosed with PTSD. 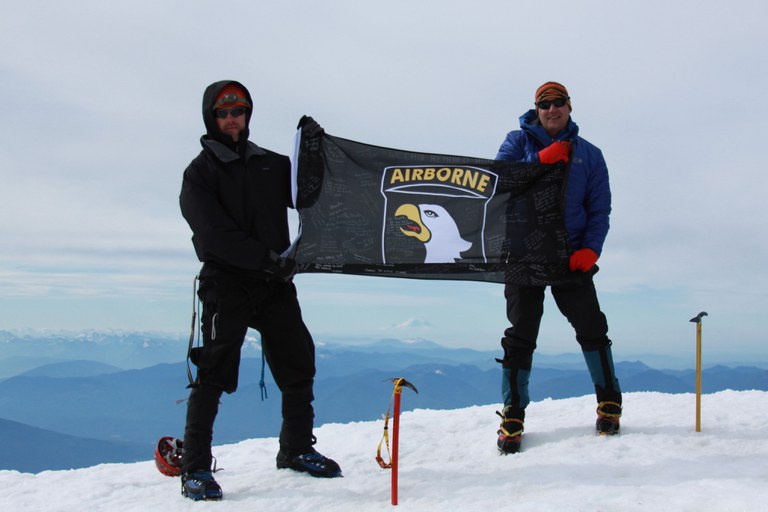 “Instead of just getting sent to a therapist and given some medicine, or worse yet just given some drugs and kicked off to fend for themselves, they get a backpack and a pair of hiking boots and they get put into these groups so they can reestablish community,” he said. “They can benefit from the effects of being out in small groups in nature, and it complements traditional mental-health care.”

For now, Joshua is happy to be back in Washington and able to hike the state’s trails again, after 18 months away working on the East coast.

“I’m going back and hitting all of my old favorite spots,” he said. “Being gone for a year and a half felt like being gone for 10 years, so it’s like seeing these places again for the first time. It’s absolutely cool.”

Paving the way to hiking treatments for PTSD

For something like post-traumatic stress disorder (PTSD), there is no one magic cure — a combination of treatments often proves most effective. In addition to two main types of treatment, psychotherapy and pharmaceuticals, the U.S. Department of Veterans Affairs also grants funding to a variety of organizations that run adaptive sports programs.

While some of these programs include nature therapy and hiking, these activities are not widespread. But that could be changing — two key actions in 2020 show that policies are shifting to help improve access to the outdoors for the veteran community. The federal Accelerating Veterans Recovery Act, which was signed into law on December 5, establishes a task force to increase access to public land for medical treatment and recreational therapy for veterans. Also, on the eve of Veterans Day, former Secretary of the Interior David Bernhardt announced that veterans and Gold Star families will have free access to National Parks from here on out.