More Than Just a Cup of Coffee
Photo by Charlie Wakenshaw

More Than Just a Cup of Coffee

Getting more people outside, especially those who have been previously shut out from the outdoors, is the goal of Campfire Coffee. Quality coffee is the way to bring people in. | By Charlie Wakenshaw

A sign reading “Share the Outdoors” hangs on the wall of the Campfire Coffee shop in downtown Tacoma, above bulletin boards full of hiker selfies. For Quincy and Whitni Henry, the founders of Campfire Coffee, it’s not just a nice sentiment. It’s the whole reason they got into the coffee business — to make the outdoors more inclusive.

“We’re not in the coffee business for the sake of coffee,” Quincy said. “There is a community, altruistic aspect.”

Camping and the outdoors have long been important to the Henrys, and they want everyone to feel welcome in the outdoor community. 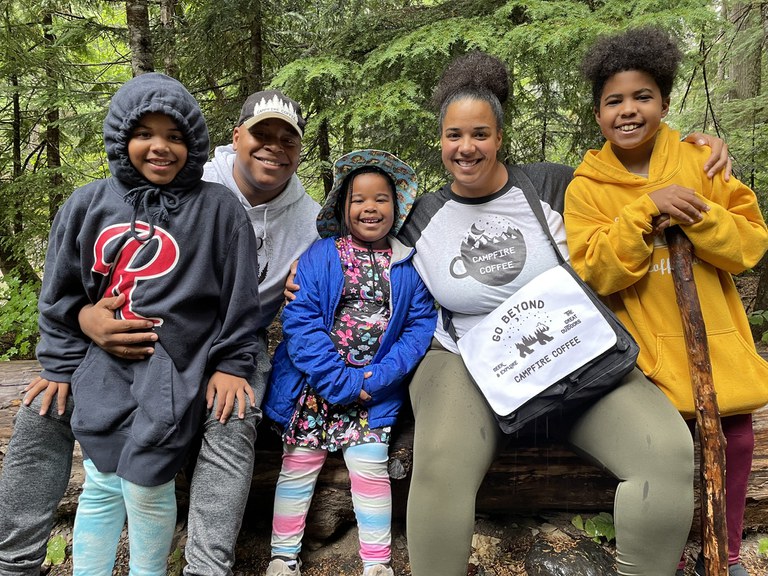 Quincy and Whitni Henry out enjoying a hike with their three kids. Photo courtesy of Quincy Henry.

“We started thinking about camping trips we’ve taken,” Quincy said. “Usually we’re the only Black family at the campground. And it’s always funny if you do happen to see another Black dude there … you kind of have this nod like, ‘I see you, you see me.’ I’ve had that interaction enough times to know that it’s because we kind of feel alone.”

Getting more people outside, especially those who have been previously shut out from the outdoors, is the goal. Quality coffee is the way to bring people in.

“The utility of coffee isn’t just coffee,” said Quincy. “There’s some engine behind (it that) brings people together.”

When the shop opened and the coffee was flowing, this theory proved true; the space was needed. People come in to get a cup and talk about their weekend outing to Mount Rainier or Dash Point or to ask for hike suggestions. Hikers compare notes as they sip Mountain Top Espresso Blend or Summer Camp Roast. Hikers have found community where they didn’t have any before.

“We just want to see more people enjoying the world around them,” Quincy said. “If we can play a role in making that happen, great.”

As a small, local, Black-owned, woman-owned, veteran-owned business, Campfire Coffee provides more than just community. It also provides an important way for hikers to help more people enjoy our public lands by shopping somewhere that gives back. It’s been a busy first year making the Henrys’ mission a reality. Not only have they opened a storefront in downtown Tacoma and honed their wood fire roastery — yes, they actually roast their coffee over a campfire — but they also gave back through their nonprofit. In 2021 alone, The Campfire Explorer’s Club donated $20,000 to organizations focusing on outdoor education for youth and awarded five camping trips to families at no cost.

“The recreation economy is going to be this conduit to … bring to the forefront the idea that we can make a very positive difference right in our own backyards just by changing where we spend our dollars,” Quincy said.

For the Henrys, owning a business has become a way to change the outdoors — one hiker and one cup of coffee at a time. 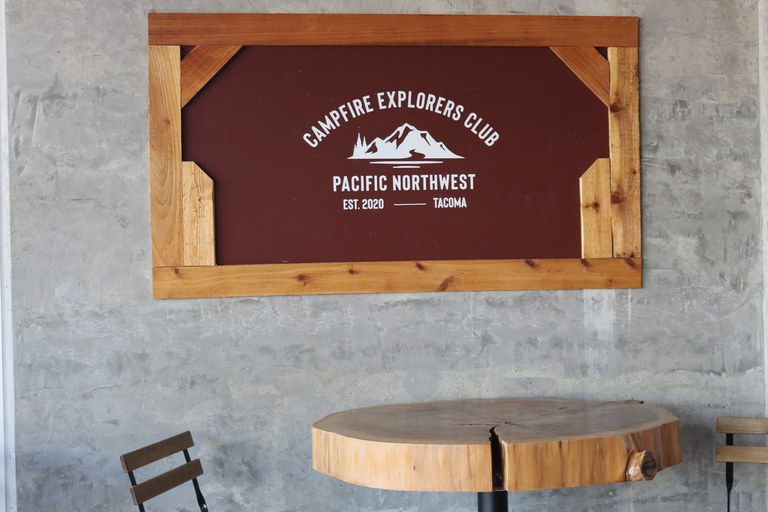 The Campfire Explorer's Club is Campfire Coffee's nonprofit that gives back by getting more youth and families outside. Photo by Charlie Wakenshaw.

On the day we talked, Quincy had just picked up an order of green coffee beans in the Puget lowlands north of Tacoma, dropped them off at the roaster, then made his way to the shop where he checked in with the baristas before sitting down with a cup of coffee to chat. He checked his phone occasionally for updates about the roasting of the latest batch.

“You gotta be watching the fire, watching the beans, watching the smoke,” he said, detailing the process of roasting coffee over an actual wood fire, “You watch it, feel it and smell it … the smell of the roasting process gives you clues as to what you need to do.”

He and Whitni came up with the idea to roast their beans over a wood fire because of all the camping they had been doing. Building a fire was second nature, so Quincy said they decided to give it a shot.

“We went into the fire pit in the backyard and had some green coffee beans that my wife had ordered and had a popcorn shaker and tried it out,” he said.

They now use custom fire boxes Quincy designed, but they still use a real wood fire. Burning local, sustainable wood rather than fossil fuels is an intentional decision to lessen their carbon footprint, something Quincy says outdoor recreationists should be keenly aware of.

“People that lean toward the environment, those are going to be the people that care because they’re on the front lines of it,” he said. “Our [outdoor] industry existence is reliant on these spaces being habitable.”

Quincy said, “Everybody wants to be able to do it faster, and more. And, we’re kind of the opposite. We’re not trying to make it harder on ourselves, we’re just trying to stay true to it, which means there is a little more work involved.”

Some of that extra work came when they were opening up and construction setbacks and pandemic lockdown made it challenging to get the business off the ground. But from the very start they knew they were on the right track. Around that time, the Outdoor Industry CEO Diversity Pledge was released with over 50 organizations and companies from the outdoor industry committing to making the outdoors more inclusive. (WTA signed onto the pledge in 2019.)

The need for representation and community was reaffirmed when their doors opened and outdoor industry insiders, coffeelovers and hikers all came by to get a cup and support their mission. Quincy said, “I think the fact that we’re Black…other Black people were like ‘wait a minute you go out–and camp?’ And then it was like, wink wink, nudge nudge, ‘I do too.’”