Listening to a podcast gives you a deep, personal connection to people and places; it's like sitting down with a friend. Here are four shows that will immerse you in adventure and the great outdoors | by Shannon Cunningham

You are listening to the Dirtbag Diaries, a production of Duct Tape Then Beer.

Fitz Cahall was a writer, struggling to share his stories about climbing that magazines didn’t want to cover, around the time podcasting began to take off. He’d heard podcasts could be a way to share stories directly with others. So he bought a $100 digital recorder, a microphone and “Podcasting For Dummies,” and he threw himself into recording his stories.

He sent his first episode to a few friends, who then sent it to more friends. Fitz soon found his stories reaching more people than he had ever anticipated. The feedback he received was that they were different than what was already out there.

“Podcasting was new, a radio show you could get anytime,” said Becca Cahall, executive producer for Dirtbag Diaries. 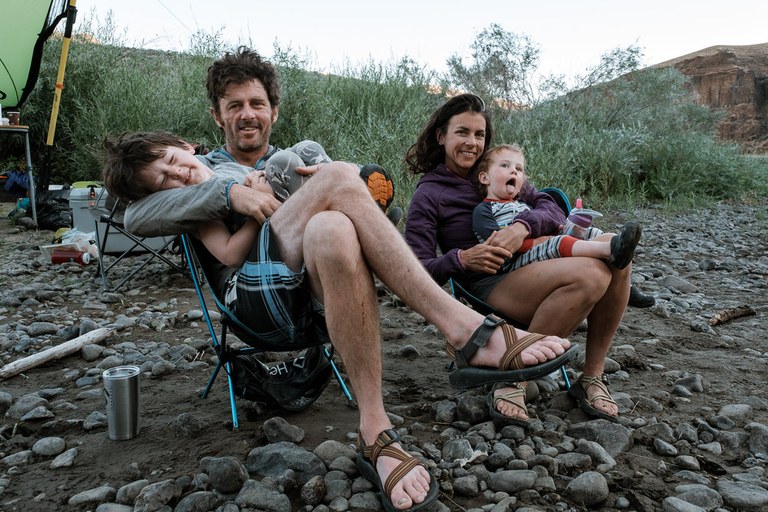 Becca Cahall and Fitz Cahall, the creators of Dirtbag Diaries, live in Seattle with their kids. They bring their passion of the outdoors to listeners around the globe.

Becca and Fitz met at the University of Washington. After a few years of wandering on the West Coast, the couple settled in Seattle. Since 2007, their audience has heard stories of adventure coming from the closet in their apartment that doubles as a studio.

“If you listen carefully, sometimes you can hear the sounds of our young children filtering under the door,” Becca said.

Dirtbag Diaries is known for its captivating journalistic narratives, often combined with music and sound effects, that provide context, perspective and emotional connection. The podcast has more than 200 episodes, most planned out a year in advance. Alongside their feature episodes, they have branched out into several series such as The Shorts, a story-sharing project from members of their community, and Mileposts, tales that revolve around our national parks.

Becca says the podcasts mirror their own lives.

As the couple’s priorities have changed over the years, so have the priorities of the podcast.

“Do I miss the simpler days of youth? Yes. But, if I think back honestly, there was an underlying feeling of angst of the bigger ‘life’ questions,” she said. “Now, I couldn’t imagine my life without Fitz, our kids and the community of friends that we have. That feeling of contentment has come through evolving.”

Listeners who have been with the Dirtbag Diaries from the beginning know that the stories they have been listening to have matured over the years, along with the outdoor industry.

“The outdoor industry has grown to become an advocate to reflect what is happening in the community,” Becca said.

“The show has used its voice to share concerns on topics such as our public lands and the environment in conjunction with well-known names in the industry such as Patagonia.

The podcast strives to reach its followers with entertaining and inspiring adventures, yet also calls on them to be better advocates. Becca’s favorite episodes are the Endangered Spaces series that encourages others to be active in protecting the outdoors and become familiar with complicated political issues by separating fact from fiction. The series provides the background research to help people educate themselves.

"Being a part of the community means being aware of what is happening within that community and incorporating it into your life,” she said.

You can find Dirtbag Diaries at dirtbagdiaries.com.

Inspiring you to get out on the trail and a whole lot more.

Rudy Giecek, who grew up in Granite Falls, says he’s just an average hiker who loves the inspiration of hearing other hikers’ stories. He started listening to podcasts such as Trailside Radio and Mixed Mental Arts a few years ago. He enjoyed how easy it was to get a lot more from the time he spent driving for his job as a distributor.

When Rudy began his own podcast in March 2016, it allowed him to move from writing on his website, North Cascade Hiker, to a format that provided more information about hiking and backpacking in less time. 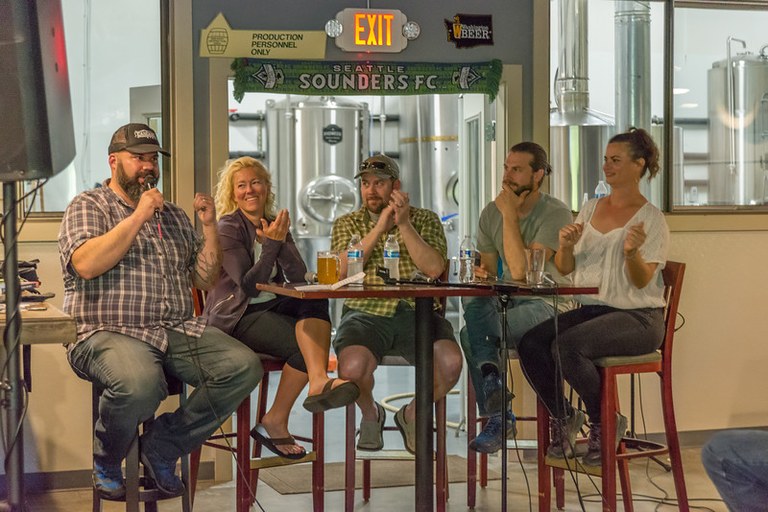 “I can get the equivalent of 10 articles out of one podcast and it is all good content,” he said.

Typing is not his strong suit, he says, but chatting with others about hiking definitely is.

“There is a big difference between just reading materials and having a conversation with someone. You feel like you really get to know them,” Rudy said.

Material for his podcasts first came from interviewing hikers he knew and groups he wanted to learn more about. He soon began to get ideas for new guests, including authors and hiking and backpacking “celebrities.”

Although the original episode of Cascade Hiker Podcast was with a fellow hiker as a guest, Rudy’s very first recording was actually with his parents, who grew up enjoying the outdoors in Washington.

“I give them credit for my love of hiking and knowledge of the North Cascades,” he said.

More than 2 years later, he has more than 100 episodes on a wide range of trail-related topics. 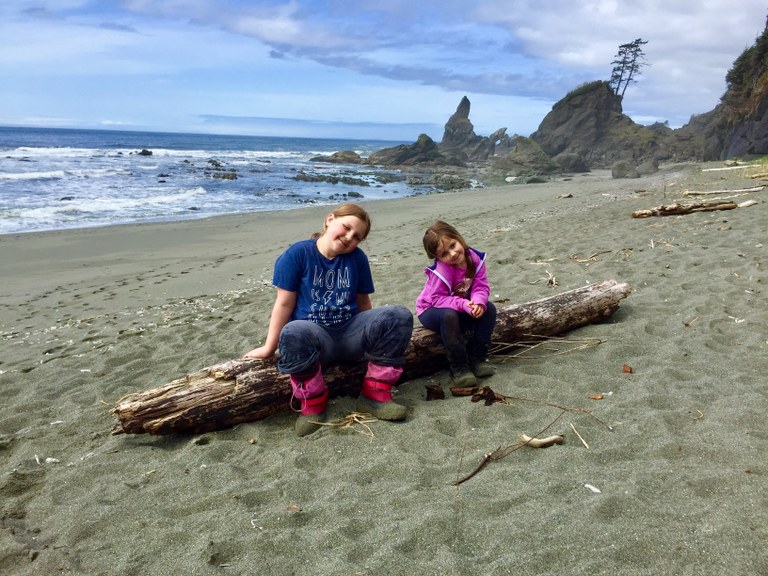 Rudy makes his podcast a family affair. He's interviewed his parents and helps his daughters with their own show.

Podcasting is a full family affair for Rudy. He helps his daughters, Raichel and Reggi, create the Kids Cascade Hiker Podcast, which brings inspiration to young hikers. His girls talk about berries and flowers, their first backpacking trip and staying on the trail, among other topics.

Rudy recently recorded his first live podcast, where he interviewed four authors who wrote a series of guidebooks for sectionhikers of the Pacific Crest Trail. The event also raised money for the PCTA, which he volunteers with as a trail crew lead.

Rudy enjoys the time he spends recording his podcast but admits it is more than just fun.

“I hope to contribute and give back to the hiking community, just as organizations like Washington Trails Association do,” he said.

You can find Cascade Hiker Podcast at cascadehikerpodcast.com.

The By Land podcast is a relative newcomer. Emory Wanger, who lives in Southwest Washington, has shared close to 35 episodes since he created the show about a year ago. His show is about helping people enjoy the outdoors. He talks about lightweight and cottage-industry gear and long-distance hiking, as well as other activities that take place in the wilderness, like photography and hunting.

After returning from serving in the military, Emory wanted to give back in a way that was healing and a positive influence. He hiked with Warrior Hike to help other veterans who might be struggling to reconnect with society.

“Connecting with other veterans is a great way to share experiences and cope with whatever issues might be going on under the surface,” Emory said.

Volunteering with Warrior Hike led him to hike the Pacific Crest Trail in 2017.

Emory started sharing his stories with a blog, but added a podcast after becoming familiar with the medium on his long commutes to work in Portland. He chose a conversational style for his podcast.

"Connecting with other veterans is a great way to share experiences and cope with whatever issues might be going on under the surface."

“I want my show to be all about the guests and helping them get out their story,” he said.

His first episodes were with his fellow hikers from the PCT. Now, Instagram is where he connects with fellow adventurers. “Ellie on the AT” has been Emory’s favorite episode, an interview with a young couple who hiked the Appalachian Trail with their toddler. It particularly resonated with him because he will welcome his first child this fall. 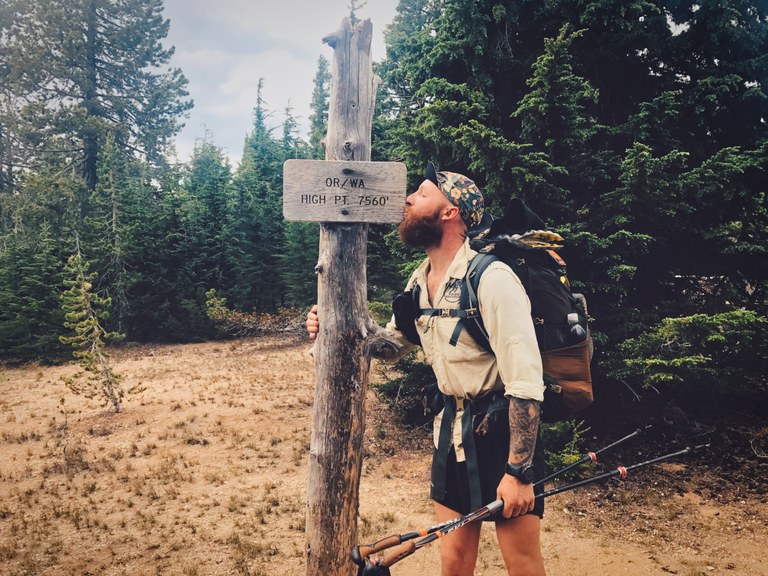 Emory Wanger's podcast started with the PCT, but has grown to much more.

“The idea of experiencing the wilderness through the eyes of a child is something I sincerely can’t wait for,” he said.

Emory talks on his podcast about mental focus and techniques to promote a better outdoor experience. He goes beyond just the gear, and he hopes that, by sharing what has worked for him, he will inspire others to get out, too.

“I took a group of five friends on their first backpacking trip and they spent the whole time with smiles on their faces,” he said.

Although he can’t see his audience, Emory hopes to create the same feeling of joy for the outdoors through his podcasts.

You can find By Land at byland.co/podcast.

A podcast for and about women who are inspired by time spent outside.

Gale Straub is an adventurous outdoor woman. Several years ago, she quit her job, traveled the country in a van and started the website She Explores. She wanted a way to tell the stories of other adventurous women.

After a couple years, she was looking for a way to form a deeper connection with some of those women — and a podcast offered that. The open conversations gave her room to really get to know other women and to share stories in new and powerful ways.

Gale hopes to present a diversity of stories in her podcasts — she wants to show that all sorts of women, of all ages and all abilities, are enjoying the outdoors. Elite athletes aren’t her focus; she tries to tell the stories of everyday women.

Early on in her podcast, she devoted two episodes to the issue of diversity, equity and inclusion in the outdoors. It’s an issue she’s come back to in different ways. Recently, she featured Jenny Bruso of Unlikely Hikers, a Portland woman who describes herself as fat, queer and femme. Jenny talks about making the outdoors a welcoming place for anyone, including those who might feel they don’t fit the mold of a standard hiker.

While Gale’s podcast features women from all over, her show has included a number of women from Washington state, including Sarah Menzies, a Seattle filmmaker who created “Afghan Cycles,” a story of Afghan women using bicycling to find freedom, which was shown at the Seattle International Film Festival.

"I want to do more; I want to push myself"

Gale also had a podcast set in Washington recently. She visited Olympic National Park to go backpacking with two other women — women she knew only from online interactions. The podcast explored what it’s like to really get to know people in a world that’s completely offline. While the women explored, they met Lorraine Greene, a member of the Makah Tribe. At the time, Gale felt too shy to ask Lorraine for an interview. But once she was back home, the podcast gave her a reason to connect with Lorraine. Gale called Lorraine, who talked on the podcast about her tribe’s connection to the land and to each other.

Gale finds joy in how the stories she tells touch other women. One listener emailed to tell Gale that, while her father was dying of cancer, listening to She Explores kept her connected to the outdoors. 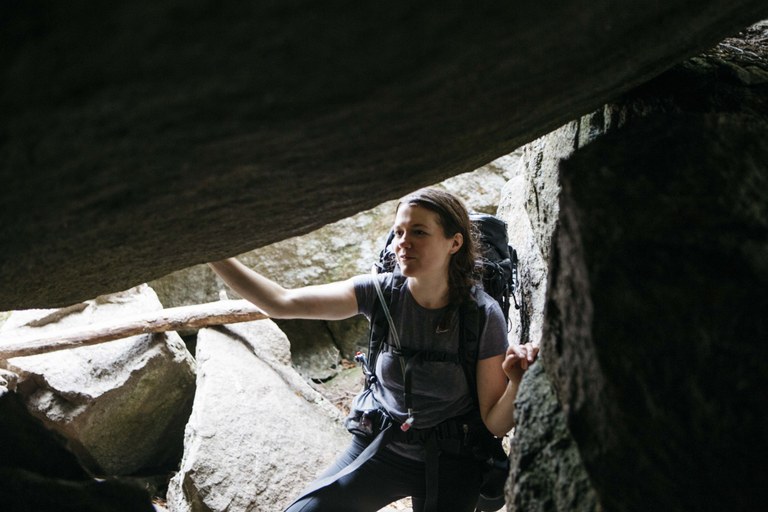 Gale is excited to keep learning, expanding her skills and exploring what she can do with her podcast.

“I want to do more; I want to push myself,” she said. “I never want there to be a formula.”

Find She Explores at she-explores.com.

This article originally appeared in the July+Aug 2018 issue of Washington Trails Magazine. Support trails as a member of WTA to get your one-year subscription to the magazine.