Science by the People
Photo by Steve Weileman.

Science by the People

From exercise and relaxation to counting birds and butterflies for the sake of science, people hike trails for many reasons. Some community scientists, people who volunteer their time to collect data in collaboration with professional scientists, are using their time outdoors to make a big difference in our trail community. They use trails that WTA helps maintain, they contribute to land conservation that allows for creation of new trails, and they track the health of the ecosystems surrounding those trails. But what does a community scientist actually do? And what makes them different from an outdoor enthusiast?

Janneke Hille Ris Lambers is a biology professor at the University of Washington whose research focuses on understanding the biological impacts of climate change on plants. Many scientists, particularly those studying climate change, need to collect a broad variety of data over a long period of time to truly see climate change in action. Janneke is the creator of MeadoWatch, a community science program that collects data on plant communities in Mount Rainier National Park. 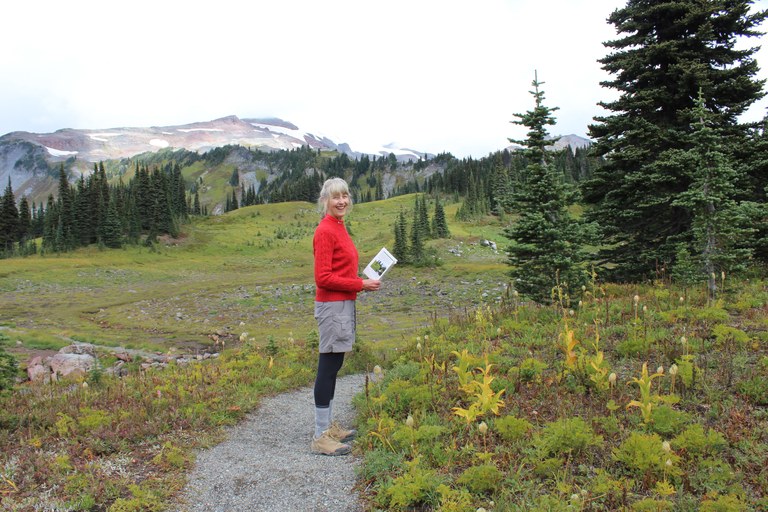 MeadoWatch volunteer Mary Marsh checks on the status of plants near Mount Rainier. Volunteers keep track of plants throughout their life-cycle to help scientists. Photo by Bethany Marsh.

“I consider MeadoWatch part of my research,” she said. “It's been great as a way to communicate science to nonscientists, but also as a way to generate a lot of high quality data about wildflower phenology (the timing of flowering, fruiting and seed production), something many in my lab are interested in.”

“I would define a citizen scientist as someone who is not necessarily trained as a scientist, but is helping collect and/or process data relevant to a scientific question." —Janneke Hille Ris Lambers

Janneke started MeadoWatch after receiving an award from the National Science Foundation. Launched in 2013 with roughly 40 volunteers, the program now has more than 150 people who commit to hiking trails and gathering data during the summer months on two trails in Mount Rainier National Park.

“I would define a citizen scientist as someone who is not necessarily trained as a scientist, but is helping collect and/or process data relevant to a scientific question. (Someone) not just interested in science, but actually participating,” Janneke said.

Volunteers must attend a 3-hour orientation that gives them scientific background, teaches them about the data they are going to collect and goes over species identification. They then pick one of two trails and sign up for specific days. As they hike, volunteers stop at between 11 and 17 marked locations along the trail. At each location they outline a plot and look for between four and six species listed on a data sheet. They mark which stages of reproduction, or phenophases, they see in those species.

Janneke says she and her lab are sold on community science because it provides quality data and increases awareness of trails and the ecosystems surrounding them. It also allows regular hikers a chance to learn more about what they see and the changes they observe firsthand. The analyses done by Janneke and her lab directly impact trails and the vistas we admire as we hike them. Issues such as species decline and plant adaptations as a result of longer or shorter growing seasons would be difficult to study without the input of a large body of people on the trail making regular observations.

Birders are a large part of the trail community, often utilizing urban and backcountry trails. Started in 1900, the Audubon Society’s Christmas Bird Count is one of the longest-running community science efforts in the country. Each year people all over North America participate in a survey of bird species, collecting data that allow for the study of long-term trends in bird populations.

In Washington, Audubon has also collaborated with the Washington Department of Fish and Wildlife (WDFW) to monitor three birds that depend entirely on sagebrush ecosystems: Brewer’s sparrow, sage thrasher and sagebrush sparrow. 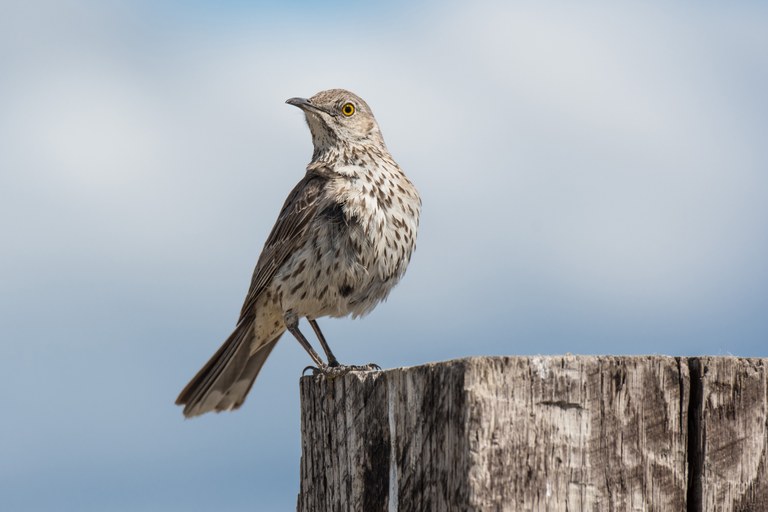 Sage thrashers were among the birds surveyed by community scientists in Eastern Washington. Photo by Tara Lemezis.

The Sagebrush Songbird Survey began in 2014 and will conclude at the end of next spring. In that time, more than 100 participants will have visited one or more sites on a monthly basis to document species’ presence during the spring breeding season. The results are entered into eBird, the world’s largest biodiversity-related community science database. Gathered data will affect conservation and land-use planning, and potential scientific studies for these areas.

“I find watching birds much more interesting if I can contribute information and feel that it’s helping us gather a better understanding of habitat and populations,” says Lindell Haggin, president of the Spokane Audubon chapter.

"One of the most exciting things about citizen science is that everyone can participate. Whether it's a family with small children, working professional or retired persons..." —Stephanie Kuhns

WDFW has five active community science projects across the state, all of which involve species that are uncommon, rare or represented by small populations. The Sagebrush Songbird Survey is one of these. The other four include a collaboration with the Washington Butterfly Association to survey butterflies in Eastern Washington and projects that survey for bumblebees, freshwater mussels and short-eared owls.

Another Audubon member from Spokane, Kim Thorburn, began monitoring greater sage grouse with WDFW in 2009, when the department was translocating birds to boost the dwindling population in Central Washington. Kim’s reports to wildlife biologists were thorough and invaluable, according to the district’s wildlife biologist.

Eventually Kim became interested in doing more, and consequently pursued a spot on the Fish and Wildlife Commission. She was appointed as a commissioner in 2015. She now uses her expertise to provide direction for the harvesting of fish and wildlife and the protection of habitat in Washington.

Beach and coastal trails are one of the best parts of living on the west side of Washington. Our natural affinity for the ocean often results in disturbance to coastal habitat, but it also means that people are very invested in the well-being of those places.

The Coastal Observation and Seabird Survey Team (COASST) is a community science program run through the University of Washington that uses beached birds as a standard monitoring unit. Measuring dead birds may be off-putting for some, but the story they tell is useful and they can be identified — rigorously — by anyone. 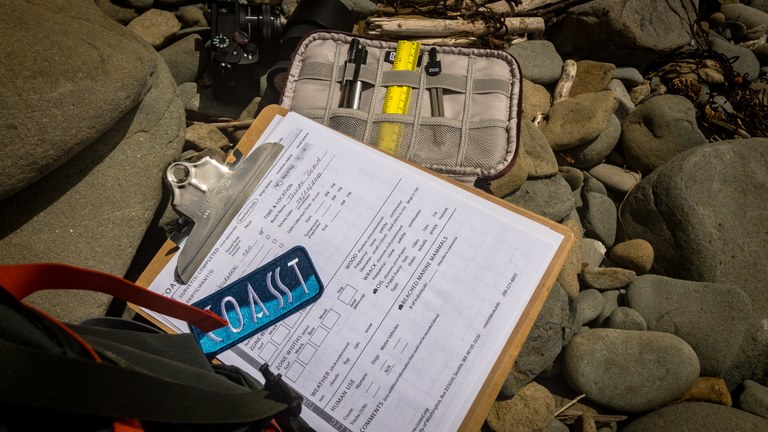 Coastal seabird biologist Julia Parish began the program to establish baseline data that would document marine changes. COASST’s effect over the past 17 years has been significant. The data collected by volunteers have been used by a broad array of domestic and international agencies and scientists to document the consequences of events such as oil spills, harmful algal blooms and fishery bycatch.

“A lot of cool discoveries can come from making repeated observations. You get to know a place and what you expect to see there, and so you notice when something unexpected shows up.” —Hillary Burgess

From a starting size of 12 volunteers collecting data on five beaches, COASST has steadily grown to 900 volunteers and nearly 450 beaches from Alaska to northern California. The breadth of the data has also expanded from beached birds. COASST now also tracks marine debris and human usage, and it serves as a sister program to similar groups collecting beached-bird data in Russia and Argentina.

After a 6-hour training, volunteers commit to survey a specific beach once a month. This regular collection allows COASST to provide high-quality data that can stand up to repeated scientific scrutiny. When volunteers encounter a beached bird, they take photographs and measurements, record characteristics about the condition of the bird and determine what species it is using a specialized guide.

Science Coordinator Hillary Burgess said, “The COASST standard is that all data can be verified independently — by experts — so we know exactly how accurate our participants are. A stunning 85 percent of birds are identified correctly to species — and that’s over 100 species and counting.”

Hillary adds that “a lot of cool discoveries can come from making repeated observations. You get to know a place and what you expect to see there, and so you notice when something unexpected shows up.”

WDFW’s Stephanie Kuhns agrees. “One of the most exciting things about citizen science is that everyone can participate. Whether it’s a family with small children, working professionals or retired persons, there are projects all over the world that can benefit from however much time people can contribute.”

Many see community science as a way of deepening our appreciation of the natural world and learning more about the science that goes into enhancing our understanding of what happens on and near the trail. Check out opportunities to stretch your science muscles on a trail near you!

Did you know, every time you write a trip report, you contribute to scientific research? Researchers at the University of Washington and the U.S. Forest Service use data from WTA trip reports to help gain information about when and where hikers are using trails — information that can help the land agencies best manage their resources.

This article originally appeared in the Nov+Dec 2018 issue of Washington Trails Magazine. Support trails as a member of WTA to get your one-year subscription to the magazine.