What You Need to Know About Spending the Night in a Fire Lookout
Photo by James Bernard.

Fire lookouts were the best way to spot developing fires in the forest before wildfire detection technology advanced. Some are accessible via hikes and available for overnight stays. We compiled a list of some of the Pacific Northwest's fire lookouts that can be reserved or are available on a “first-come, first-served” basis. By Leina Seeley

Before wildfire detection technology advanced, fire lookouts were the best way to spot developing fires in the forest. Fire lookouts are perched at a high elevation and occupied during fire season by the lookout. The lookout visually scans the area for lightning strikes and forest fires from the vantage point. Once a fire is spotted, they alert the closest ranger station and give local landmarks to help firefighters locate the fire quickly.

At one point, 686 lookouts were operating in Washington, but only 106 structures are left with 28 still functioning to this day. Not all of those retired lookouts are in disuse, though. Some are accessible via hikes and available for overnight stays. The fire lookouts offer primitive shelter and are a fun way to experience nature from a great viewpoint of the surrounding landscape. We compiled a list of some of Washington’s most popular fire lookouts that can be reserved or are available on a “first-come, first-served” basis.

These fire lookouts offer very sparse amenities, so check beforehand for specific details per lookout and bring what you will need to enjoy your time. Very important: no running water is available at any location so bring enough water for your stay. And as always, use extreme caution when using an open flame and pack out all trash, food and waste. Guests are also expected to clean up after themselves after their stay at the fire lookout.

Most rentals are operated by USFS, but a couple are privately owned and have a separate booking process. Nightly fees for rentals can range from $75–$150 per night. Reservations are typically made available 6 months in advance of the peak season (from mid-June to mid-October) and book up fast (like, really fast) so be ready to lock in those dates early. Each rental has different rules for the minimum or maximum length of stay and some fire lookouts ask for a key deposit that is refunded upon return. 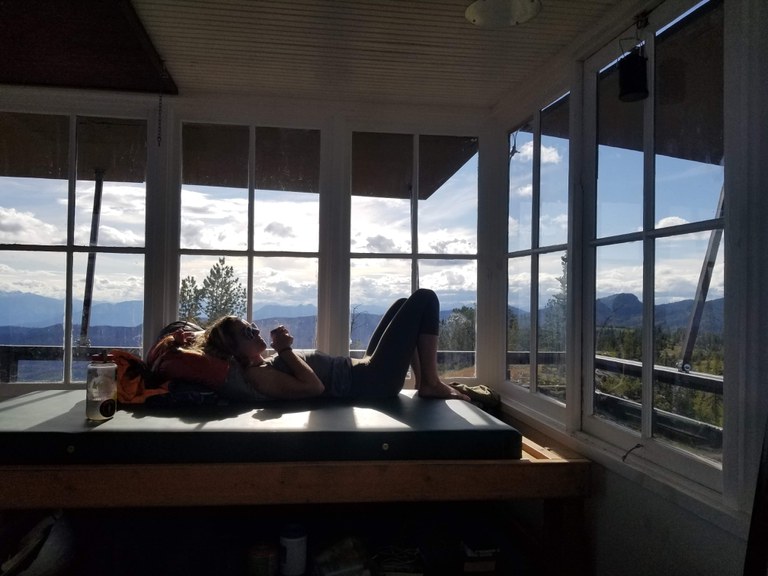 When it comes to the fire lookouts that are available on a first-come, first-served basis, it is important to gauge what your expectations are for your experience. It is very unlikely that you will have the entire lookout to yourself, so expect to share the space and potentially make new friends. Sometimes the lookout might be too crowded and you might have to hike back the same day or find an alternative campsite. Confirm ahead of time with the ranger district or the land manager if the fire lookout is open for overnight use and make sure you have the appropriate permits, if necessary, to explore the area.

Whether you reserve ahead of time or opt for the first-come, first-serve option, the unique experience of staying in a lookout will be one to remember.

Where you can stay in a fire lookout

Note that many reservable fire lookouts are reservable well in advance and book up quickly. Most lookouts on recreation.gov are reservable on a 6-month rolling basis. Check individual listings for details.

This article originally appeared in the Fall 2022 issue of Washington Trails Magazine. Support trails as a member of WTA to get your one-year subscription to the magazine.