Southwest Washington is a bright destination for hikes, craft beer and plenty of stunning ocean views | by Rachel Wood and Brandon Fralic

Even though we read the forecast, the rain caught us off guard. It wasn’t the drizzle that the coast is known for but heavy sheets of rain. We parked the car in front of the Sou’wester Lodge and Cabins and wondered if we should wait a few minutes for the rain to let up. Even in the summer, a few rainy days slip in at Long Beach— but the sun and fun are never far behind the clouds.

Founded in 1880, Long Beach was originally called Tinkerville. It was a tourist camp for Portlanders, who would travel to the mouth of the Columbia via sternwheeler. Today, it’s a favorite vacation spot, especially for families who come to enjoy the 28 miles of continuous beach— the longest stretch in the United States. Surfing, horseback riding and especially clamming can all be enjoyed on the wide stretches of sand. We came for something else, though: to hike, eat and drink some craft beer. 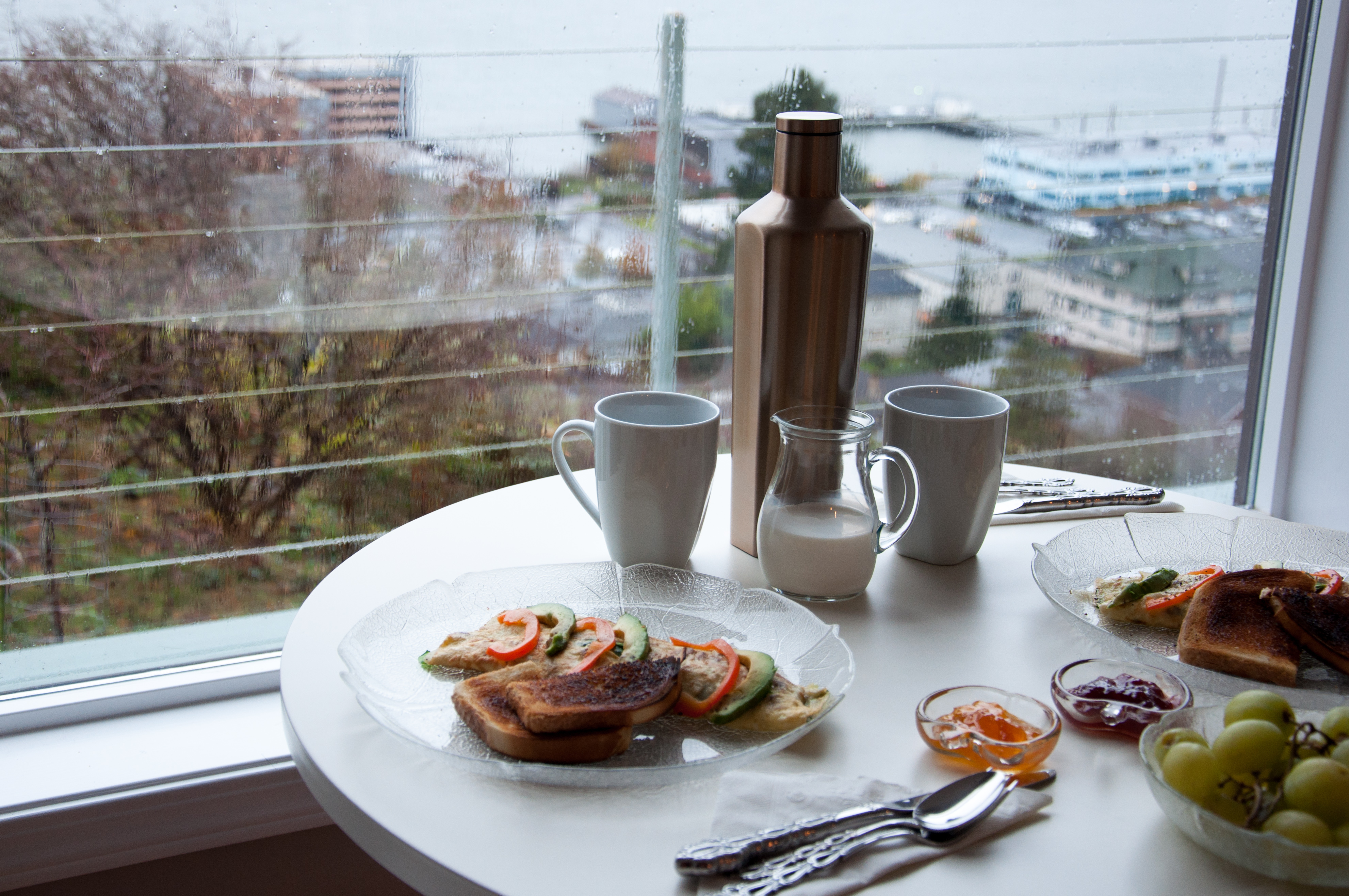 Enjoying the rain from inside the WindWater B&B in Astoria. Photo by Brandon Fralic.

Thankfully, the rain broke just long enough for us to puddle-jump our way from the car to the front office, ready to check into our vintage travel trailer. Our Vagabond trailer wasn’t quite ready for check-in, but luckily North Jetty Brewing was just down the street. We grabbed a couple of pints and cozied up next to the fireplace to pass the time watching fat drops collect on the brewery’s front window.

Once we checked into our 1950s-era trailer, we had just enough time to clean ourselves up and head next door for dinner. The Depot Restaurant was literally steps away from our trailer door. We decided to splurge a little bit at the former train depot that has been turned into a fine-dining establishment. Rachel enjoyed the 7 ounce filet mignon Steak Killian, while Brandon sampled the local seafood bounty with clams bucatini. Stuffed and satisfied, we turned in early to rest up for a day of hiking.

The next morning, after a hearty breakfast at 42nd Street Cafe, we headed over to Washington’s greatest misnomer: Cape Disappointment State Park. It simply does not live up to its name! Our first stop was North Head Lighthouse. One of two lighthouses in the park, North Head Lighthouse aids ships coming in from the north and aiming for the dangerous waters at the mouth of the Columbia River. On bridges, boardwalks and stretches of dirt trail, we had to watch our footing after the heavy rains of the night before. From the lighthouse, we enjoyed a wonderful view of rolling surf before hiking North Head Trail to McKenzie Head. But we knew if wanted to see the iconic views of crashing surf that Cape Disappointment is known for, we’d need to hit the beach.

Waikiki Beach is one of the best places for viewing the black-and-white-striped Cape Disappointment Lighthouse. Between the beach and the lighthouse, there’s a point that creates a massive surge where the waves crash, curl, spray and break. Why is this area called Waikiki Beach? Well, the wave pattern here is similar to the Hawaiian beach that shares the name. But the surfers that come to Cape Disappointment hit the waves in full wetsuits, forgoing pairs of colorful swim trunks. From our driftwood perch, we watched two surfers carve through the waves, accompanied on the curl by a harbor seal.

After exploring the Washington side of the Columbia, we drove south across the Astoria-Megler Bridge to Oregon. We planned to spend a night in Astoria, specifically to check out the growing brewery scene in the city. And there was still plenty of daylight left to sneak in another hike.

The Columbia Bar, the confluence of the Columbia River, is sometimes known by a more sinister name: the Graveyard of the Pacific. Here—at the mouth of the mighty Columbia—some 2,000 ships have been lost over the years. One of the most famous is the Peter Iredale—due largely to the fact that the skeletal hull of the ship is accessible to the public. While it’s easy enough to drive out to the ship, we decided to hike. We parked at the placid Coffenbury Lake, hiking around it before connecting to a footpath out to the shore. The Wreck of the Peter Iredale is a popular spot at sunset, the black silhouette of its rusted iron appearing like a beached whale against the backdrop of the Pacific.

Long Beach is surrounded by numerous State Parks and towns to explore. Graphic by Lisa Holmes.

We checked in at the Windwater B&B for the evening before heading into downtown Astoria to grab dinner and beers at the award-winning Fort George Brewing. After a day of travel and hiking, the pub grub, brews and comfortable Windwater suite were incredibly welcome.

In the morning our hosts brought in a made-to-order omelet breakfast—along with some excellent coffee. Begrudgingly, we packed up to head home from our weekend getaway. On the way out of town, we stopped at the fascinating Columbia River Maritime Museum to learn more about Astoria’s famed bar pilots, shipwrecks and seafaring history. Finally, we rounded out our trip with lunch at Buoy Brewing. From our table overlooking the Columbia, we toasted our sometimes-rainy-but-always-bright weekend away on the coast.

Fort Stevens State Park: This northern Oregon Coast state park is a hot spot for beachgoers. Why? Shipwrecks. In addition to its year round campground, historic military sites and 6 miles of hiking trails, the park is home to one of the most accessible shipwrecks in the Graveyard of the Pacific. For a 3.3-mile lollipop loop, start at Coffenbury Lake and take the 2.4-mile trail around it. Back at the parking lot, connect to the paved Sunset Trail to walk out to the wreck of the Peter Iredale on the beach.

Cape Disappointment State Park: This 1,882-acre park offers 8 miles of hiking trails. For a short and easy outing, drive to the end of North Head Lighthouse Road and walk the half-mile Lighthouse Keepers Loop to North Head Lighthouse atop windswept cliffs. For a longer hike, from the same parking lot, check out the North Head Trail. Head south on the trail through coastal Sitka spruce forest to reach the McKenzie Head Trailhead on Fort Canby Road. Turn around here for 3 miles roundtrip, or extend your hike with a quarter-mile climb up McKenzie Head to check out the World War II-era Battery 247 and enjoy ocean views.

The Sou’wester Lodge and Cabins: Offering vintage travel trailers, the Sou’wester straddles the line between traditional camping and glamping. Lodge rooms, cabins and RV or tent sites are also available at this centrally located bohemian retreat near the beach.

Windwater B&B: Seeking something more luxurious? Windwater B&B is the natural choice for contemporary comforts in Astoria, from heated towels and a fireplace to soaring Columbia River views. The charming owners deliver fresh breakfast with a generous helping of hospitality in the morning.

Depot Restaurant: Experience casual fine dining in Long Beach—from inside a former train depot. This farm-to-table restaurant specializes in steak and seafood. Call ahead to reserve the chef’s table for a special occasion.

North Jetty Brewing: This brewery serves up sea-inspired brews, from Cape D. IPA to the creamy Discovery Coast Coffee Milk Stout. No kitchen, but outside food is welcome and Stanley’s Grill food truck serves a variety of goodies outside.

42nd Street Cafe: For sit-down food service, head across the street to 42nd Street Cafe, which serves breakfast, lunch and dinner. Stop by in the morning for melt-in-your-mouth New Orleans-style beignets and the house-smoked salmon scramble.

Fort George Brewing: Housed in a massive 1920s-era warehouse, this Astoria brewery cranks out an overwhelming variety of brews. Enjoy traditional pub grub in the public house, or head to the upstairs pizza parlor for savory pies from the Oregon oak-fueled woodstone oven.

Buoy Brewing: Stop by this cannery-turnedbrewery on the Columbia River. Watch (and listen) for seals barking below as you cross the docks to enter. Inside, lagers are king. The beer pairs well with the locally sourced menu and river views.