A change in the river's course has put the iconic 80-year-old structure's future into question.

Olympic National Park officials recently released ground and aerial photographs of Enchanted Valley in the southwestern corner of the park. The images show that the main channel of the East Fork Quinault River has shifted and is flowing within several feet of the historic Enchanted Valley Chalet.

Located in the Quinault Valley, 13 miles from the Graves Creek trailhead, the chalet was built by Quinault Valley residents in the early 1930s, prior to the establishment of Olympic National Park, and served as a lodge for hikers and equestrians.

Near the chalet, the East Fork is constantly subject to storms, fallen trees, rockslides and erosion, often causing the channel to migrate across the wide, flat floor of the valley.

"We are very concerned about the future of the chalet..." 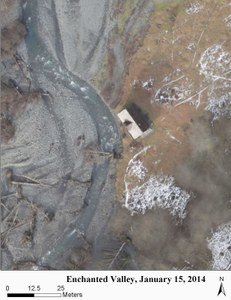 The river has gotten closer since the National Park Service shot this aerial view on Jan 15 2014.

“We are very concerned about the future of the chalet, as well as possible impacts to the river,” said Olympic National Park Superintendent Sarah Creachbaum. “The chalet has a great deal of local and regional significance and is well-known to anyone who’s traveled to Enchanted Valley in the past 80 years.”

Keeping a close eye on the river

Park staff are currently working to fully assess the situation and determine the best course of action—which could be limited due to the chalet’s location in a remote section of the Olympic Wilderness.

A routine monitoring program is keeping park officials abreast of the river’s position and the chalet’s situation.

“The river was right against the bank beside the chalet,” conveyed David Baxter, a WTA trip reporter, following a January hike up Enchanted Valley. “Hopefully it can hold out awhile longer.”

No longer a backcountry retreat, the chalet is used as a ranger station and emergency shelter for hikers. The chalet was added to the National Register of Historic Places in 2007.

This article originally appeared in the Mar+Apr 2014 issue of Washington Trails magazine. Join WTA to get your subscription.

The Chalet is now undercut. If you haven't seen it, you should head there immediately, or sooner.