Exactly 52 years ago today, Washington Trails Association began with the publication of Signpost magazine by Louise Marshall. The first issue was just two-and-a-half pages and printed on a spirit duplicator, a fussy but inexpensive method of printing. Louise printed just 200 copies. The newsletter was a mixture of trip reports, trail updates and calls for hikers and backpackers to speak up for trails.

What started as a small newsletter for hikers has grown into a diverse community speaking out for trails and wildlands. While some aspects of hiking have been revolutionized, our core values have remained the same and the influence of Louise’s vision has spanned generations.

In honor of the anniversary, we re-read the earliest editions of Signpost magazine to see what’s changed, and what’s stayed the same. 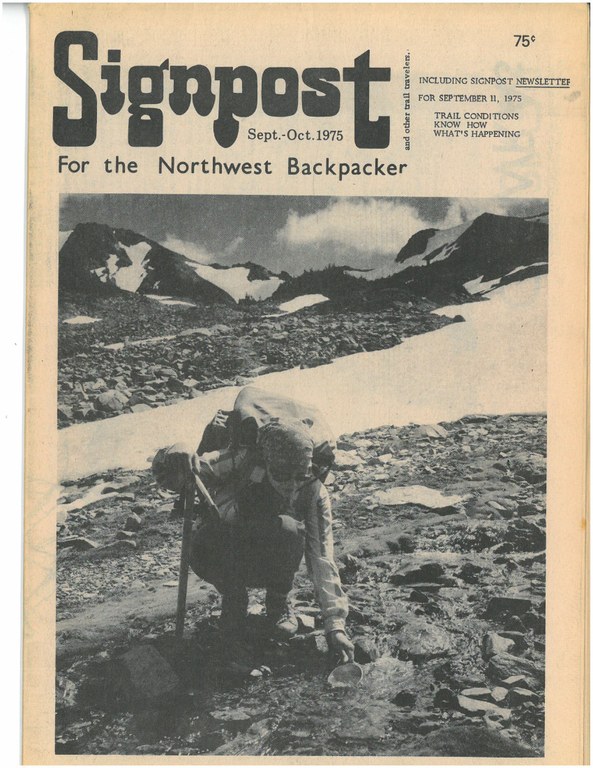 Protecting Trails since the beginning

Since our beginning, a large part of our mission at WTA has been to enhance and protect hiking trails across the state. This advocacy has always been a cornerstone of our values, and examples of our work to protect trails from more than 50 years ago can still be seen today.

In the first edition of Signpost, Louise Marshall looked to grab the attention of Goat Lake backpackers. She wrote about how the trail had been moved “again,” warning hikers they'd have to navigate debris from the logging and mining operations. She encouraged readers to “Please defend Goat Lake’s recreational, historic and scenic values by writing to Robert E. Taylor, District Ranger, Mt. Baker National Forest.”

By the third issue, only two months later, Signpost published an update about “the Goat Lake situation.” It highlighted that trees had been cleared to create a route for the trail, two new garbage pits had been installed and toilets had been repaired.

The district ranger at the time, Robert Taylor, was interested in “reclaiming the old Elliott Creek Logging Road, or whatever parts of it can be found.” Today, many of the trip reports you’ll read for Goat Lake refer to the “old” logging road at the onset of the hike. We were excited to read how work so many years ago is still being enjoyed regularly by hikers today. 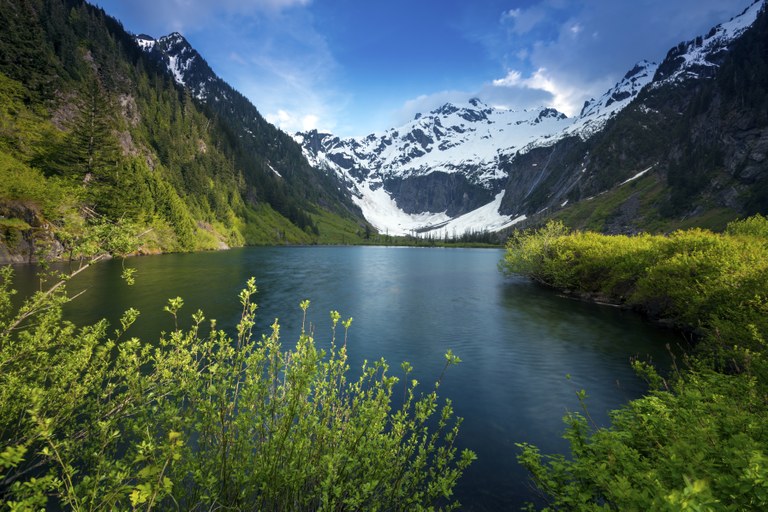 WTA continues to advocate for the preservation of trails all across the state and is constantly searching for passionate hikers to help protect our wildlands, just as Louise and Robert did in 1966.

Since Louise founded Signpost, we’ve added a trail maintenance program, which is now in its 25th year. And in recent years, we’ve been working on our Lost Trails Found campaign to reclaim and protect trails that have been taken back by nature in recent decades due to steep declines in funding for our public lands.

If you'd like to advocate for the trails you love, sign up for our Trail Action Network.

If you think the popularity of iconic trails is a new challenge, think again. Snow Lake in Alpine Lakes Wilderness has been one of Western Washington’s most popular trails for decades, something we were reminded of while reading Signpost.

On Sept. 30, 1966, the fifth edition of Signpost Magazine printed a trail report from Aug. 27-28 of the same year. Dick Wetmore, who took the trip with 10 companions, relayed this message:

“We got rained on the way in, but next day was nice. We camped at Snow Lake, which is pretty heavily used and showing it.”

On Aug 28, 2016, 50 years to the day after Dick’s trip, a WTA contributor known as “Lazy Boots” reported that Snow Lake remains an extremely attractive destination for a growing population of hikers:

“We arrived at the parking lot in Alpental to literally 150 cars. The upper lot was full, we grabbed the last spot, cars were pulling into the lower lot.” 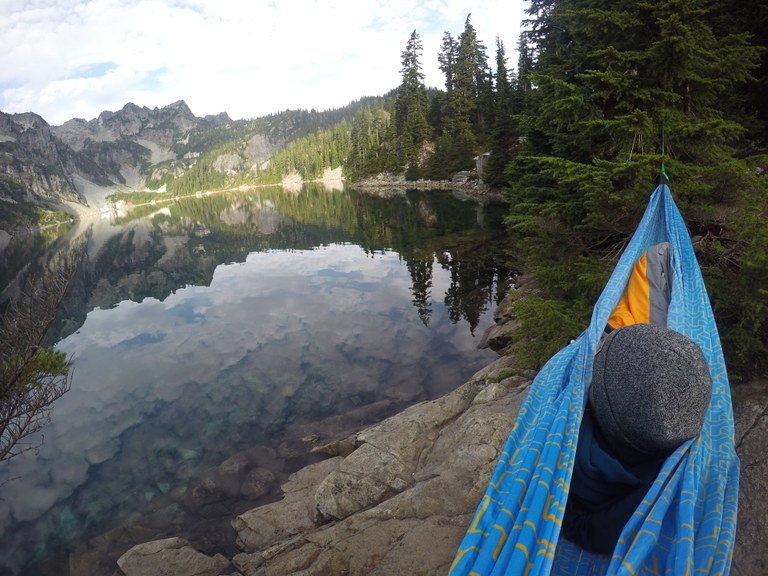 Situated close to Seattle and towns on the east side of the Cascades, the translucent depths of Snow Lake are tucked 2,000 feet below the summit of Chair Peak. Additionally, its accessibility and beauty have kept the Snow Lake trail a favorite for both day hikers and backpackers alike.

It’s a good reminder that our work to protect the trails we already have, and to create new trails, is increasingly important as more hikers discover the joys of time on trail. 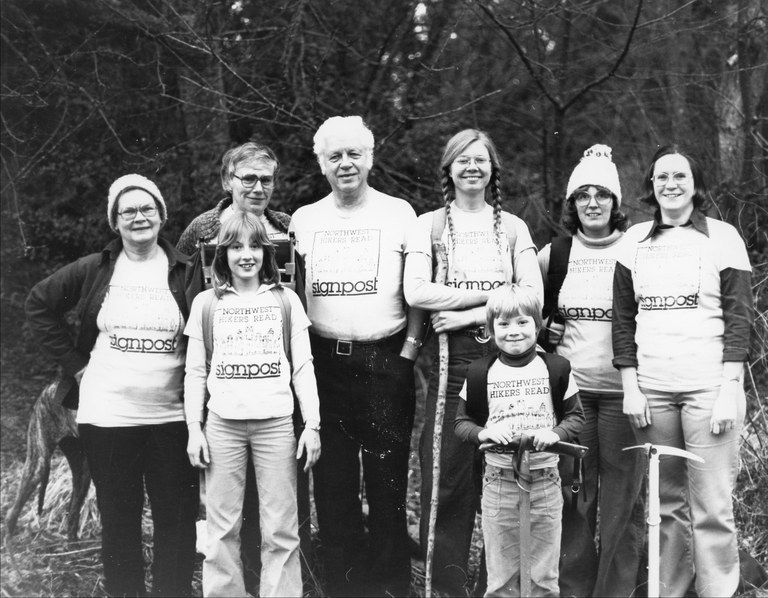 We weren’t surprised to see that we’ve been talking about the Ten Essentials basically since our beginning. Signpost began as an offshoot of The Mountaineers activities, and Louise listed the Ten Essentials in just the second issue.

To prevent emergencies and respond positively should one occur:

One obvious difference is that now the Ten Essentials has been broken down into two categories — for emergencies and spending the night. Secondly, the items on the list have been expanded on. For example: where you found sunglasses, matches, fire starter, flashlight, map and compass in Edition One, you now have sun protection (“sunglasses, sun protective clothes, sunscreen”), fire (“disposable butane lighter instead of matches, stove”), headlamp and navigation (“map, altimeter, compass, GPS app, PLBs and satellite communicators”).

Additionally, there are also some interesting omissions and replacements. In Louise’s list, we noticed that there is no mention of water or shelter or water. Was perhaps a sleeping bag bivy deemed enough for an overnight backcountry excursion in the 1960s?

Safety has always been important to us, and continues to be. Now, though, we have many more tools to share safety information.

Helping A Community hike and protect Trails since 1966

“I hereby set up this SIGNPOST for backpackers, that all who pass this way may be guided by the experience of those who have gone ahead,” she wrote.

We hope that, 50 years from now, when hikers look back, they’ll learn that the trails they love to hike are still there because of work we’ve done today.