Fourteen years ago, access to the Suiattle River Valley was washed away by record floods. Access to over 100 miles of trail was lost, and the Pacific Crest Trail was left fractured. In 2014, progress was made to reopen access to seven popular trails, but a critical access point to the PCT was left hanging in uncertainty | by Rachel Wendling

October 17, 2003. Colossal storms and nearly a foot of rain poured through the Suiattle River Valley. The surging floodwaters destroyed roads, bulldozed bridges and nearly obliterated a key access point to the Glacier Peak Wilderness. River crossings became dangerous feats, trails became hidden by brush and campsites were left deserted. A section of the Pacific Crest Trail (PCT) was wiped out, and rendered impassable to hikers.

On election day November 2006, a second flood swept through the valley, eating away another 30 feet from the river bank and widening what felt like an insurmountable gap between the existing Boundary Bridge and the recreation opportunities that lay beyond it. In total, 7 bridges across the Suiattle River were lost to flooding in the mid-2000's. 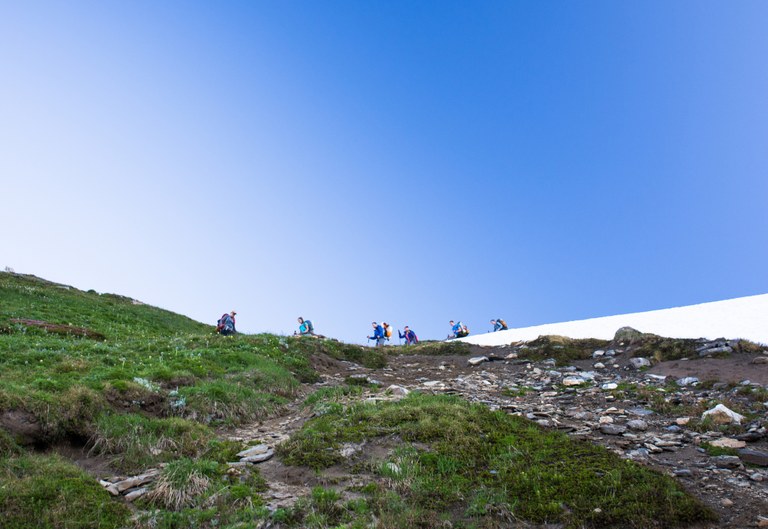 The aftermath of two severe floods left almost an entire wilderness out of reach to most hikers. With the Suiattle River Road impassable to traffic and the Pacific Crest Trail left in pieces, the area became deserted.

Section K of the Pacific Crest Trail, spanning from Steven's Pass to Rainy Pass, is often considered one the toughest and one of the most breathtaking sections, due in no small part to the Glacier Peak Wilderness.

"Tucked into snowfields and cinder cones, it's the kind of place you only expect to find in poetry and kids' books" —Joey Smith

At over 565,000 acres, the Glacier Peak Wilderness is known for its rugged peaks, forested streams, and abundance of wildlife. The prominent Glacier Peak stands at 10,541 feet and is home to more active glaciers than any other place in the contiguous United States.

The Pacific Crest Trail travels 60-miles through the Wilderness, encompassing some of it's most remote reaches. From the west, the 10.8 mile Suiattle River Trail and the 7.4 mile Milk Creek Trail are some of the few direct access points to this section of the trail.

Without the bridges, PCT thru-hikers were required to take a 45-mile detour to reconnect north of the Suiattle, and the chance for a family-friendly day hike or a multi-night Glacier Peak loop hike became non-existent.

Eleven years after the flood of ‘03, the Suiattle River Road officially reopened on October 25, 2014 thanks to the joint effort of federal, local and tribal government as well as local environmental groups. An expansion to the original Boundary Bridge was established over the Suiattle River in 2010, allowing for much needed work to continue along the remainder of the road.

Since the reopening, hikers have regained easy access to 7 popular trails in the Glacier Peak Wilderness as well as two official campsites and a myriad of dispersed camping opportunities. In total, the new road recovered over 120 miles of trail.

With regained road access into the valley, a new PCT bridge was added across the Suiattle River, allowing thru-hikers to complete their journey uninhibited and stock and trail workers to perform some much needed maintenance.

Despite major victories within the Suiattle River Valley, the Milk Creek Trail; the second major access route to the PCT and a section of the classic 30-mile Dolly Vista Loop, still remains inaccessible to hikers. The original bridge spanning the Suiattle River along the Milk Creek trail was washed downstream by the violent floodwaters of 2003. Talks of bridge replacement were further thwarted by the second round of flooding in 2006.

The lack of the Milk Creek Bridge brings with it, the loss of a critical access point to the Glacier Peak Wilderness as well as an entry point for stock, resupply and trail crews to converge with the PCT. Without the Milk Creek bridge, southern portions of the PCT through Glacier Peak remain difficult to reach and are unable to receive the amount of maintenance they require.

Wilderness & Trails Coordinator for the Mount Baker-Snoqualmie National Forest, Gary Paull, stands in front of the remnants of the Milk Creek bridge. Photo by Britt Lê.

Not only did the Milk Creek trail provide access, it was also well-loved as a family friendly route with towering old growth, easy-to-reach flower meadows and impressive views of Glacier Peak.

Trip reporter Putz-in-Boots traveled the Milk Creek trail in 2003, noting “I honestly don't know what is the best part of the trail...maybe it's the centuries old 'old growth' forest, or maybe the beginnings of a huge display of wildflowers. I think I truly have found one of the most beautiful stretches of trail.”

"I think I truly have found one of the most beautiful stretches of trail.” —Putz-in-Boots

Despite the trail's current condition, several brave hikers have attempted to venture past the washout site by way of treacherous log crossings, only to be met with an even less forgiving swath of forest.

Trip reporter Miker endured the river crossing in 2015, retelling what was encountered afterwards, “Impossible to see the trail, but we could feel the well-worn trough until it turned to enter a sizable grove composed of Avalanche Alder, Vine Maple and Red Osier Dogwood. It was at this point that life as we knew it ended. We completely lost the trail in that thicket even though the GPS tracking device showed us to be right on it, and it probably took a half an hour to go about 200 yards.”

With 15 years of trail maintenance backlog, the Milk Creek trail has become almost unrecognizable from its former self. Brush reaching up to five feet have obscured the remnants of what was once a bustling route. Blowdowns and slides cause even the most prepared hikers to feel like they’ve been led astray.

Without a replacement bridge built soon, conditions along the Milk Creek route will continue to deteriorate further. With the help of WTA's Lost Trails Found campaign, we will continue to advocate for funding to replace the critical bridge over the Suiattle, as well as provide boots-on-the-ground assistance in the form of volunteer trail work across the Suiattle Valley.