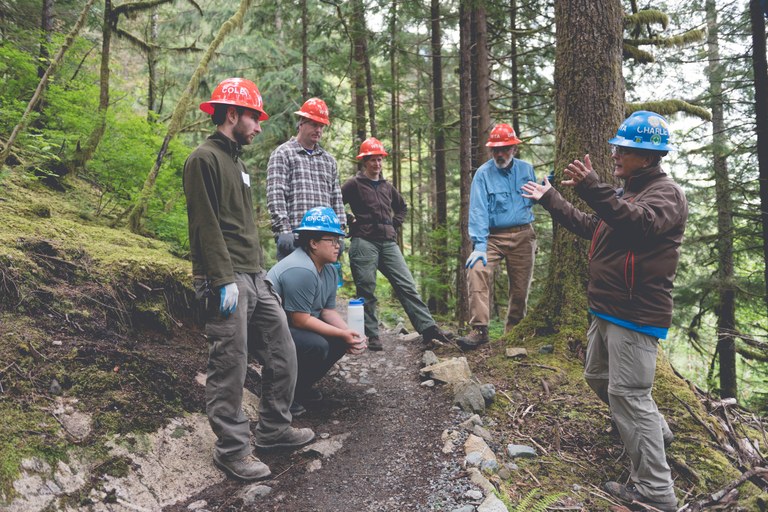 Backslope: The excavated bank on the uphill side of a trail tread.

Berm: The raised outside edge of a trail. Sometimes this needs to be removed to allow water to drain.

Blowdown: A fallen tree across the trail.

Borrow: Fill material taken from a site other than the trailway excavation. Good borrow pits can be found beneath root balls from fallen trees.

Bucking: Sawing a fallen or horizontal log to clear it from the trail.

Bull rail: short rails on the either side of a bridge that keep stock’s hooves from sliding off the bridge.

Clearing limits: The height and width from which brush and limbs must be cleared on all sides of the trail. This is different depending on the user group (e.g. a horse trail has bigger clearing limits, than one that's solely for hikers).

Culvert: A drainage structure, usually a pipe, that passes beneath a trail to allow water to flow beneath the trail. Culverts may be metal, plastic or even concrete. On trail these are usually installed on small creeks and drainages. Culverts can also be fashioned from wood or rock.

Decking: Flat, milled lumber attached to the stringers of a bridge. The travelling surface of the bridge.

Drain dip: A depression built into the trail to water off the trail.

Duff: The fluffy material that makes up the top layer of the forest floor, consisting of organic matter such as needles, leaves, twigs, etc.

Fill: Gravel or soil used to fill gaps in trails or raise the trail tread.

Full bench cut: cutting the full width of the tread into the hill side in new trail construction.

Grade: How steep a trail is. The percent slope of trail measured as feet rise divided by 100 feet run.

Grubbing: Digging out roots and other organic material. 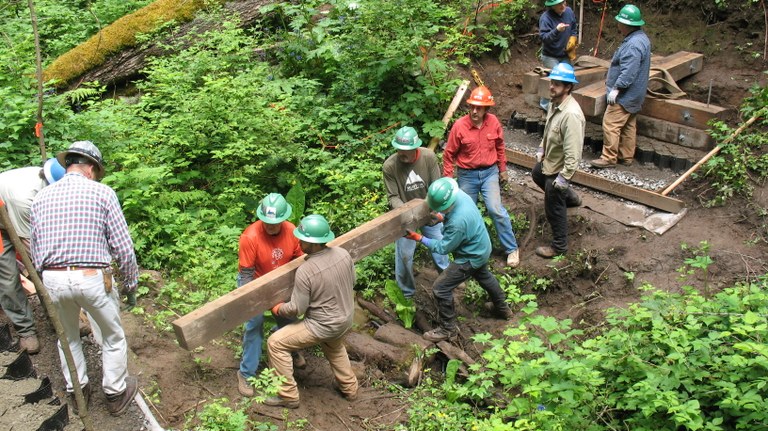 Inside edge: On a hillside trail this is the uphill side of the trail.

Inslope: When the inside edge of the trail is lower than the outside edge.

Mineral soil: Soil that has little or no organic matter. The good soil for trail building because it packs down solid and won't break down like organic soil.

Outside edge: On a hillside trail this is the down-hill side of the trail.

Outslope: When the outside edge of a trail is lower than the inside edge. This is what we want in most trails because it promotes drainage.

Puncheon: A boardwalk-type bridge often built through boggy areas. This structure is different from a bridge in that it doesn't span a void, but rather raises the trail over the ground, usually through wetlands or similar areas.

Settling basin: A deep rock lined pit placed in front of a culvert to allow silt to settle out before entering the culvert.

Sill: Part of a bridge; logs that sit on the ground and support perpendicular stringers.

Slough: Silt and organic debris that have slid down onto the trail. This can cause further damage to the tread so trail work will often involve the removal of this.

Stob: The stubby branch left behind when a branch is cut off the main stem. It's a good idea to remove these, so they don't pose a danger for other hikers.

Stringer: A beam that runs the length of a bridge and carries the load of the bridge.

Switchback: A sharp reversal in the direction of the trail, allowing the tread to maintain a reasonable grade as it climbs a steep hillside.

Tread: The travel surface of the trail.

Turnpike: A structure used to carry a trail across ground that is usually saturated with water. Logs or rocks embedded along the sides of the tread hold fill material in place to form an elevated travel surface.

To learn even more about trail work, check out this list of tools you'll encounter out on trail, this list of annual maintenance projects and this list of trail construction projects. 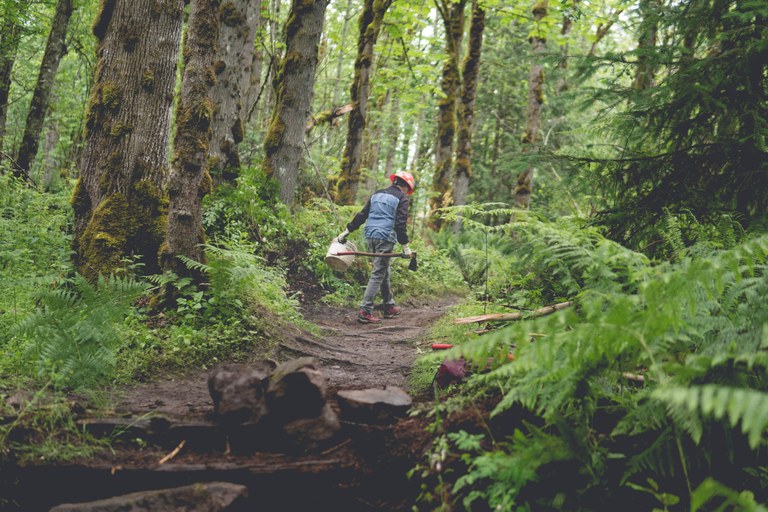