Battle Ground Lake State Park is a local favorite, particularly good for families with its short loop around the lake and the playground. Continue reading

15 Trip Reports for this trail

Email
The trail around the Lower Lake. Photo by Ryan Ojerio.

Battle Ground State Park in southwest Washington has been likened to a miniature version of Crater Lake National Park. This particular crater formed when a steam explosion ripped away this small volcano’s top, leaving behind a bean-shaped depression (maar). Over time, the void filled with water and created the existing lake.

The 280-acre park around the crater offers hiking, riding, fishing and camping. One of the most interesting trails is the Lower Lake Trail, which encircles the mysterious lake and allows access to its secrets.

The trail starts at the boat launch, and you can choose to travel either direction. Either way you choose, make sure to ask the locals about the lake. Though the depth of the crater may be known to science, the locals all have differing opinions on how deep the pool really is.

What they can all agree on is the existence of a beast that haunts the lake, a phantom that rarely makes itself known. Even the park rangers claim to have witnessed it surface over the years. The creature is widely accepted to be a giant sturgeon that somehow made its way into this spring-fed lake. As you tiptoe over the rocky one mile loop, keep a sharp eye out over the water—you never know what lurks just beneath the surface. If you really want to enjoy this relic from the past and witness a slice of ancient history, set out in the wee hours of the morning.

From I-5, take exit 11 and head east on State Route 502 for about 7 miles. Proceed through downtown Battle Ground, cross the railroad tracks and continue another two miles. Turn left on NE 182nd Ave, then head north (182 turns into NE Crawford). After about 1.5 miles the road turns left, crosses the railroad tracks and you come to an intersection - go straight to enter the park. You'll pass the equestrian parking area on your left, then pass the park office and turn right to park in a large parking lot near the picnic area. 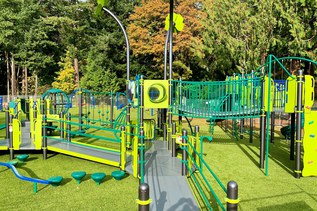 Hike and Play: Trails Near Playgrounds 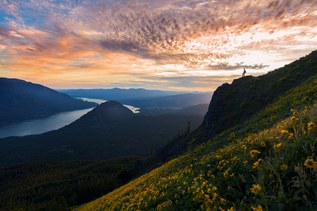