Beebe Springs Wildlife Area - Cultus Jim and Chelan Bob Loop Walk through a rocky, desert landscape with expansive views of the Columbia River. These trails are short and well built with rock steps for stable footing. This loop trail system may be started at either the Chelan Hatchery or at the loop’s top just off Highway 150 on the way into Chelan. https://www.wta.org/go-hiking/hikes/beebe-springs-wildlife-area-cultus-jim-and-chelan-bob-loop https://www.wta.org/site_images/hikes/hike-image-2021-12-21-2406935008/@@download/image/Beebe Springs Wildlife Area-Cultus Jim and Chelan Bob Loop. Kathy & Roger.jpeg

Walk through a rocky, desert landscape with expansive views of the Columbia River. These trails are short and well built with rock steps for stable footing. This loop trail system may be started at either the Chelan Hatchery or at the loop’s top just off Highway 150 on the way into Chelan. Continue reading

3 trip reports for this trail

Walk through a rocky, desert landscape with expansive views of the Columbia River. These trails are short and well built with rock steps for stable footing. This loop trail system may be started at either the Chelan Hatchery or at the loop’s top just off Highway 150 on the way into Chelan.

Parking at the fish hatchery allows for the muscles to get warmed up before tackling the numerous stairs and switchbacks crafted into the hillside. Begin the counterclockwise loop by first walking north through the Chelan Fish Hatchery operated by the Washington Fish and Wildlife Department. Once past the hatchery a wide, level gravel trail is reached.

After a short distance you’ll reach a fork in the gravel trail. The Cultus Jim trail is signed and will turn off to the right. At this point the trail becomes a single-track path winding through mature sagebrush steppe. The trail now begins to ascend in earnest up a narrow break in the cliff bands. Expertly laid native rocks make for an easy tread. In season the cliff walls echo with the descending scales of a canyon wren. Spring flowers carpet the hillside. At the top of this climb a brief gravel road walk takes you to the upper parking area.

Bearing towards the left at this parking area you will find the Chelan Bob trail, first ascending a bit more, then ultimately descending back to your car. Steep cliffs with magnificent views of the Columbia River, McNeil Canyon and the Waterville Plateau stretch out below. In winter Beebe Springs freezes into a large cascade across these rocks. Pay attention to the main trail as several social paths may lead you astray. Rock steps once again make the trail much less gravelly and easier for the descent. At a junction with the Toad Creek Loop, stay right to return to the hatchery grounds to find your car. (The Toad Creek Loop is a nice shorter, flatter hike option in this same trail network.)

Take a moment to consider the hatchery where hundreds of thousands of smolts and frys are reared every year before going into the Columbia River and alpine lakes. The state of Washington has done extensive work in the area, including across highway 97 alongside the river, restoring native plants and wildlife habitat. Though it is hard to get away from the noise and visuals of industry and the highway, there is still a strong influx of migrating birds, a bighorn family, and much other wildlife. Owing to the diverse ecosystems found here (shrub Steppe, riparian, and grasslands) the birding is excellent.

Tribute is due to the namesakes of these trails. Chelan Bob and Cultus Jim were members of the Chelan Tribe. In the late nineteenth century these men refused moving to the Colville Reservation and instead took allotments of land offered by the Federal Government through the Dawes Act. These men and their families lived in the lower Chelan Lake area all their lives.

From Wenatchee drive highway 97 north towards Okanogan. In approximately 40 miles you will cross the Columbia River on the Beebe Bridge. Immediately turn left onto SR 150 towards Chelan Falls. Travel a short distance and cross some railroad tracks. Immediately take a right-hand turn onto Beebe Fish Hatchery Road. Parking is straight ahead on the right about one quarter of a mile. There are no facilities. This gate closes at 4PM.

To get to the upper trailhead follow the directions above, but instead of turning onto the Fish Hatchery Road stay on SR 150 for another 1.5 miles, going up a long grade. The trailhead parking is on the right side of the road before you pass under power lines and before the road turns dramatically to the left. (If you reach Willmorth Drive on your right you have just passed the trailhead.) 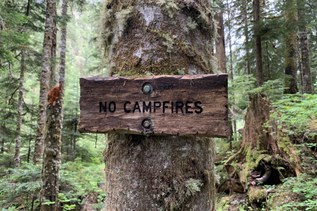