58 Trip Reports for this trail, below

With wildflowers at your feet, wander among old-growth giants on this off-the-beaten-path trail on the southeastern side of the Olympics.

Abandoned and almost forgotten, the Church Creek Trail was adopted and reopened by the Olympia Mountaineers, allowing hikers continued access to this multi-use trail in the southern portion of Olympic National Forest. From the trailhead, the path immediately enters a forest of impressive silver fir, red cedar, and Douglas-fir, where lush mosses and lichens grow underfoot.

Huckleberries and ferns line the trail, as do a wide variety of wildflowers: avalanche and fawn lilies, queen's cup, trillium, columbine, and bear grass. Church Creek, though clearly heard, remains out of sight in a deep ravine.

By way of switchbacks, the trail climbs steeply toward the South Fork Skokomish and Wynoochee River's divide. As you cross a series of streams, look for marsh-marigolds, shooting stars, pioneer violets, and fairyslippers. At about 1.5 miles, reach a decommissioned road and follow until the route rejoins the trail. The climb resumes, and after about 0.5 miles, arrive at the 3200 foot divide. Near the crest, a massive western hemlock stands guard.

Beyond the sentinel hemlock, the trail rapidly descends through silver fir and western hemlock. Beyond a cascading waterfall, the trail makes a few sweeping switchbacks and emerges at the northernmost and largest of the five Satsop Lakes. A trail wanders along the lake, passing through thick swaths of willow and salmonberry, and continues to FR 2372.

WTA Pro Tip: Spend a full weekend exploring the trails of the southeastern Olympics. Set up camp at Staircase, near Lake Cushman, then hike around Mount Ellinor, the North Fork Skokomish River, and the Black and White Lakes. 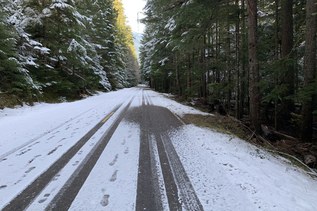