Headlee Pass and Vesper Lake Vesper Lake is squeezed, like a thumbprint in clay, deep in the saddle between the twin summits of Sperry Peak and Vesper Peak. Rarely is a lake situated so close and steeply below two summits like this–its unique setting gives you remarkably up-close (and straight-up) views of mountainous terrain. And all that comes after the former mining trail that provides incredible scenery along the way. https://www.wta.org/go-hiking/hikes/headlee-pass-and-vesper-lake https://www.wta.org/site_images/hikes/4-vesper-lake.jpg/@@download/image/4---Vesper-Lake.jpg

Vesper Lake is squeezed, like a thumbprint in clay, deep in the saddle between the twin summits of Sperry Peak and Vesper Peak. Rarely is a lake situated so close and steeply below two summits like this–its unique setting gives you remarkably up-close (and straight-up) views of mountainous terrain. And all that comes after the former mining trail that provides incredible scenery along the way. Continue reading


(21 votes) Log in to rate
Saved to
My Backpack

271 trip reports for this trail

Vesper Lake is an alpine gem, unique for being crowned by not one, but two soaring summits. If you drew lines from the tops of Vesper and Sperry Peaks to a spot halfway between them, the resulting right angle would rest in the center of the lake. While there are few finer spots for a scenic lunch than on Vesper Lake’s shore, getting here is no picnic – it is reached by a rugged miners’ trail that will make you swear it gains more than its moderate 2,700 feet…or possibly just make you swear, as you scramble up the loose rock of Headlee Pass.

The Sunrise Mine Trail 707 begins in second-growth forest and almost immediately begins a quick series of creek crossings, first by way of a log bridge, then over a snaking tree root, and finally by whatever means available over a more insistent stream. This last crossing is the south fork of the Stillaguamish River, its name the sole trace you'll encounter of the original residents of the area, the people forced to make way for homesteads, logging, and mines: the stuləgʷábš or The People of the River (which makes this final body of water “The People of the River” River). Usually a tame trickle, it can pose a serious obstacle when runoff is high. Improvised log bridges are strung up and washed away on a semi-annual basis. Check conditions (and your own comfort level); proceed accordingly.

Beyond the Stillaguamish, the trail climbs steeply up a rocky hillside through dense vegetation, until rounding a bend to the left into the dramatic valley of Wirtz Basin, a deep slot anchored by the flanks of Morningstar Peak directly ahead and by the sheer walls of Sperry Peak to the right. Throughout the basin, pikas bark their warnings and scamper out of sight in jumbled talus.

The trail heads more or less straight up valley, gently climbing at first through stunted firs. Emerging from the trees, the trail seems to peter out in a rock field. Cairns often mark the rough bootpath, but if you lose sight of them, just head straight towards the top of the valley until you find the trail again – look for an opening where it intersects with another stretch of trees. The trail switchbacks up the valley wall through large old growth before again seeming to head straight for the head of the basin.

After a long straightaway over another open rock field, a hairpin turn to the right begins a series of ever tightening zigs and zags between the walls of a steep, narrow couloir. Watch for other hikers above -- the footing is loose, and rockfall is a real risk.

The vertiginous climb peters out in a notch in the ridge, marked by a dead tree and an old weathered sign declaring: Headlee Pass 4,600 feet.

The trail now drops a short way through trees on the other side of the pass before heading in a straight line across yet another talus slope. In a third of a mile, it meets the headwaters of Vesper Creek. The trail follows the right bank of the creek, around a bend, and up a short rise to the lake.

Vesper is a relatively young lake. Older maps show it as a spot of ice, and the landscape seems to confirm that a glacier once squeezed itself into the rock here before melting away not all that long ago. The lake’s newness may also be why there’s still some debate about its name. Though most know it as “Vesper,” it is also often called “Lake Elan.”

The lake is nearly encircled by an amphitheater of granite, and there isn’t a bad seat in the house. In one direction, admire the smooth rock of Vesper Peak and its wisp of a summit. In the other, crane your neck looking straight up at Sperry. Beyond the mouth of the lake, the interior Cascades stretch off into the distance in row after row of serrated ridges.

As you depart, the surroundings offer up a final parting gift as Morningstar Peak is framed by the deep ‘V’ through which Vesper Creek exits the lake basin. From the correct angle, the peak is reflected in the creek’s surface where it flattens out between a jumble of bleached boulders.

A BRIEF HISTORY OF THE AREA

Why is the trail called the Sunrise Mine Trail and not, say, the Vesper Lake trail?

The first European arrivals to beat a path into the landscape were after minerals, not mountains or lakes. Its original destination was a mining claim staked by a group of three miners led by Thomas E. Headlee, whose name is still imposed on the rugged pass you cross on your way to and from the lake. Headlee, a lawyer by trade, would go on to be mayor of the city of Everett in the early 1900s.

The Sunrise Mine fared much better than most nearby mining claims. A climbing party from The Mountaineers that wandered through here in 1918 reported it still in operation, long after nearby Monte Cristo had gone from boom to resolute bust. In fact, so promising was the Sunrise Mine that a Canadian company tried to get it going again in the 1970s, exploring every which way to reach the metals beneath Vesper Peak — from the north, from the south, even underground through miles of rock if need be. The opening of one of their abandoned mine shafts — now blocked off — is visible to the keen-eyed in Wirtz Basin. Much of the area, including Vesper Lake, Sperry and a large portion of Vesper Peak, not only fall outside of protected wilderness, but also the boundaries of the National Forest. The area may always be in some sense an unrealized mining claim.

Ironically, one of the main things that prevented its realization was the threat of lawsuit from the city once headed by Thomas Headlee himself, a city that owes its very existence to its role as the terminus of the rail line built to move the metals mined in Monte Cristo. When the plans to mine Vesper from the south were floated in the 70’s, Everett stepped in to protect its watershed in the Sultan Basin.

For those who love the scenery for its own sake, it’s a relief that this place, subdued by miners and unprotected by wilderness or park, is left by default to be the domain of hikers and climbers. Hard to say what Headlee — mayor, lawyer, prospector — would have thought of that; but as you return through Headlee Pass on your way out, you might give a nod to all three of his professions for creating the path that guided your way and then for incidentally preserving such a remarkable spot.

From I-5, take exit 194 for Highway 2 towards Snohomish/Wenatchee. Drive for nearly 2 miles, then take the left exit for WA-204 E towards Lake Stevens for 2.5 miles. Turn left onto WA-9 N and drive for 1.7 miles, then turn right onto WA-92 E. After 1.5 miles on this road, arrive at a traffic circle and take the second exit to stay on WA-92 E.

After nearly 6 miles, arrive at a second traffic circle and take the second exit onto Quarry Road. Proceed through two more traffic circles, always staying on Quarry Road, before arriving at an intersection, where you will turn left onto the Mountain Loop Highway (Hwy 530). Drive for 27.5 miles and then make a right onto Forest Road 4065. Drive about 2.5 miles to the end of this road to the trailhead. 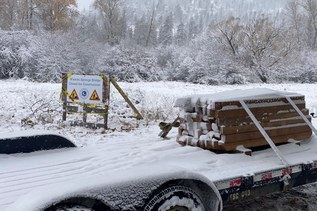