Skip to content
Woodard Bay Conservation Area With five miles of shoreline in South Puget Sound, the Woodard Bay Conservation Area includes forests, wetlands of freshwater, as well as historic and cultural resources that are a valuable diversion in the area. https://www.wta.org/go-hiking/hikes/woodard-bay-conservation-area https://www.wta.org/site_images/hikes/woodard-bay-conservation-area_ajbelfair.jpeg/@@download/image/woodard bay conservation area_ajbelfair.jpeg

45 Trip Reports for this trail, below

The Woodard Bay Natural Resources Conservation Area was one of the first in Washington state, designated in 1987.

This wildlife sanctuary is just minutes from downtown Olympia, featuring an 800 acre site that protects habitat for marine shoreline animals along five miles of shoreline in South Puget Sound. In addition, it is home to a maturing second growth forest, protected from logging activities.

After parking by a seasonal boat-launch, walk down the old road to this habitat-protected area. Turn left about 100 feet from the beginning of the road to take a winding, forested 1.5 mile loop trail which rejoins the road just a little farther down or continue on the road to get to the viewpoint.

Along the road, watch for a variety of young native trees planted by conservation groups that have worked on the site. After three-quarters of a mile,the mostly-unused road stops at a sheltered picnic area. Take a moment to sit and read the signs to learn about the area’s natural history.

From here, choose to turn left or right to look out over either side of Woodard Bay’s little peninsula. To the right is a small southeast-facing lookout with a couple of sturdy benches. To the left on the northern side of the peninsula, admire the old railroad track pier that was once used to transfer logs on their way to mills 90 miles to the North.

Now the dilapidated pier is home to a colony of yuma myotis bats, and thousands of pregnant females aggregate at the pier each spring to give birth. Although this is a seemingly perfect habitat for the bats, the old pier was treated with creosote, which contains chemicals that could harm the wetlands and shoreline ecosystem.

Washington State DNR is currently working to keep the bats’ habitat while getting rid of the chemicals, and half the pier has been removed to protect the area. Woodard Bay is home to another animal, too: harbor seals. The old log booms are now used as a haul-out site for seals -- a place for them to hang out, warm up, and relax out of the water. Most importantly, this protected area provides a place where the seals can give birth each summer. The seals share their old log booms with purple martins, which nest in boxes attached to the log booms.

History of the area: The site is valuable anthropologically, as well, with a rich and varied human history, including Native Americans, early settlers, and the logging and shellfish industries.

The first people to settle the area were the Woodard family. They arrived in 1853, farmed the land, and built a house. As more settlers pushed into the region during the 19th century, Washington Territorial Governor Isaac Stevens was commissioned to negotiate with tribes now known as Squaxin Island, Nisqually, Puyallup, and Muckleshoot for a treaty.

The Treaty of Medicine Creek was signed December 26, 1854. The Native Americans gave up 400,000 acres of land and agreed to live on reservations with the promise of certain rights. However, when these promises went unkept war broke out in 1855, and the Woodard family moved into Olympia.

For the next half-century ownership of this land changed many times, but in January of 1900, Frederick Weyerhaeuser and a group of lumberman bought Woodard Bay along with 900,000 acres of land. After changing ownership many times, the land was eventually sold back to the Weyerhaeuser Timber Company.

Beginning in 1928 shipments of logs were transferred at the railroad pier. Finally the business began to decline in 1979, and the Natural Resources Conservation Areas Act was passed in 1987, allowing Washington State to purchase the land for restoration.

If you still want more of this Conservation Area, drive back down Woodard Bay Road about a half mile to the Chehalis Western Trail. Starting there, follow a one mile crushed-rock (barrier free) trail that leads to a lookout point at the end. This trail is closed from March to mid-August to protect nesting birds, such as one of the most significant heron rookeries in the state.

WTA Pro Tip: Don’t disturb seal pups that are resting on the beach! Their parents appreciate it when humans observe the pups from a distance. To further minimize wildlife disturbances, dogs and bikes are not allowed. Bikes can be left at the racks near the trail's beginning.

From I-5 heading south, take Exit 109 (Martin Way Exit) towards Sleater-Kinney Road, and make a right onto Sleater-Kinney Rd NE. Travel approximately 4.5 Miles and continue as it turns into 56th Ave NE For 0.4 Miles. When you reach the "T", turn right onto Shincke Rd NE and proceed one-half mile. Turn to the left and becomes Woodard Bay Rd NE. Cross the bridge over Woodard Bay and find a parking lot on your right. 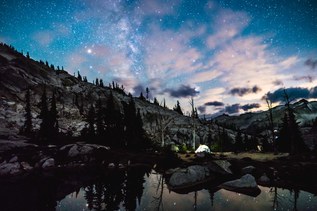