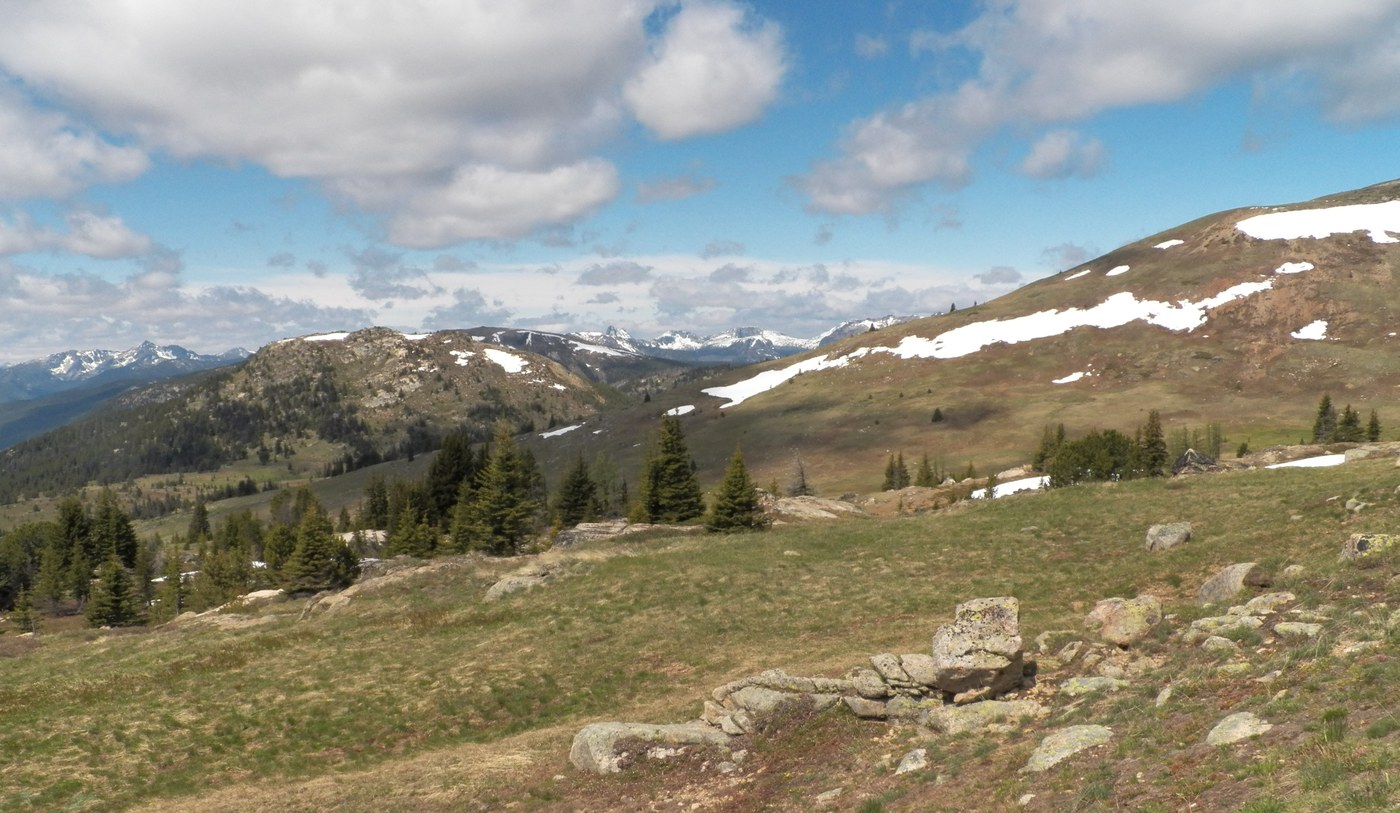 I love the Pasayten, but this can be a tough place.  Almost every time I have gone there, snowstorms have been part of the adventure.  This trip was no exception, although the snow did not stick below 7500'. Twice in August I have been hit with six inches of fresh snow.   This is the kind of place that begs for days of off-trail exploration, but anyone going there should be prepared for snow any time of the year.  Also, if you intend to be exploring far from established trails, be prepared for sudden white-out conditions.  This is a cold place and can have gloomy weather even when nearby areas are sunny.  But I love this place.

The easiest and fastest way to get to Horseshoe Basin is from the Iron Gate trailhead via trail #533.  This is not the most scenic route and since I had five days, I opted to start on the Middle Fork Toats Coulee trail #387. This avoids the notoriously rough road to the Iron Gate trailhead and much of the burned area that #533 passes through.  No one parked at the trailhead.  Trail #387 passes through stands of lodgepole pine with occasional groves of quaking aspen. Lupines and bunchberry are in bloom, plus yellow columbines and white shooting stars.  At three miles, the trail reaches a junction.  The trail to the right leads to the Iron Gate trail to Horseshoe Basin.  I went left. After an easy creek crossing, the trail starts climbing.  My original destination for the night was Windy Lake on the other side of Windy Peak, but I spent too much time on my knees photographing wildflowers so that by the time I reached trail #342 to Windy Peak, the day's sunny weather had disappeared.  The trail to this point sometimes becomes faint in grassy meadows, but never to the point of losing it altogether.  The route has been cleared of downed trees as far as Windy Lake.  There were intermittent rain showers and in keeping with the name, lots of wind.  I found a lovely meadow at 7400' with water and expansive views.  The next morning it was gray and blowing cold and it started snowing before I left camp.  The trail from this point to Windy Peak is marked "Hard to Follow" on my Green Trails map, but I found that it is well-marked with cairns and even lined with rocks in some places.  Just as I was reaching 8000', I saw an awful snowfield ahead.  I wondered if I would have to turn around.  Not only was it terribly steep, but when I got to it and poked it with my trekking pole, I found it was solid ice covered with an inch of fresh snow.  It was still snowing.  The only tracks across it were those of a deer that had crossed when it was slush.  There was a lip I couldn't see above.  Maybe if I got above that lip, the slope would be reasonable and I could cross.  There were some steep rocks to the left.  I went up. Way better than it looked.  Once over the lip, the snow ends.  There's a cairn and a flat plateau ahead.  Just as I got to the spur trail to Windy Peak, the weather eased a bit and I got five minutes of sun at the top.  Had another fifteen minutes of sun when I reached Windy Lake.  Nice campsites, but I was continuing on to Horseshoe Basin.  The way from Windy Lake to Horseshoe Basin is mostly through burned areas, recovering, with abundant wildflowers.  There are downed trees, but mostly little ones, four inches in diameter or so, not a major problem.  When the bigger ones start coming down, it will be another matter.  When I reached Sunny Pass, it was most definitely not sunny.  By the time I hit the trail to Smith Lake, it was snowing and blowing hard.  I opted not to take one of the exposed established campsites and got into the shelter of the trees.  The blustery weather continued most of the night.  But the next morning dawned clear.  The snow had not stuck at the altitude of the lake, but was on the mountaintops above 7500'.  Smith Lake is located in an area of flat meadows and groves of small trees.  The smallness of the trees adds to the sub-Arctic feel of the area, but if you look closely, you’ll observe the gnarled, bleached skeletons in the bogs of the much larger trees that once grew in the area.  Yes, here too, there had once been a forest fire, despite the damp, and yet now nature had healed and created a new landscape.  Clouds started moving in around 9 am.  I spent the day exploring Arnold Peak and beyond.  Horseshoe Basin is a boggy place and the mountaintops are no exception.  In many places it feels like you are walking on a giant sponge.  Mostly cloudy day with a few sunbreaks.  On day four, I hoped to get to Snowy Mountain on the Canadian side of the border.  It lies 5.8 miles from the top of Armstrong Mountain and is the highest peak reachable from Horseshoe Basin in one day.  Once again, the day dawned clear but clouds moved in from the west before 9 am.  It was gray by the time I reached the US-Canadian border marker on the top of Armstrong.  I hadn't seen a soul on the trail the first three days, but this being 4th of July weekend, by now there were a lot of people in the basin.  The route to Snowy Mountain is a well-defined, but circuitous ridge from Armstrong, never going below 7000'.  The way is on quite gentle slopes most of the way.  There's one steep 100' downclimb about 1.8 miles from Armstrong, but not scary.   About halfway I stopped for lunch.  The wind was blowing, I found a sheltered spot.  After about two bites, snow started to fall again.  After a few more bites, mist started to form between me and the scenery.  Being a solo hiker and having been caught before in a white-out far from camp, I decided it was time to turn around.   The snow from the previous storm had mostly melted off the peaks close to camp, but not on Snowy.  That's an even colder place.  Snowy would have to wait for another trip.

Day five also dawned clear, but by 9 am clouds had moved in again.  Most of my trip photos are pretty gloomy, but I managed to take a few sunny ones for this trip report.   I returned along the Iron Gate trail #533, hanging a right on #343 to get back to the Middle Fork Toats Coulee trail and my car.  #533 is clear of trees and I think slightly improved since the forest fire.  It used to be rather dull through lodgepole pine with no views until close to the top.  Now there are abundant flowers and views of the surrounding mountains through the dead trees.  White Labrador tea and  blue lupines are now at their peak.  I found a few white lupines there, one was lavender and even two pink ones, a rare find.  Saw the only marmot of the trip.  Columbia ground squirrels, however, are everywhere along the route.

If you visit the area, best of luck on the weather.

For this trip, I tried a new experiment for backpacker lunches.  I am sick to death of dry jerky, crackers, granola and the like.  I want something moist and close to fresh food.  A great success.  One recipe follows:

one handful of dried green cabbage

Salad dressing of your choice, I used apple vinagrette.  I have a food dehydrator for the vegetables, but have also dried vegetables without.  Works fine, just takes longer.  Put everything in a plastic bag with dressing separate.  Add water one hour before eating.  Drink the excess soaking water before adding the dressing.  Tastes fruity. 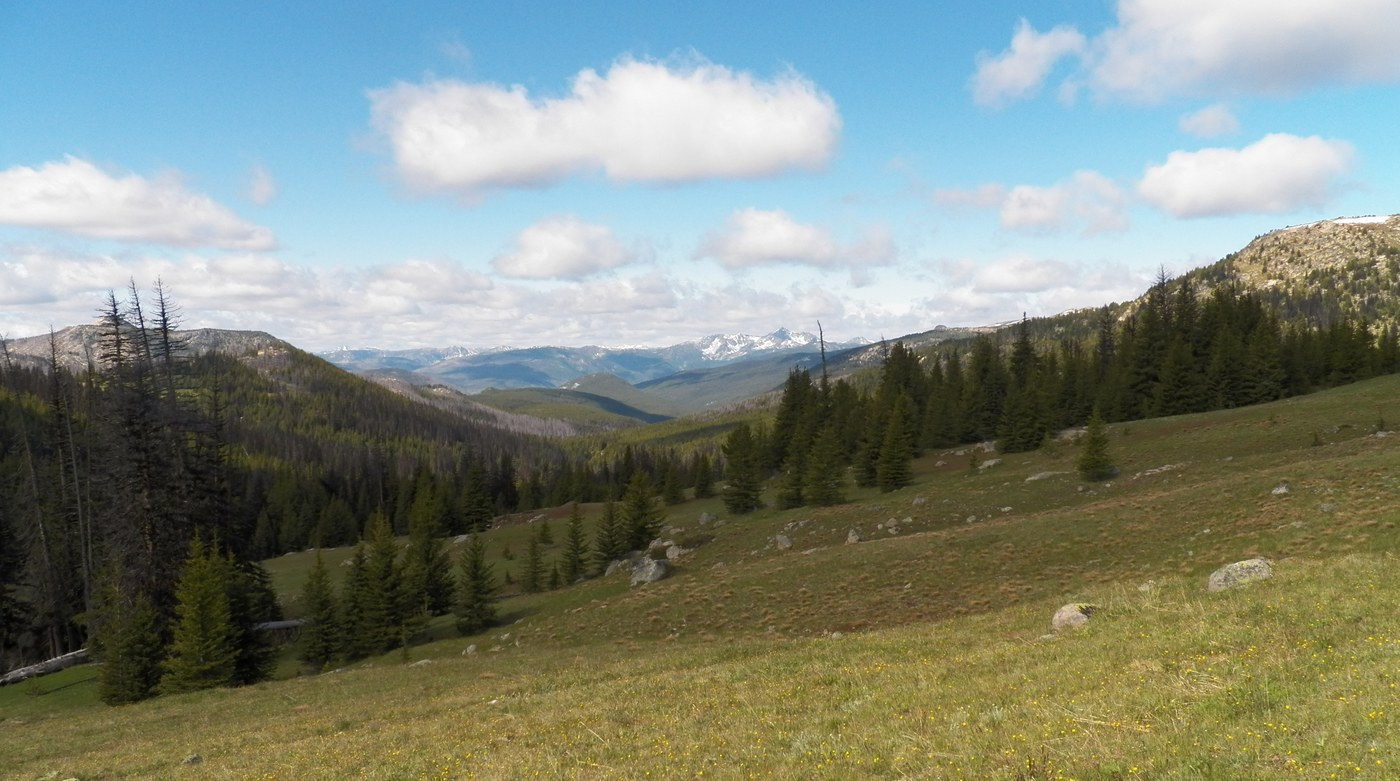 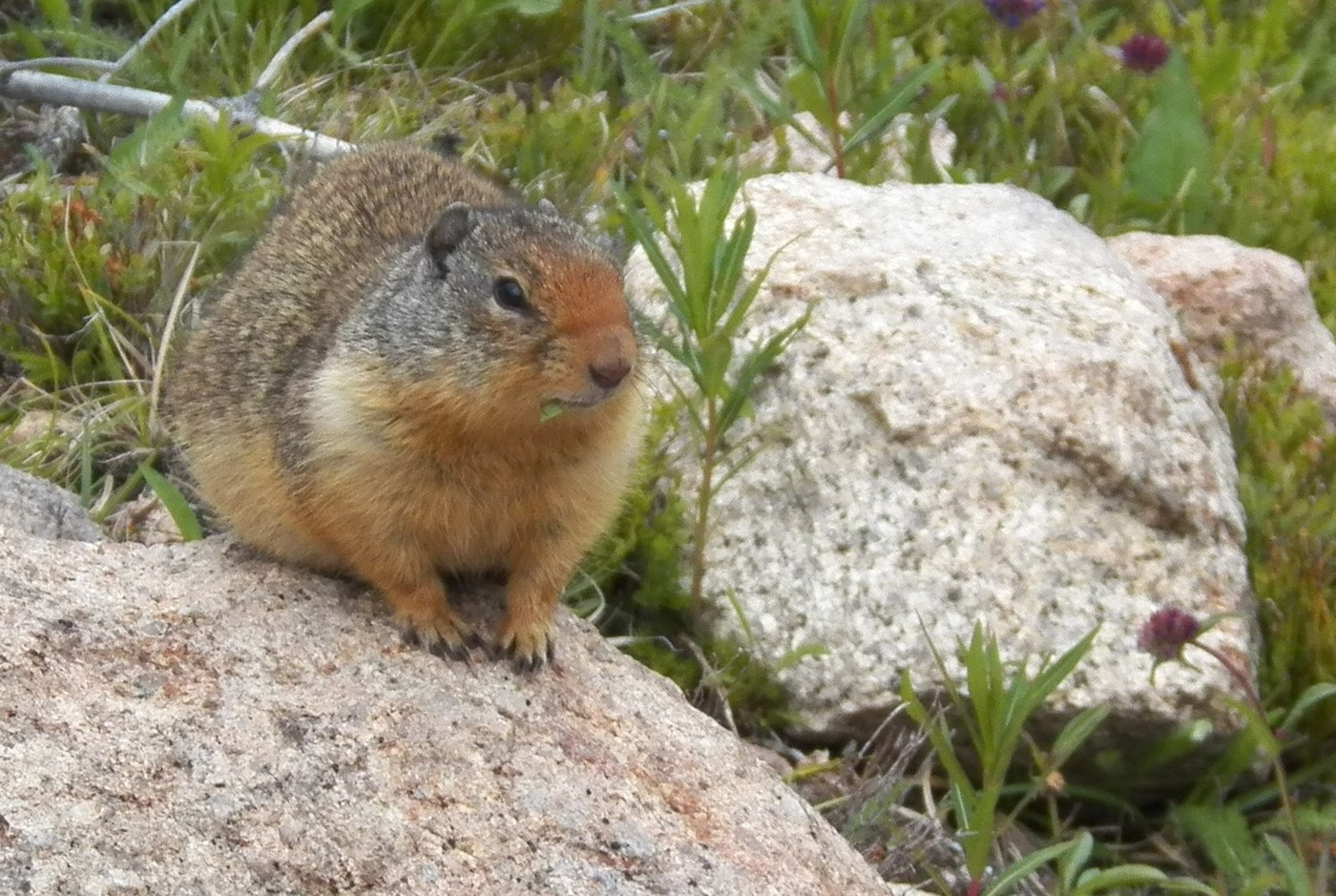 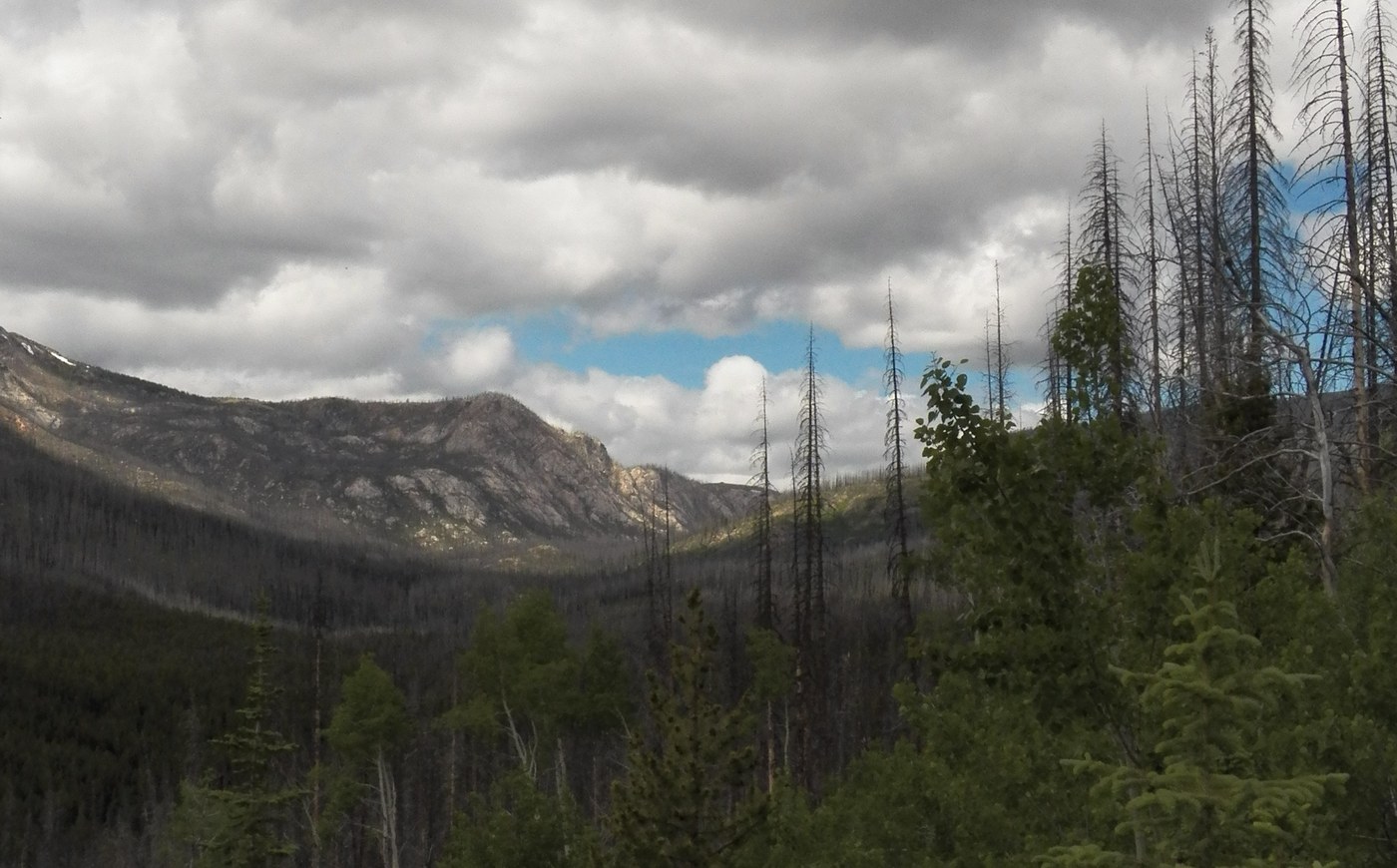