Skip to content
Coal Creek Trail, Cave Hole, East Side Trail, Tiger Mountain Trail, Rattlesnake Mountain, Palouse to Cascades Trail - Rattlesnake Lake, Pacific Crest Trail (PCT) Section I - White Pass to Snoqualmie Pass, I-90 Trail This 70 mile hike had a simple but ambitious goal: Walk from the front door of my home in Seattle all the way to the Pacific Crest Trail at Snoqualmie Pass, staying on dirt trails as much as ... https://www.wta.org/go-hiking/trip-reports/trip_report.2019-06-17.7159637272 https://www.wta.org/site_images/trip-reports/2019/tripreport.image.2019-06-17.7209481125/@@download/image/IMG_6408.jpeg

Start of the route overlooking I-90. We're going to Snoqualmie Pass. 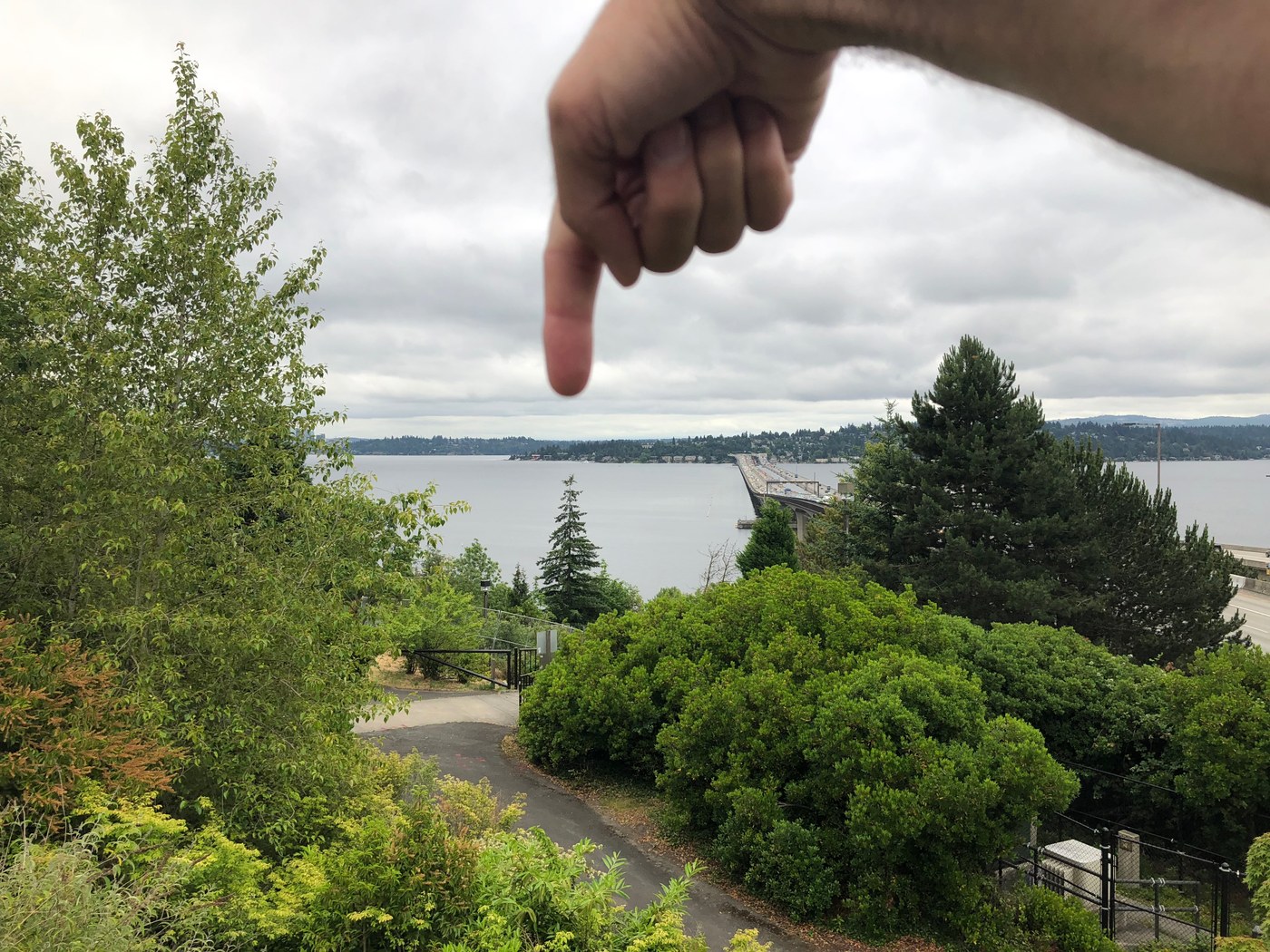 This 70 mile hike had a simple but ambitious goal: Walk from the front door of my home in Seattle all the way to the Pacific Crest Trail at Snoqualmie Pass, staying on dirt trails as much as possible. It’s a testament to the work of Washington State, the communities along the way, and organizations like the WTA that, with the exception of an initial 6 miles of sidewalk, nearly the entire route is on well-signed dirt trails.

The sidewalk in front of your house and the trail in the forest are connected. As J.R.R. Tolkein put it:

“He used often to say there was only one Road; that it was like a great river: its springs were at every doorstep, and every path was its tributary. ‘It’s a dangerous business, Frodo, going out of your door,' he used to say. ‘You step into the Road, and if you don’t keep your feet, there is no knowing where you might be swept off to. Do you realize that this is the very path that goes through Mirkwood, and that if you let it, it might take you to the Lonely Mountains or even further and to worse places?’”

After walking across Washington on the PCT a few years ago, I thought it’d be fun to connect my own front door to the PCT and the greater national trail network it’s part of. In hopes of inspiring other people to try this, I’ve linked to a Gaia route for this hike.

The linked route starts at Seattle’s I-90 overlook, where the I-90 Trail emerges from the Mt. Baker neighborhood. From that point, the trip breaks down as follows:

Mountains-to-Sound Greenway Trail / I-90 Trail. The bike and pedestrian path across Lake Washington gives you a pretty view of the lake, but the highway noise is deafening. It gets much quieter and more pleasant once you reach the parks of Mercer Island. There’s another short stretch of highway on the eastern bridge, and then you loop under I-90 and through Mercer Slough Nature Park to 118th Ave SE.

Lake Washington Loop. This short stretch of road walk near I-405 brings you to the Coal Creek Trailhead.

Coal Creek Trail. The undistinguished trailhead marker quietly represents the beginning of the dirt that will take you to the wilderness. After walking along Coal Creek for just a few minutes, the highway noise will subside behind you, and for most of the next few days you’ll be in forest. As you walk up the valley, there’s a series of trailside signs explaining the area’s coal mining history. The trail ends across the street from Cougar Mountain.

Cougar Mountain: Cave Hole Trail, Fred’s Railroad Trail, Wilderness Creek Trail, Squak Mountain Connector Trail. Cougar Mountain is the first and easiest of the Issaquah Alps to cross over. The trails are gentle — lots of families out for walks. The Connector Trail brings you down to the rather busy Renton Issaquah Road, which you’ll need to cross and walk along for just a minute.

Squak Mountain: West Access Trail and East Side Trail. The trail climbs steeply for about 1000’ of elevation gain. Squak feels like the first genuinely wild point on this trip. There aren’t any views, but the forest is pleasant enough.

Powerline to Highway 18. After Easy Tiger comes down to a road, it crosses under power lines. Leave the main road at that point, to follow an abandoned road below the powerline. The road disappears, but continues on an overgrown but still clear trail. The trail gets even more overgrown as it drops down into a gully at Deep Creek. It is possible but challenging to cross the creek on a log; wet feet might be an easier answer. The trail climbs back up to the powerline, then ends at Highway 18 next to a bridge over the Raging River.

Tiger Mountain to Rattlesnake Mountain: Connecting these two parks is currently the hardest logistical puzzle of the entire route. The next designated trail on the route, the Rattlesnake Mountain Trail, has a trailhead at Snoqualmie Point Park several miles away. Sadly, there’s no clear walking trail to reach it. Here are two options, neither of them great:

[Aside: It would be fantastic to have a better way to connect Tiger Mountain and Rattlesnake Mountain. A connector would not only benefit hikers, but also the mountain bikers who use the extensive bike networks on both mountains. If you’re aware of a better connecting route, or a plan to create one, please describe it in the comments.]

Palouse to Cascades State Park Trail (Iron Horse Trail). From Rattlesnake Lake, you’ll pick up the old gravel and dirt railbed. This gently graded section has a number of impressive train trestles over steep rushing rivers. There are few hikers, but plenty of cyclists. Here you’ll pass the first designated campsites on the route; see below. On the north side of the highway, the peaks of the Alpine Lakes Wilderness loom, including Mount Defiance, Bandera Mountain, and Granite Mountain.

Connector to the Pacific Crest Trail. Gaia shows a connecting trail leaving the Palouse to Cascades railbed and climbing to an abandoned road. The trail is there, just east of a rock slide. The initial portion is extremely steep on loose soil; take care and go slowly. After a few minutes, the trail becomes less treacherous but remains gnarly and steep until it reaches the abandoned road. From there, walk up the rocky road to reach the PCT.

(If you want to avoid the steep connector to the PCT, the Palouse to Cascades State Park Trail bores directly underneath Snoqualmie Pass through the 2.25 mile Snoqualmie Tunnel. You could hike through the tunnel, then walk back up to the pass along a road.)

Pacific Crest Trail. After reaching and traversing a scree slope, the PCT enters forest and stays relatively flat all the way to Lodge Lake, a pretty day hike destination. The trail passes small Beaver Lake, and finally emerges on the upper portion of the Summit West ski area. There are expansive views of the Alpine Lakes Wilderness to the north. The trail winds down to the small collection of year-round businesses around the ski area, including a number of restaurants and a motel.

Where to sleep? I would have liked to camp, but could find no areas that permitted camping in the western two thirds of the route, so opted for AirBnB rentals. I broke up the trip into three days: the first night in Issaquah at an AirBnB that was just off the route, and the second night in North Bend at an AirBnB treehouse (!) not far from the Rattlesnake Ledge trailhead. Other overnight options include hotels in Issaquah, Snoqualmie, or North Bend. There is generally decent cell phone coverage along the route, so you may be able to summon a ride service to pick you up. Keep in mind that these are small towns, and there’s no guarantee a ride will be available when you want one.

In the eastern third of the route, there are a number of campgrounds along the Palouse to Cascades State Park Trail: Alice Creek Campground and Carter Creek Campground are directly on the trail, and Tinkham Campground sits closer to I-90. All are within earshot of the highway — bring earplugs. The linked Gaia route shows waypoints for these campgrounds. 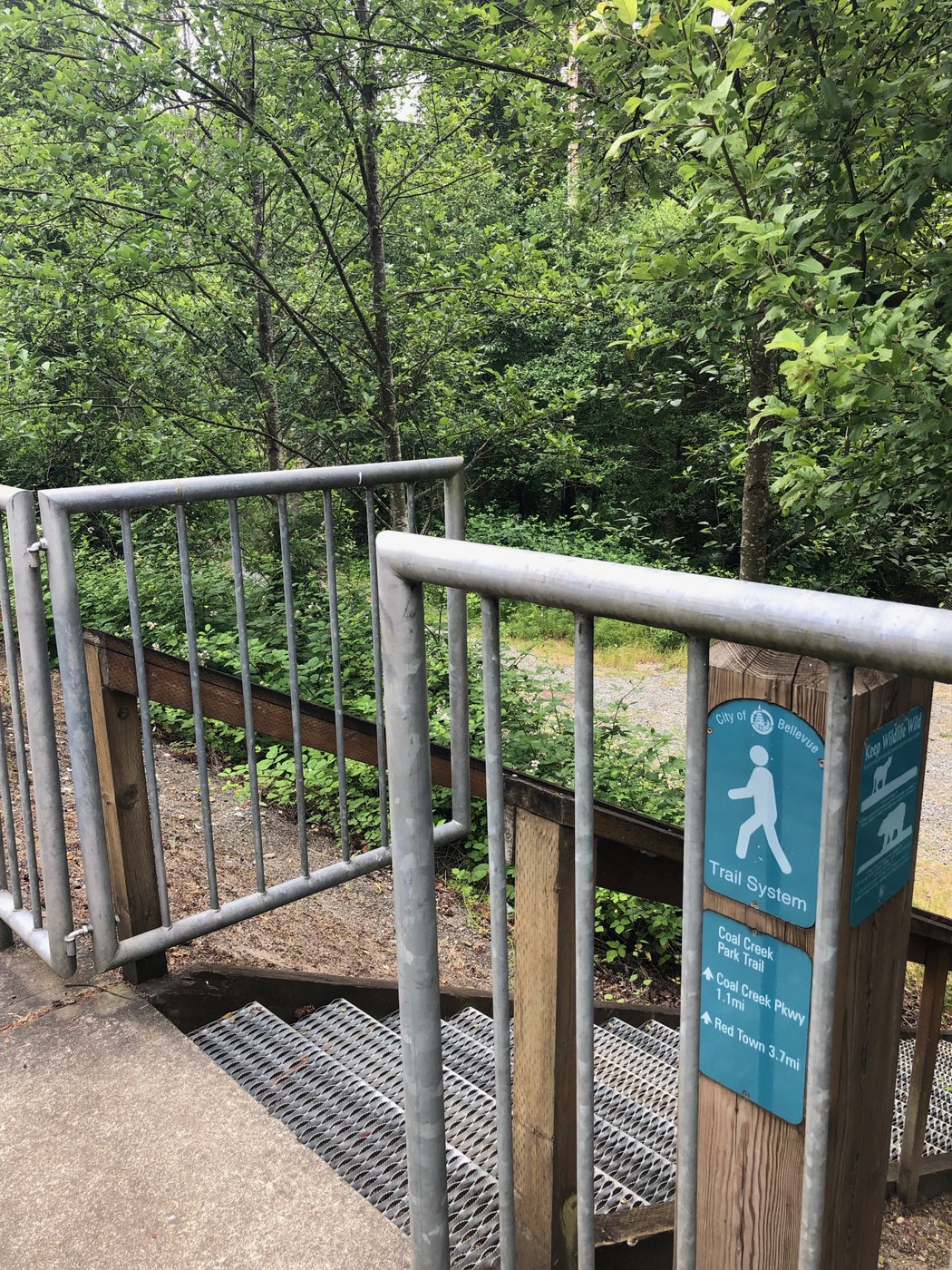 Rattlesnake Ledge has the best view along the route 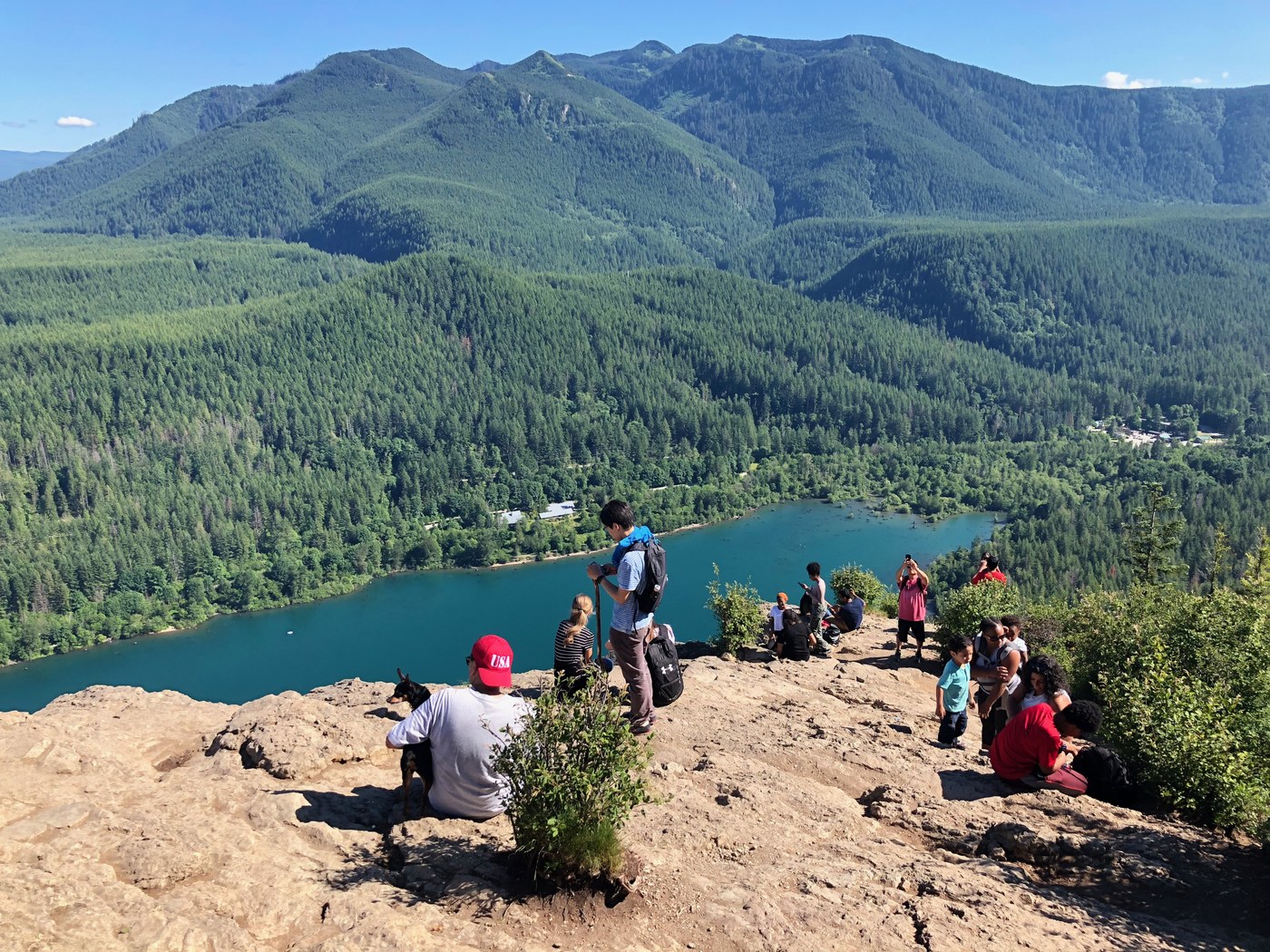 Looking towards Alpine Lakes Wilderness from the PCT 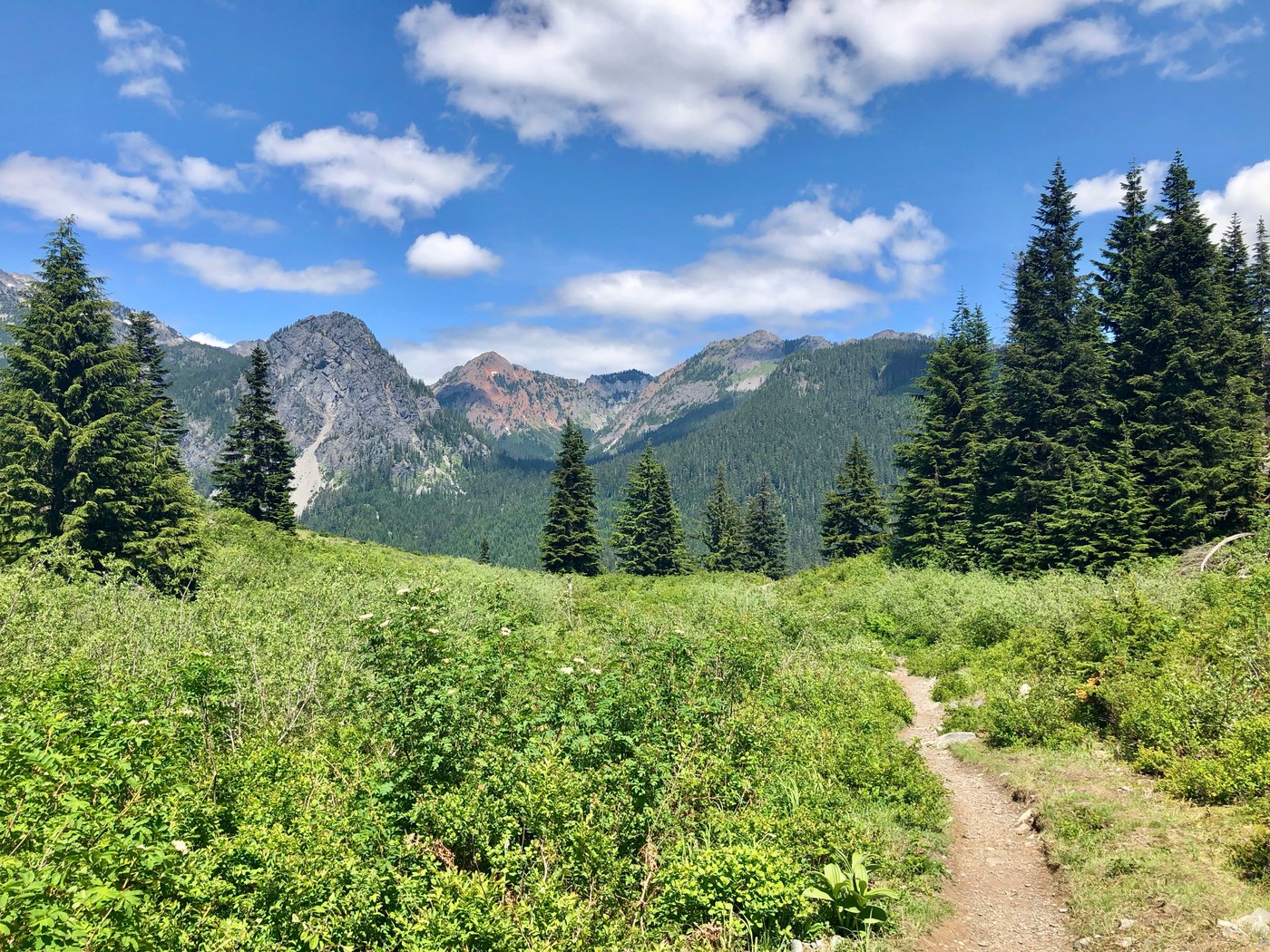 What a wonderful adventure; thank you for documenting it. I was amused that the best view was perhaps the most popular hiking spot in the state, Rattlesnake Ledge. I should also note that the total amount of climbing you did was equivalent to the climb from sea level to the top of Mt Rainier PLUS the climb from the base to the top of our state's biggest ski area, Crystal Mountain.

This is so great. I *love* the first photo of you pointing out where you're doing.

Such a fun story and lots of great intel. :)

OOh, and congratulations of course!

Thank you! I'm glad you enjoyed the story.

I'd thought of that first photo I wanted to take over I-90 looking towards Snoqualmie Pass several weeks before I did the hike. I was a little sad that the weather happened to be overcast the morning I actually started!

One of the spiffiest trip reports in the WTA record.

Great hiking story! What an adventure, best one since Sir Hikes A Lot did the PNT a few years ago. I love the Tolkien quote, that's why I like the books so much, they're basically all about hiking.

As a newbie hiker, I really appreciate trail reports like yours that are descriptive, detailed, and easy to follow. For me 5 or 6 miles is a long hike, so this is out of my ranger for now. But I really appreciate experienced hikers such as yourself taking the time to document where they went and how they found it. Thanks!

Maybe this helps your Tiger-to-Rattlesnake problem...sort of.
You'll miss some of the best of Tiger, but the rail trail through Preston is fun.
MapMyRun: 27.02 mi Tiger to Rattlesnake
Distance: 27.02 mi
https://www.mapmyrun.com/routes/view/2597694085

Thanks for the suggestion!

Thanks for noting the Palouse-PCT connector's condition. I almost used it from Tinkham but decided on another entry point.

I think I found a new summer solstice adventure next year! This is a really fascinating journey and really highlights how amazing it is to have such vast amounts of public lands right at our doorstep. Thank you for this report Jan!

Thanks. Really enjoyed this vicarious adventure, and the wonderful Tolkien quote.