On the shore of the Strait of Juan de Fuca, you can walk a fine sandy beach between high bluffs and two access points to reach the Point Wilson Lighthouse at Fort Worden State Park. Continue reading


(11 votes) Log in to rate
Saved to
My Backpack

41 trip reports for this trail

On the shore of the Strait of Juan de Fuca, you can walk a fine sandy beach between high bluffs and two access points to reach the Point Wilson Lighthouse at Fort Worden State Park. Water and sand play possibilities for children of any age are infinite. The total distance is 2 1/2 miles, and whether the tide is high or low, you can walk it either direction. Kids can write their names or leave messages in the sand or throw sticks to dogs. They can watch long-necked black cormorants dive, and then stretch their wings to dry their feathers.

Tell them that in 1792 when Captain Vancouver and his crew explored Discovery Bay in a small boat, it was a foggy morning. He named Point Wilson for a British friend, and then when the sun came out, he saw the large beautiful bay around it and named it for another friend, a British marquis named Townsend. Ask the kids what they think about these places being named for men who never saw them.

Views are wonderful of Mt. Baker, Vancouver Island, the San Juan Islands, and the Cascades behind them. Follow the beach to the red-roofed Coast Guard lighthouse at Point Wilson. It is not open for visitors, but there are picnic tables available for a lunch stop out of the wind.

From Port Townsend on SR 20: take a left on Kearney Street, right on Blaine Street, left on Cherry Street, and follow signs into the park. The lighthouse is at the far NE corner of the park. You can also park at the west end of the beach as well. Check in at the visitor's center to get a park map. 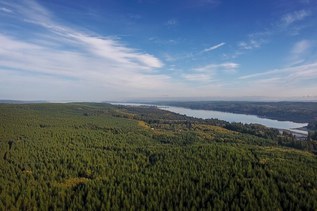 Creating Even Better Hiking for the Port Gamble Forest