Skip to content
Mount Si There are many reasons – besides its proximity to Seattle – why Mount Si is the most popular hike in the state: beautiful views, wildlife (some of it not so wild), old growth forest, and a dramatic summit worthy of a more remote peak. Rising dramatically above the Snoqualmie Valley, it serves as a literal and figurative gateway to the Cascades for thousands of hikers. https://www.wta.org/go-hiking/hikes/mount-si https://www.wta.org/site_images/hikes/15148635572_d7cb258404_o.jpg/@@download/image/15148635572_d7cb258404_o.jpg

Print
A hiker takes a break on Mount Si. Photo by Kayla Burton.

2487 Trip Reports for this trail, below

In the legends of the Snoqualmie people, Mount Si was the body of the moon, fallen to earth through the trickery of the fox and the blue jay. The mountain more than lives up to this otherworldly tale.

To call Mount Si a popular trail is an understatement. It is hiked each year by upwards of 100,000 people. Its rugged beauty and its proximity to Seattle all but guarantee that the parking lot is overflowing on any nice (and many a not-so-nice) day.

Gaining 3,100 feet in a little under four miles, it falls in a kind of sweet spot for experienced and novice hikers alike: enough of a test for bragging rights, not so tough as to scare people away. In early spring, climbers getting ready for Rainier come here with weighted packs. Conventional wisdom says if they can reach the end of the trail in under two hours, they’re ready to conquer the state’s tallest peak.

Switchbacks and climbing begin almost as soon as you leave the trailhead. The trail ascends steadily, but gently, for its first mile and a half. Shortly thereafter, it flattens out as it winds through Snag Flat, a stand of old-growth trees that have survived both fire and logging.

Many hikers rush through this section, but it’s worth taking a second to appreciate the immense size and age of the trees. It’s remarkable that they’re still standing. Prior to being established as a state conservation area in 1977, Mount Si was home to mining and logging; the trail on which you walk was once a 4x4 track. Most hikers overlook a tribute at the start of the trail to the person most responsible for protecting Mount Si –- pioneering state legislator Frances North.

Beyond Snag Flat, the trail steepens, climbing more aggressively through younger forest. At three and a half miles, a brief break in the canopy provides your first real views to the south – look for it at a post that once held a more formal mile marker just before a hairpin turn. The trail resumes climbing and, a quarter of a mile or so later, pitches sharply upwards before reaching a talus slope that bisects the forest, providing expansive views to the southeast. On a clear day, Mount Rainier dominates the horizon. This is the turnaround (and lunch spot) for most hikers, a fact not lost on the gray jays, chipmunks and occasional Douglas squirrel that have learned to beg for handouts. As cute as they are, it's not recommended to feed these animals.

The trail does not end at the lunch spot, though –- look towards the right for stone steps cemented into the rock. It winds up and over the rocks, then back into a brief stretch of forest, before branching off to the left to an overlook of the Snoqualmie Valley, Seattle, and the Olympics. You can also gaze up at the Haystack, Mount Si’s true summit, as well as the lower western summit. Keep an eye out for mountain goats – they’re frequent summer visitors to the rocky slopes below the western ridge. For the vertically inclined, a rough scramble leads to the top of the Haystack from the other branch of the formal trail.

It’s easy to think of Si as merely a very popular trail, but it provides a touch of wilderness in less than a 45-minute drive from Seattle. While most people today might not view it as a folk hero fallen to earth, they do see it as an introduction to the natural wonders of the Cascades. That is what makes this trail truly special.

From Seattle, drive I-90 to exit 32. Turn left onto 436th Ave SE. Follow 436th to its end at SE North Bend Way. Turn left. In three-tenths of a mile, turn right onto SE Mt. Si Road. Follow it 2.4 miles. Entrance to the trailhead will be on the left. A Discover Pass is required at trailhead (and don’t assume no one will check – the lot is patrolled regularly).

For the 2019 hiking season, Trailhead Direct is providing transit service from the Seattle area to popular trails in the area. 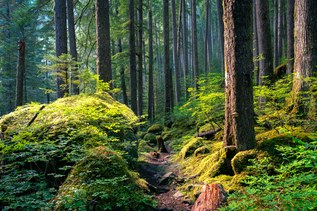