A Powerful Partnership Comes Together to Protect the Port Gamble Forest

A Powerful Partnership Comes Together to Protect the Port Gamble Forest

Nestled in the Kitsap Peninsula is the Port Gamble Forest — a special piece of land that is well-loved and frequently used by the community. Story by WTA and Forterra staff

Near the town of Port Gamble, an easy drive from many big cities around Puget Sound, more than 65 miles of trails criss-cross a green space four times the size of New York’s Central Park.

The Port Gamble Forest is a special piece of land that is well-loved and frequently used by the community. It’s working timber land, but it’s also a popular spot for hikers, runners, bikers and horseback riders. The community’s love for this area has helped create a broad partnership that’s working to save the land from development forever.

The area around Port Gamble Bay has been home to the Port Gamble S’Klallam Tribe and the Suquamish Tribe for more than 1,000 years. For generations, the tribes have hunted and gathered in the forest and fished and collected shellfish in the bay.

The tribe’s reservation is just across the bay from a known ancestral village at what is now the town of Port Gamble. Tribal members are still hunting and fishing nearby lands and waters to feed their families, make a living and celebrate their culture. They expect to be doing so long into the future.

“It means that my children’s children and generations beyond will be able to practice the ways of our culture, harvesting from the surrounding waters and continuing to act as stewards to the same forest, land, and sea that connects them to their ancestors,” —Leonard Forsman, Squamish Tribe Chairman

Leonard believes that the work being done by the Kitsap Forest and Bay Project will help to ensure a strong future for
his tribe.

“It means that my children’s children and generations beyond will be able to practice the ways of our culture, harvesting from the surrounding waters and continuing to act as stewards to the same forest, land, and sea that connects them to their ancestors,” he says. 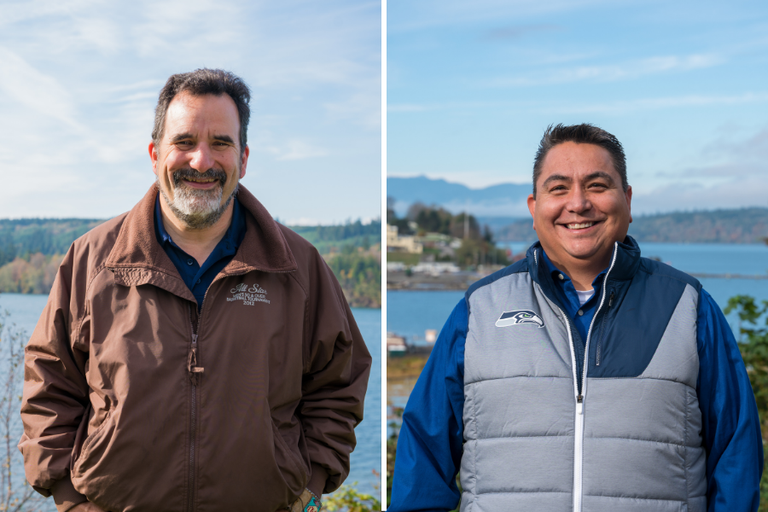 Andrew Pope and William Talbot founded the sawmill town of Port Gamble in the 1850s. Pope Resources still owns the town and the thousands of acres that surround it.

For decades, Pope has allowed hikers, bikers and foragers to use the land, to reconnect with nature without going far from their homes, says Jon Rose, vice president of Pope Resources.

Pope decided in 2007 that it could no longer efficiently continue industrial forest practices in the Port Gamble Forest, due to the population growth of the surrounding areas.

In 2011, Kitsap County and the tribes asked Forterra, a group with a 25-year history of protecting land in Washington state, to negotiate with Pope on their behalf. The goal is to bring as much of the timberland as possible into public ownership, rather than seeing it sold for development.

So far, the partnership with Forterra, the tribes, the county and recreation groups has protected 1,076 acres of forest and 1.5 miles of Port Gamble Bay.

Jon says he hopes the transfer of land can leave a positive legacy for Pope and give those who live in the area a place to recreate well into the future.

Rob Gelder, Kitsap County commissioner, says that in addition to recreation, cultural and environmental benefits, preserving the land would be an economic boon. He believes that outdoor recreation is increasingly important for the region. The impressive size of the land that is proposed for preservation would attract people from a wide area to visit and to spend their money in local communities.

For Lynn Schorn, who has lived in Kingston for 27 years, the Port Gamble Forest was her introduction to the Northwest. When she moved to the area from Colorado, she hiked and biked the forest frequently.

“We did not have maps, GPS or internet, so we created directions in our heads and then over dinner and wine would try to remember and write down the roads,”  Lynn says. “My husband gave out handwritten maps for Christmas one year to those with interest in mountain biking and walking.”

Lynn walked the woods while pregnant, then while carrying her daughter in a backpack. Eventually she taught her daughter how to bike in those same woods.

Sam Decker is a 12-year-old emerging horticulturist. He has spent countless hours exploring the forest and appreciates that it is available for so many users. He hikes the land frequently with his four siblings and his parents. He says he’d be a bit lost without the land to explore.

“It would be like losing a best friend, and I would not know how to spend my weekends not being in the woods,” he says. 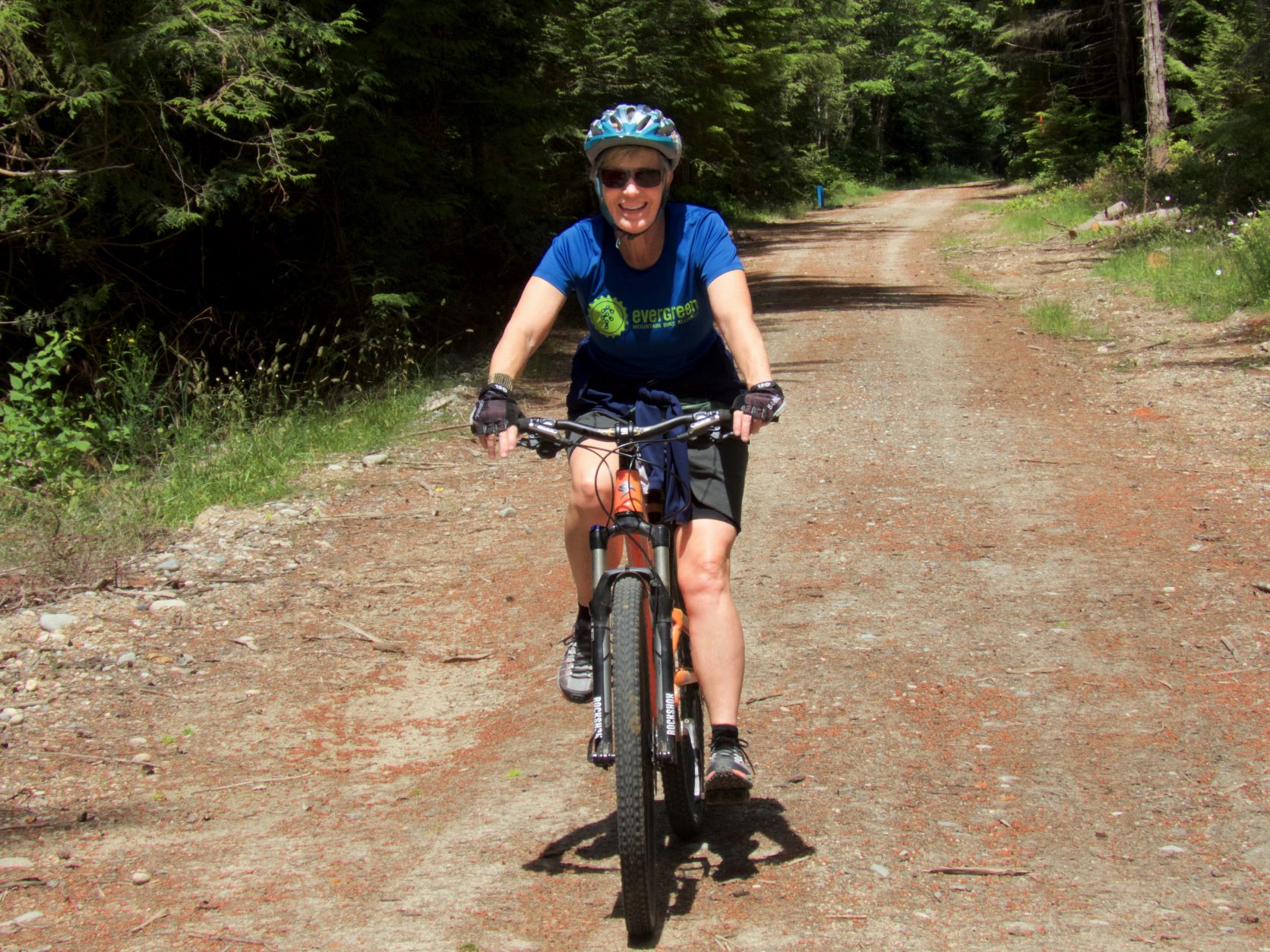 Lynn Schorn (on bike) has been hiking and biking the area for years. Photo by Don Willott.

The goal now of the Kitsap Forest and Bay Community Campaign is to fund the purchase of an additional 3,000 acres of forest—an area six times the size of Seattle’s Discovery Park—that is accessible all year.

“The land is a regional treasure and a place for quiet amid rapid growth,” says Michelle Connor, Forterra’s executive vice president of strategic enterprises. Ultimately, if the forest is protected, the proposed Sound to Olympics Trail will pass through it—creating a route from Kitsap County all the way to the west edge of the Olympic Peninsula. A 200-acre mountain bike park is also planned. The partners in the project are working to develop a plan for more year-round trails and environmental restoration.

“Protection of these forestlands will preserve access to cultural resources for the Suquamish and Port Gamble S’Klallam Tribes and serve as a place of respite and recreation for everyone in our fast-growing region,” Michelle says.

How you can help

Community support has driven the campaign to save the Port Gamble Forest. For the rest of the land to receive permanent protection, however, more support is needed. To ensure the land is not developed and that the public maintains access to the land, Forterra and its partners must raise $3.5 million by July 2017.

To see the land yourself, join a guided hike on Jan. 28 or Feb. 11 at 10 a.m. For more information and to learn how to donate, go to forterra.org/kitsapforestandbay.

This article originally appeared in the Jan+Feb 2017 issue of Washington Trails Magazine. Support trails as a member of WTA to get your one-year subscription to the magazine.