Most stories of Mount St. Helens tell the tale of the volatile volcano and the death and destruction it caused. There’s another volatile story to tell about Mount St. Helens, however. The fight to save the land around the volcano, both before and after the 1980 explosion, is a fascinating case study of the preservation of public land.

This excerpt is from Seattle author Steve Olson’s new book Eruption: The Untold Story of Mount St. Helens. The paperback of the book is out now.

When Mount St. Helens erupted on Sunday, May 18, 1980, Susan Saul, a conservationist in Longview who for the previous two years had been helping to lead the Mount St. Helens Protective Association, was presenting an environmental education workshop for teachers at the Malheur National Wildlife Refuge in Oregon. The refuge had no radio or television reception. All that day, she heard nothing about what had happened.

On Monday she got in her car and began driving home. She turned on the radio and started to hear reports of the explosion. But it was not until she reached home that evening and began reading the newspapers that she learned what had happened. Spirit Lake was gone. The mountain was 1,300 feet lower. Dozens of people were dead. Almost everything she had been fighting to preserve had been destroyed. 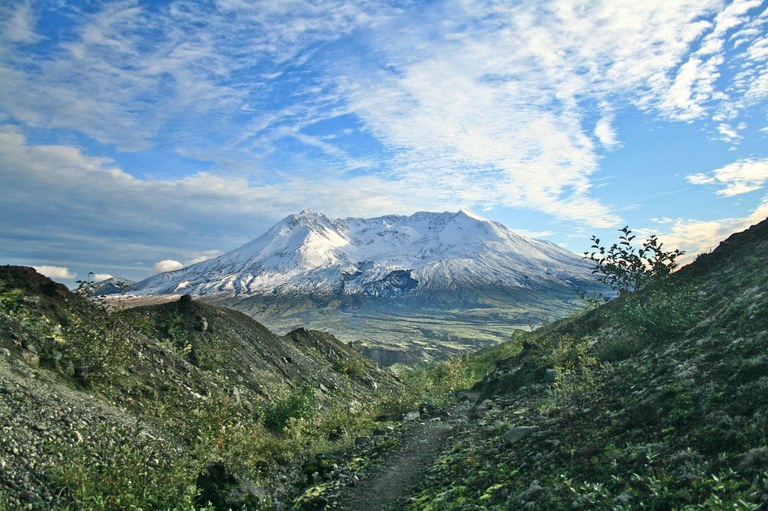 The view from the Boundary Trail. Photo by Mackenzie Hoffman.

About two weeks later, Saul, Noel McRae—the co-leader of the Mount St. Helens Protective Association—and the leaders of several conservation groups met to consider what to do next. Should they give up their plans to establish a monument? If they moved forward, what did they want to protect? They decided to spend the summer gathering information, touring the area and meeting with scientists and government officials.

The scientists with whom Saul and her associates talked clearly wanted the area around Mount St. Helens to be preserved. There was nothing like it anywhere in the world. Biologists were eager to watch life recolonize the blast zone to learn how the earth can recover from even the most severe devastation. Maybe the protective association could build a case for preserving the area as a giant laboratory.

Then the association got a break. On a helicopter tour of the mountain, Saul met a young legislative aide to Rep. Don Bonker named Jim Van Nostrand. Saul and the others talked to him about their past efforts to protect the area around the volcano. Van Nostrand was interested. This was something his boss could get behind. Preserving the area would create new jobs, replacing at least some of those lost when logging operations and mills shut down after the eruption. It could bring tourists back to the area.

Two months later, Ronald Reagan soundly defeated Jimmy Carter for the presidency. Reagan’s win coincided with a pivotal time for the U.S. environmental movement. Conservation groups had grown dramatically during the 1970s, but the success of the movement had contributed to a conservative backlash.

In the late 1970s, a group of angry westerners formed what they called the Sagebrush Rebellion to oppose what they considered unreasonable restrictions on the use of publicly owned lands for grazing, mining and logging. They urged that land controlled by federal agencies be returned to the states, so that it could be managed in a more economically productive manner.

During his campaign, Reagan had offered his support to the rebellion. As he wrote in a telegram shortly after his election, “I renew my pledge to work toward a ‘sagebrush solution.’ My administration will work to ensure that the states have an equitable share of public lands and their natural resources.”

Five days before Reagan was sworn in, the Mount St. Helens Protective Association held a news conference to announce a new proposal for preserving the area around the mountain. The plan called for a 216,000-acre monument that would protect everything of geological, scenic, recreational and ecological interest around the mountain. It would still allow most of the downed timber to be salvaged, but it proposed that thousands of acres of downed trees, representing millions of dollars of potential profits, be left in place for scientific research and for tourism.

Washington state officials, the U.S. Forest Service and logging companies were united in their opposition to the proposal. They contended that the proposal protected too much harvestable forest, removed too much area from the tax base and eliminated jobs. A state committee instead recommended that an area of less than 50,000 acres be set aside for scientific study. The Forest Service called for an “interpretive area” of about 85,000 acres centered on the volcano and Spirit Lake while still leaving land open for geothermal leasing, mineral prospecting and open-pit mining operations.

In hearings on the proposed bills that spring, a remarkably diverse array of interests presented their views. The group vice president for western operations of the Weyerhaeuser Timber Company, which owned much of the privately held land around the volcano, said that the loss of timber in the compromise proposal “would have serious implications for forest industry jobs and raw material supplied for the region,” though he also expressed Weyerhaeuser’s willingness to trade areas it owned within the Forest Service plan for timbered land elsewhere.

In contrast, the scientists and conservationists who testified argued for a large monument. University of Washington geophysicist Steve Malone expressed his fear “that the temptation—in fact, even the desire—to help Mother Nature out, to fix the broken mountain, would be almost irresistible. Influencing what is naturally occurring is anathema to good science that is trying to figure out what would normally occur.”

After a reconciliation between votes in the House and the Senate, a final bill called for a monument of 110,000 acres.

Weyerhaeuser carried through on its promise to cooperate. It and Burlington Northern traded away about 32,000 acres of land inside the boundaries of the monument in return for 7,400 acres of land outside the protected area. The monument would be under the jurisdiction of the Forest Service, but it would be managed as a separate unit and have its own planners and supervisor. Fishing and hunting were allowed in parts of the monument, but road building was discouraged. Most unusually, the legislation specified that the Forest Service “shall manage the Monument to protect the geologic, ecologic and cultural resources, in accordance with the provisions of this Act, allowing geologic forces and ecological succession to continue substantially unimpeded.”

The bill had made it through Congress, but now it faced a final and perhaps insurmountable hurdle. President Reagan had not forgotten his promises to the Sagebrush Rebellion.

In the final analysis, however, Ronald Reagan was more of a politician than an ideologue. He had more to gain than to lose by signing the monument legislation. In 1982, his administration’s environmental policies were under widespread attack. He risked losing support and seats in the House and Senate if he vetoed a popular bill.

On August 26, 1982, with little fanfare, Reagan signed the bill. It was the first, but hardly the last, public lands legislation adopted in the Reagan administration. By the end of his presidency, Reagan had added 38 million acres to various categories of permanent protection and nearly 5,000 miles to the National Wild and Scenic Rivers program and the national estuarine reserves system. “Preservation of our environment is not a partisan challenge,” he said in 1984. “It’s common sense.”

A few weeks after the signing, Rep. Bonker held a party in his congressional offices to celebrate the monument’s creation. Representatives from all of the relevant groups were there: environmentalists, timber companies, railroads, chambers of commerce. For more than a hundred years, ever since the land around Mount St. Helens was divided into square-mile sections and distributed among eager potential landowners, each group had pursued its own interests in the dense forests, open meadows and rocky slopes surrounding the mountain. Now they had agreed on at least one thing: The land around Mount St. Helens should be saved for future generations.

Excerpt from “Eruption: The Untold Story of Mount St. Helens” by Steve Olson. Copyright © 2016 by Steve Olson. Used with permission of the publisher, W.W. Norton & Company Inc. All rights reserved.