After the 1980 eruption of Mount St. Helens, trail designers suddenly had a blank slate to work with. Here’s how they shaped the paths we walk today, both near the volcano and far beyond | by Steve Olson

Look at the history of trails and a common theme emerges. Originally, most trails were utilitarian—a means to an end. But hikers are looking for an experience; they value the journey as much as the destination. As a result, the nature of trails has slowly changed, as new trails are built or old ones are redesigned.

In one case, however, the change was dramatic and literally explosive—and it’s a fascinating example of how trails can be designed to provide an experience and tell a story. 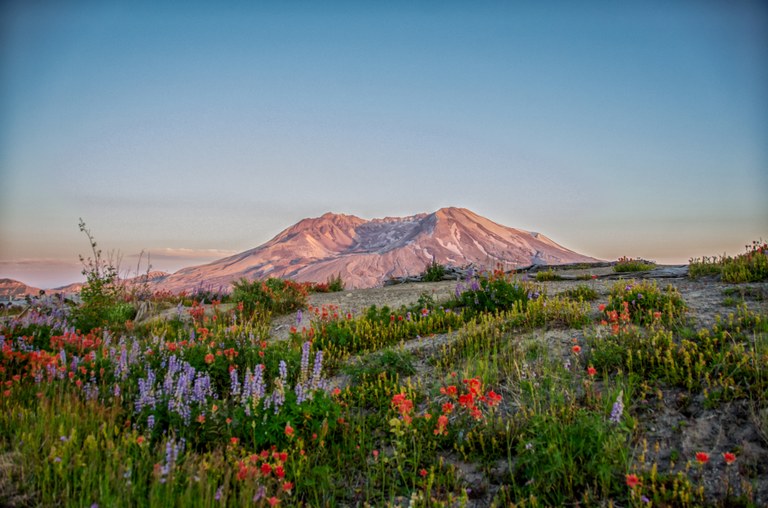 The Loowit trail helps tell the story of the landscape of Mount St. Helens. Photo by Missy Fant.

The May 18, 1980, eruption of Mount St. Helens obliterated the existing trail system around the volcano. That gave recreation planners a blank slate on which to draw a new trail system, and they did so in a way that offers a case study in a new style of trail design.

Most trails have a purpose rooted in history, says Francisco Valenzuela, who was the recreation planner for the Mount St. Helens National Volcanic Monument when it was created in 1982. A trail might have led to a cabin or lookout or it might have served as an old road or rail bed.

Around Mount St. Helens, however, “most of the trails were developed after 1980, so almost none had an older purpose for being,” Francisco says. Instead, the monument’s planners decided that trails should allow visitors to appreciate the geological, biological and cultural features of the monument while protecting fragile ecosystems and landscapes.

“We wanted to let nature do its own thing and not get in the way—which is a smart idea when it comes to volcanoes, because they do their thing no matter what,” - Francisco Valenzuela

For every trail that planners considered, they asked themselves, “What story should this trail tell?” A trail might be designed to show hikers how the land is recovering. It might reveal a consequence of the 1980 eruption. It might lead to a spectacular view or isolated lake. “A trail is like a play,” Francisco says. “It needs a narrative.”

To tell that story the best possible way, trail crews laid out several options for each potential trail, says Jim Slagle, who was the Gifford Pinchot National Forest trail engineer during the development of the system. Trail planners then reviewed each of the alternatives and chose the best. “For every mile of trail we built, we probably laid out five to eight miles of trail as alternatives,” Jim says.

The trails have varying difficulty levels. For example, the Independence Pass Trail that leads to a view of the volcano over the eastern arm of Spirit Lake was designed to provide an easy hike that would attract families and day-trippers. It has logs where hikers can sit and rest and a wide, smooth tread so that groups can pass each other easily. In contrast, trails just a few miles away around Mount Margaret are steeper and chiseled into the sides of steep slopes, offering an experience that only seasoned hikers are likely to enjoy.

Building trails after the eruption presented unique challenges, Jim recalls. Many trails passed through areas where the force of the eruption had blown down entire forests. Trail planners did not want to create a path through the forest with chain saws, because that would make hikers feel that they were walking in a tunnel carved through the trees. Instead, crews used heavy winches to move downed trees out of the way. They also relied on more forceful measures. Most of the trees were badly splintered by the blast. To create trails, the crews therefore drilled holes in downed trees, inserted dynamite and blew the trees out of the way. “The trees were already splintered, so it looked like the eruption had done that,” Jim says.

For many trails, a prominent goal was, as Robert Moor says in his book “On Trails,” “somewhat paradoxically, to artificially create something natural.” The Butte Camp Trail, for example, passes through a lava field with spectacular views. Trail crews brought in gravel and dirt to create a path that wends through the lava boulders. “The trail does not call attention to itself,” Francisco says. “It looks like the trail has always been there. It feels like it belongs. It’s a hidden art.”

"It looks like the trail has always been there. It feels like it belongs. It's a hidden art, " - Robert Moor

Other trails have more obvious purposes. The summer climbing trail to the south rim of the crater passes quickly through a sensitive forest area and then reaches a section of exposed basalt, where the rock limits the environmental damage caused by large numbers of hikers. Once above the rock outcroppings, the trail heads straight up the mountain without switchbacks to get hikers where they want to go as quickly as possible.

The ground surface around the volcano remains very dynamic, which presented another challenge to trail builders. For example, the Loowit Trail that rings the mountain at about the level of the former treeline is difficult to sustain, as loose ground material washes out and canyons around the mountain erode. But for ambitious hikers who are willing to improvise, it offers an unparalleled opportunity to see the volcano close up and from every direction.

The opportunity to create an entirely new trail system after the eruption was unique, says Francisco. But, he adds, the approach used there could be much more widely applied. Trails in the Pacific Northwest and elsewhere could be reengineered and relocated to accommodate the larger numbers of people looking for wilderness experiences. Easy and shorter trails could serve most hikers, while harder trails cater to more advanced hikers. More loop trails could be created, they’re less crowded than out-and-back trails. Public transportation to trailheads and parking lots could be reconfigured to help people get to hiking areas while also limiting the overuse of trails.

Such an approach is part of the broader sustainable trails movement, which seeks to limit the environmental impacts of hikers while still encouraging people to get outside. That was the goal at Mount St. Helens, says Dave Seesholtz, a former resources assistant for the Giff ord Pinchot National Forest. Planners sought input from trail users while designing trails that could stand up to those uses. “We could build trails for the purposes they were intended to have,” Dave says.

As Francisco puts it, “Nature needs us to help sustain it, and we need nature to help sustain us. Both those purposes are fundamental goals of outdoors recreation design.”

That’s a goal WTA has embraced in its work, including at Mount St. Helens. Ryan Ojerio, Southwest Washington regional manager for WTA, has done a lot of work around the volcano and will do a lot more over the coming years. The experience is a vital consideration.

“While building the Volcano View Trail, we were challenged with the task of transforming an old logging road into a forest path,” Ryan says. “The efficient route would have gone right up the middle of the road, but we designed in curves, dragged huge logs across parts of the old roadbed and splintered chain-saw cut stumps by hand with Pulaskis to give it a more natural feel. It is ironic that a trail that is in harmony with the natural landscape takes so much more thought and effort to design and construct. But the initial investment pays off in the added value it brings to hikers’ experiences and the reduction in long-term maintenance costs.”

This article originally appeared in the May+June 2017 issue of Washington Trails Magazine. Support trails as a member of WTA to get your one-year subscription to the magazine.