After 40 years as a backcountry ski destination, Alpine Lakes High Camp’s new owners, Justin and Austin Donohue, have opened it year-around. Two hikers paid a visit to see how the rustic cabins and front-door trail access stack up in the summertime. | by Andrew Coghill

On the shore of Chiwaukum Lake we have a choice to make — continue hiking 2 miles to Larch and Cup lakes, rumored to be festooned in alpine splendor — or turn around earlier than planned and retrace our steps 3 miles to Bluebell cabin, where we can laze the afternoon away, read our books on the cabin deck, listen to the creek and watch the wind in the trees.

Such are the hardships at Alpine Lakes High Camp.

My girlfriend and I booked a mid-July, 3-day stay at the backcountry retreat, and were excited to hike in the neighboring Alpine Lakes Wilderness — nearly 400,000 acres of clear streams, jagged peaks and lush, fragrant forests in Washington’s Central Cascade Range. We hadn’t planned on letting any daylight hours slip idly by. 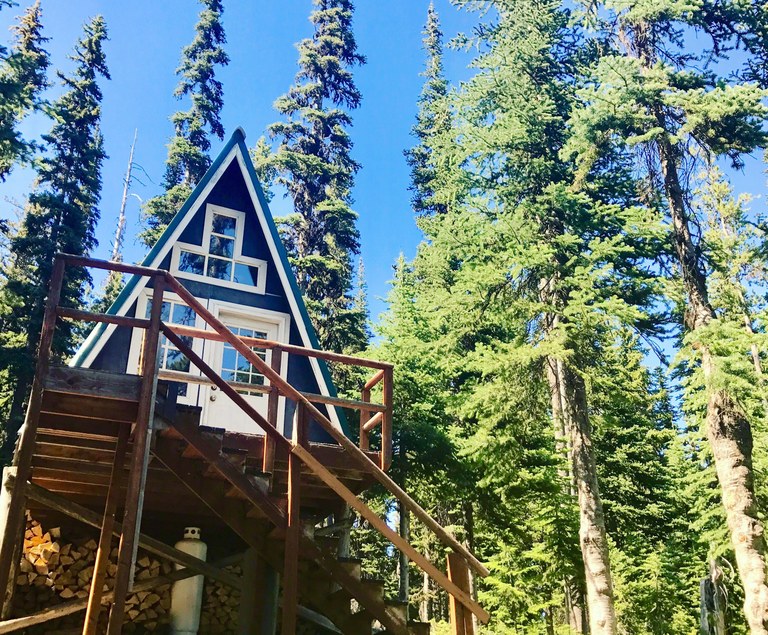 We started the adventure by driving to the guest parking lot just off Highway 2, halfway between Stevens Pass and Leavenworth. We arrived at camp by way of a bumpy 8-mile gravel road in a black Range Rover shuttle vehicle. We sat with Becky and Dennis, a couple also visiting from Seattle. Once we dropped our gear at Bluebell cabin and our camp host McKenzie gave us a map highlighting 10 hikes in the area, we sank a couple of warm ones in the creek and set off.

I had a feeling that I could only associate with childhood. It was a feeling that comes when time falters, all commitments vanish, and the world collapses into a single afternoon.

We crossed a small stream and gawked at a distant waterfall from the empty trail leading to Lake Julius and Loch Eileen. As the third and highest lake in the chain, Lake Donald was just right, lapping at a talus field at the base of a mountain backed by blue sky. There we rested above the mosquitoes and gazed at the lake as a breeze swept shimmering diamond paths on its surface. One day of exploring down, two to go.

But then the unexpected happened. We returned from Lake Donald for a relaxing evening in High Camp, including a soak in the wood-fired hot tub, an unwind in the sauna and a sleep warmed by crackling firewood in the stove. The next morning, my die-hard urge to hike melted into the mountain like last winter’s snow. High Camp had its hooks in me.

Originally named Scottish Lakes High Camp, the 20-acre camp has entranced guests with simple comforts and access to backcountry trails since founders Bill and Peg Stark built the first A-frame cabin in 1978. High Camp developed through the work of the Starks and later owners Don and Chris Hanson into a cluster of nine cabins and a lodge surrounded by fir and spruce trees at 5,000 feet.

The cabins are simple and comfortable, efficient in design and patinated with charm. Cabins vary in size and bed count, but each cabin has a wood-burning stove, propane lantern, propane two-burner stove, cookware, dishes, table and chairs, and ample windows for natural light and forest views. It’s off the grid, but small devices can be charged off two solar panels at the lodge. Spring water is provided to each cabin in 5-gallon containers.

The cabins are positioned for a bit of privacy, and small winding paths that connect the cabins allow guests to be as neighborly as they like. The lodge, with its library, loft, hot coffee, kitchen and large community room, acts as a meeting place for shared meals and swapped stories. (During our stay, Becky and Dennis gave out squares of delicious carrot cake.) 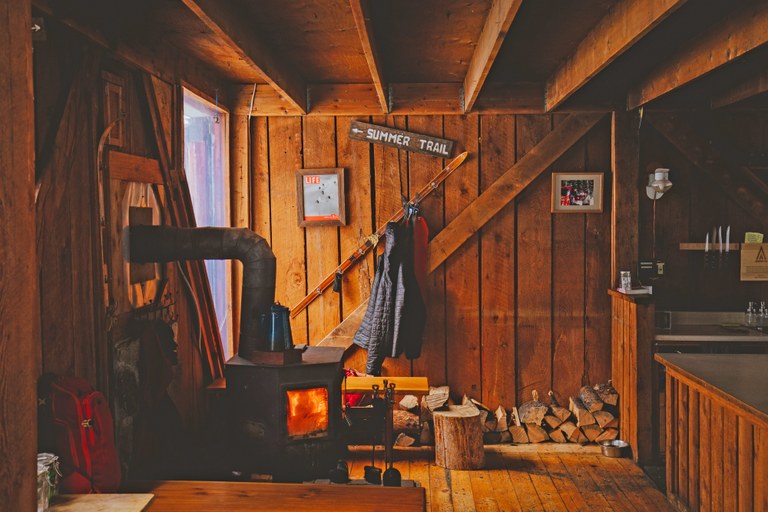 High Camp’s year has always centered on the winter season. Big powder days are the norm, and you won’t find a crowd or a lift line. With a trail system built with all skill levels in mind, and access to backcountry routes, High Camp has kept skiers and snowshoers happy campers for 40 years.

Summer is now on the activity calendar thanks to new owners Justin and Austin Donohue, who purchased and renamed the property in 2017. The husband-and-wife team have partnered with the Evergreen Mountain Bike Alliance to build out existing bike trails and aim to add two trails per year. Group rentals for retreats, weddings and family gatherings are becoming more popular. Another activity in the works: weekend options that guests can sign up for like guided mushroom foraging, nature photography and stargazing.

While only a day before I would have laughed at the idea, we in fact turned around at Chiwaukum Lake. We climbed McCue Ridge, pausing at Inspiration Lookout to admire a view to the north of snow-enthroned Glacier Peak, then descended to Bluebell down a trail named Wild Bill Hill. Becky, an avid hiker, later told us that Cup Lake was possibly her favorite hike in the Cascades.

Sometime that afternoon while lying in the silent cabin, or maybe it was the next morning after ditching hiking plans and sleeping in, I had a feeling that I could only associate with childhood. It was a feeling that comes when time falters, all commitments vanish, and the world collapses into a single afternoon.

McKenzie, who has seen many guests come and go in her three seasons as camp host, told me that most people leave High Camp feeling more grounded. She added, “They got to enjoy some wild air.”

While High Camp doesn’t have the conveniences that come with electricity or indoor plumbing, it’s also free from digital clocks and the electrical hums, drones, ticks and general rush that have a way of creeping into life. For a weekend at least, I’ll take that trade all the way to the outhouse.

Hikes come in all lengths at High Camp. Hikers can link together trails to create loop hikes of 2-4 miles to landmarks like Wedding Point and Stegosaurus Rock. For longer hikes, Forest Service trails into the Alpine Lakes Wilderness are easily accessible.

Lake Julius and Loch Eileen: 6 miles round trip The climb to Lake Julius, high in the Chiwaukum Mountains, begins with a quick ford or log walk across Roaring Creek. The extra time to reach Loch Eileen is worth the effort. A cairn-punctuated wilderness route leads higher to less frequented Lake Donald.

Larch Lake: 10 miles round trip Climb McCue ridge and then descent to Chiwaukum Lake, home to brook and cutthroat trout. The trail winds through Ewing Basin before reaching subalpine terrain near exquisite Larch Lake. An optional scramble ends at Cup Lake, where snow can last well into July.

Alpine Lakes High Camp is 15 miles east of Stevens Pass. It’s at 5,000 feet and features 9 cabins. Transportation is provided, for a fee, from a parking area to the cabins.

While High Camp provides beds and pillows, you’ll need to pack sleeping bags, linens and pillowcases. Bring food in coolers or hard-sided containers that can be closed or zipped — open topped bags are too difficult to transport.

This article originally appeared in the Summer 2019 issue of Washington Trails magazine.  Support trails as a member WTA to get your one-year subscription to the magazine.