Skip to content
A Day of Action: Hikers Raise Their Voices on Washington Trails Day This Washington Trails Day, thousands of hikers raised their voices for funding on this day of action, hiking and celebrating. https://www.wta.org/news/signpost/a-day-of-action-thousands-of-hikers-raise-their-voices-for-washington-trails-day https://www.wta.org/news/signpost/a-day-of-action-thousands-of-hikers-raise-their-voices-for-washington-trails-day/@@download/image/watrailsday.jpeg

A Day of Action: Hikers Raise Their Voices on Washington Trails Day

This Washington Trails Day, thousands of hikers raised their voices for funding on this day of action, hiking and celebrating.

Early Saturday morning, WTA volunteers, staff, ambassadors and board members spread out at trailheads across the state — from the Siouxon Creek trail in the southwest to Artist Point in the north, from Poo Poo Point, Rattlesnake Ledge and Snow Lake in the west to Bowl & Pitcher at Riverside State Park in the east. They greeted hikers and asked them to sign postcards to send to Washington’s U.S. senators. They shared information about WTA and answered questions about getting outdoors.

Why did they spend all day talking to (mostly) strangers? To celebrate Washington Trails Day! A hiker fills out a postcard to Washington's senators before heading up the Poo Poo Point trail. Photo by Christina Hickman.

A DAY FOR HIKING, A DAY FOR ACTION

Washington Trails Day — our state's official holiday to recognize the importance of trails and our public lands — is a day for hikers to take action. WTA led the effort to get the holiday declared by the governor seven years ago.

This year, we asked hikers to sign a petition to let Washington’s U.S. Senators, Maria Cantwell and Patty Murray, know just how important trails are and how important it is to invest in them. And on August 3, more than 3,000 hikers spoke up!

Here are some Trails Day stories from across the state. 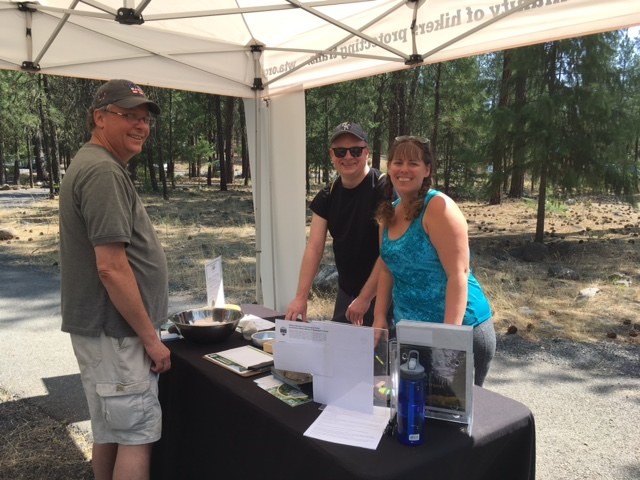 At Riverside State Park in Spokane, volunteers Galen Denio and John Kreuzinger greeted a steady stream of visitors starting right when they finished setting up at 7:30 a.m. Denio noted the “excellent interest and support from both bikers and hikers." The response was so overwhelming, in fact, they stayed an extra 45 minutes. By the end of the day, hikers had signed all the postcards they had.

The same was true at Poo Poo Point. Volunteer Kristen Ashley, who left Ellensburg at 5 a.m. to set up, “enjoyed the woman who handed postcards out to her entire family demanding that they fill them out, and people who originally were walking away, but would walk back to fill out postcards once they knew what they were for.” WTA volunteers at several trailheads mentioned the great diversity they saw in hikers.

Dawn Hammer, WTA communications intern, volunteered at the Rattlesnake Ledge trailhead. “I have never seen such diversity on trail — ever," she said. "Every size, shape, color, age and ability was represented (and that description is true for both humans and dogs). ... It was exciting to see just how many people from all walks of life were out, early in the morning, taking advantage of such a gorgeous trail."

At the Snow Lake trailhead, Rusty Sherman “saw, and spoke with, people of all ages, nationalities and backgrounds.” And after his time at Artist Point, WTA ambassador Richard Mellon recalled “it was great to encounter such a diversity of folks — young, old and in between, from places and countries near and far, day hikers, backpackers, some with fishing gear, others with skis…  all of them there to savor and gain renewal from our public land.” Volunteers and hikers (and dogs) pose for a photo at Snow Lake. Photo by Bruce Burger.

Hikers of the future

At Snow Lake, WTA board member Bruce Burger said he was “struck by the large number of new hikers and families.”

Dawn observed that “there were lots of kids who signed our postcards, and it was heartwarming to see the sheer number of the next generation out on trail — and that they were engaged and aware enough that they wanted to participate and say 'thank you' themselves, and not just let their parents do it.”

Dawn also met two adult women fairly new to hiking. One had moved to Washington recently and was excited to learn more about WTA.  Another woman said she was hiking for her mental health.

“Her therapist told her she needed to find her ‘thing’, the thing that would bring her joy and be just for her," Dawn said. "She decided that hiking would be her thing, and she's made it a goal to hike a new trail every month.” 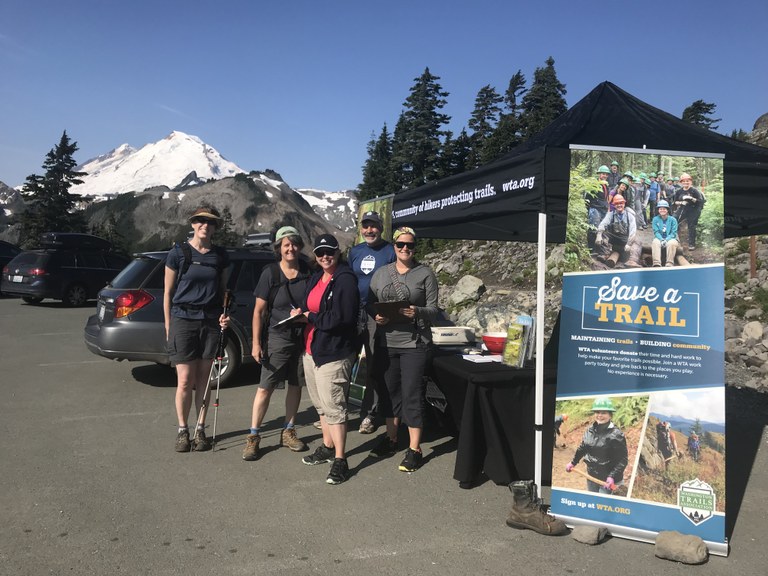 Hikers stop for a photo with WTA ambassador Richard Mellon at Artist Point. Photo by WTA board member Titti Ringström.

WTA volunteer Jennifer Fortin shared one of the most touching stories of the day. At the Siouxon Creek trail, she met an 8-year-old from Florida about to embark on his first hike.

“He had a new backpack, hiking poles and was headed off on his adventure.  He said he had never seen a waterfall before, or rapids in a creek,” she recalled. “He was just shaking with excitement about his upcoming adventure with his family. He just made my day with all his enthusiasm.” Hikers-turned-advocates sign postcards before heading up to Rattlesnake Ledge. Photo by Jim Clagett.

Learning to leave no trace

As part of WTA’s Trail Rebooted campaign, we are working to increase hiker education through our trail smart hikers work. The topic of Leave No Trace guidelines came up at a couple of different trailheads.

After her volunteer shift, Dawn hiked the Rattlesnake Ledge trail, and she had plenty of company on such a perfect summer day. However, she was pleased "to encounter such good trail etiquette from everyone. Dogs were on leash and well-behaved; people stepped aside for one another and greeted each other with smiles and hellos; and there was only minimal trash that we picked up, most of which looked to have been accidentally dropped rather than carelessly tossed.”

(Want to help keep our trails clean? Join us in pledging to pick up trash on trail.)

Volunteer Ginger Sarver experienced the closeness of the hiking community firsthand. As she greeted a family of five at the off-the-beaten path Siouxon Creek trailhead, she realized she knew them — former neighbors who'd just resettled in Portland after years of world travel — but they hadn't seen each other in several years. After hugs and photos, the family signed the postcards and “asked many great questions about trail etiquette and leave no trace so they could begin teaching their little ones about appropriate behavior on trails. That's three little trail stewards in the making!” Be a trail champion

“Seeing everyone outside was a tangible reminder that we do, in fact, need advocates and funding to keep these beautiful outdoor spaces accessible for all,” Dawn said.

It’s true. We need you advocating for our trails not just on Washington trails Day, but every day.

If you missed us on Washington Trails Day, you can still make your voice heard and be a part of the celebration! Here are some simple ways to be a champion for trails: A steady stream of hikers head up to Poo Poo Point early Saturday morning, while WTA volunteers Phillip Boynton and Kristen Ashley speak to others about Washington Trails Day. Photo by Christina Hickman.