Skip to content
A Family Quest to the Hike 7 Trails Built by WTA in the Southwest Ryan Ojerio, WTA's Southwest Regional Manager, set out with his kids to hike the 7 new trails built by WTA volunteers in one month. Here's their story. https://www.wta.org/news/signpost/a-family-quest-to-hike-7-new-trails-built-by-wta https://www.wta.org/news/signpost/a-family-quest-to-hike-7-new-trails-built-by-wta/@@download/image/lola-hardy-ridge.jpg

Ryan Ojerio, WTA's Southwest Regional Manager, set out with his kids to hike the 7 new trails built by WTA volunteers in one month. Here's their story. 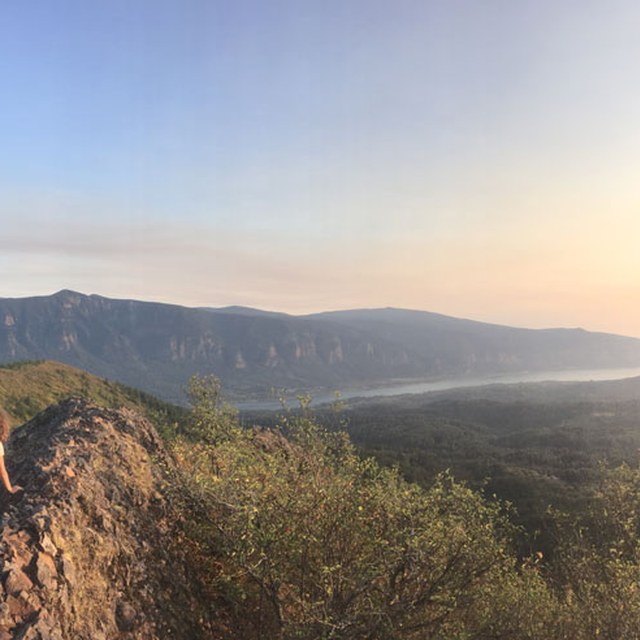 Lola on Hardy Ridge, views of the Columbia River Gorge behind her, at sunset. Photo by Ryan Ojerio.

Ryan Ojerio, WTA's Southwest Regional Manager, manages volunteers, scouts projects, advocates for trails and promotes hiking in Southwest Washington. During August's Hike-a-Thon, he set out with his kids to hike the 7 new trails built by WTA volunteers in his big backyard.

On the last hike on the last day of our month-long quest we were down to our last diaper and out of milk. The sun was low in the west, and I realized that if I pushed them too far, this adventure could backfire.

Kai, still a toddler, won't remember any of this. But Lola is at the age I was when my dad took me on adventures that I remember vividly (like the time we returned from a trip by coasting down all the hills because the car was nearly out of gas). I looked at Lola closely. She didn't seem to mind that it would be dark soon, and I didn't want to give up.

So we pressed on.

The goal of our quest was to hike all seven of the new trails built by WTA volunteers in Southwest Washington. An ambitious goal for sure, but what better way to spend our August while helping raise funds for trail work with Hike-a-Thon?

Each of these trails hold many fond memories for me, and I wanted to share that with my kids. Hopefully they will enjoy hiking them as I have, and, when they're old enough, they'll be inspired to volunteer to take care of them too.

We kicked off our quest at Vancouver Lake where Lola visited her first work party at just 3 years old. Then we were off to Mount St. Helens to hike the Volcano View Trail. We drove to the coast and saw a momma bear and black bear cub on the Hines Marsh Trail at Leadbetter Point State Park. We ended our trip at Beacon Rock State Park, where WTA built the Bridge Trail, River to Rock and the Hardy Ridge Trails.

We reached the top of the Hardy Ridge Trail just as the sun was setting casting its warm, golden glow all across the Columbia River Gorge. It was a magical moment that I knew the kids could feel. They didn't want to leave.

When finally got home, it was way past bedtimes. Their Mom had a hot pizza waiting for us. Our Hike-a-Thon was over, six of seven trails completed (the Traverse Trail at Coyote Wall will have to wait). But our family's lifetime of adventures is just getting started. 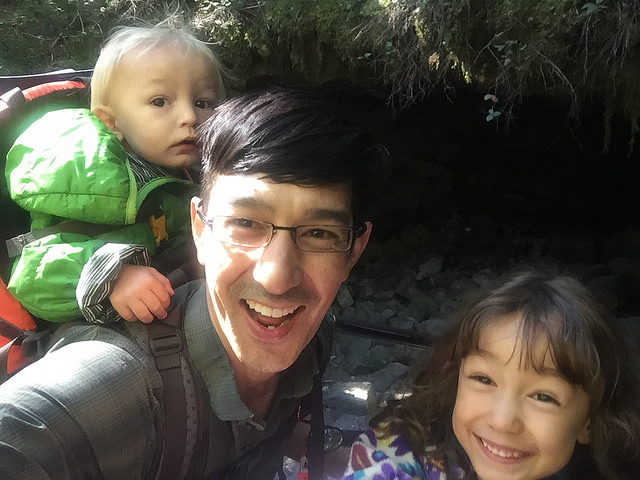 Kai, Ryan and Lola on the Volcano View Trail. Photo by Ryan Ojerio 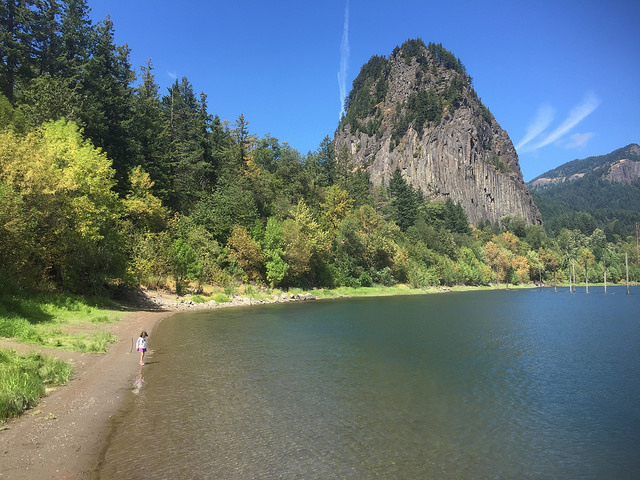 Lola at the River to Rock Trail. Photo by Ryan Ojerio. 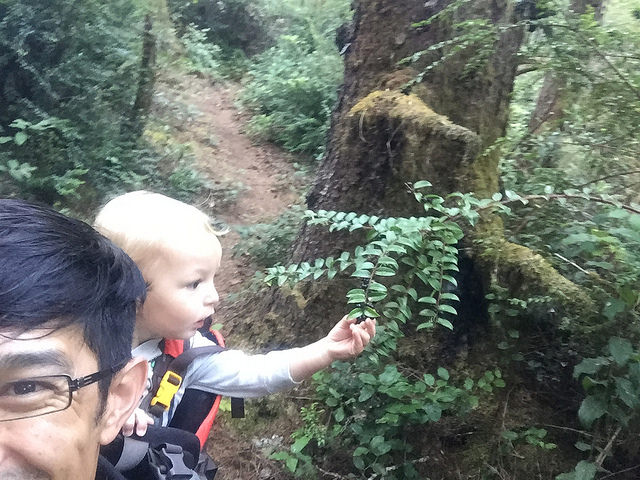 Kai, entertained by nature on the Hines Marsh Trail. Photo by Ryan Ojerio Lola rock-hops through a drainage structure along the Hardy Ridge Trail. Photo by Ryan Ojerio 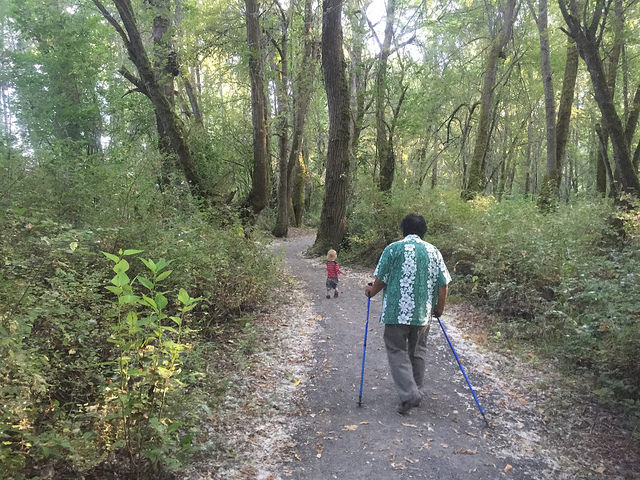 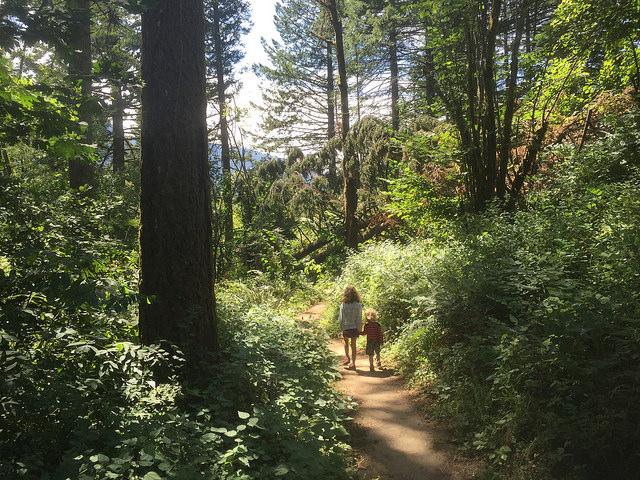 Lola shows Kai the ropes along the River to Rock Trail. Photo by Ryan Ojerio

An inspiration to a new mama

Ryan, Thanks for sharing your family adventures. I am inspired by your dedication to get your kids outside.

Ryan, thanks for a wonderful story. What neat kids. I took mine three daughters on a number of back packs and they still deride me for the ants, varmints, snow and all the fun they had. Pete Dewell - they (my girls) are all in their 50s now.

Thanks for sharing your family quest with us. We've only been here for 2.5 years (originally from Dallas, TX) and this summer we set our sight on the Wonderland Trail. We did day hikes each week between Memorial Day and Day 1 (starting at Mowich Lake, clockwise), with increasing distance and weighted packs.

It was an incredible 12-day trip - so very hard, physically and emotionally, but so worth it.

This next summer, I'd like to do something like you've described, since we'll have the baby and will likely not do such a long-trip. So, thanks for sharing about this quest. This is a great idea and very inspirational.