Skip to content
A Spokane Crosscut Saw’s Legacy In 1915, Kisaburo Shiosaki started a laundry business that went on to serve Spokane for 90 years. At the heart of the . a business which his four sons and a crosscut saw helped keep going for 90 years. https://www.wta.org/news/signpost/a-spokane-saws-crosscut-legacy https://www.wta.org/news/signpost/a-spokane-saws-crosscut-legacy/@@download/image/image.jpg

In 1915, Kisaburo Shiosaki started a laundry business that went on to serve Spokane for 90 years. At the heart of the . a business which his four sons and a crosscut saw helped keep going for 90 years.

WTA’s crosscut saws, singing back and forth between two volunteers, are vintage hand-tools with a modern mission: to clear hundreds and thousands of trees that fall across Washington’s trails in avalanches, landslides and wildfires.

I like to imagine the stories these tools would tell us if they could, but seldom are we lucky enough to know the history of the old crosscuts that are still put to good use by our volunteers today. So it was a rare gift when, this summer, my hiking friend Michael Shiosaki and his father Fred ceremoniously presented us with a saw that had been in their family for four generations. 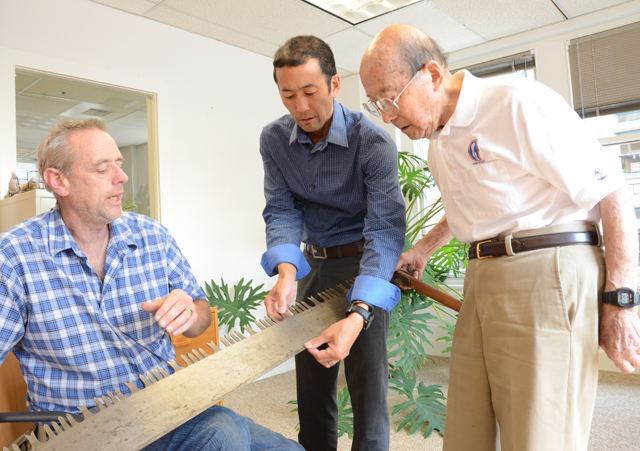 In 1915, in Hillyard (a neighborhood in the northern part of Spokane), Kisaburo Shiosaki started a laundry business. The laundry’s clients included railroad, forest and farm workers. Their dirty, heavy work clothes required steam and hot water to get them clean. The water was heated by wood, and that wood had to be harvested.

Kisaburo’s four sons, including Fred, were responsible for cutting the wood to feed the laundry’s furnace, which consumed 25 cords of wood each summer. This crosscut saw was a vital part of their lives and livelihood, as it enabled the sons to go to college. Eventually the laundry graduated from wood to gas and the sons graduated from sawyers to engineers. But the business stayed in the family for more than 90 years until it was eventually sold in 2005.

Fred married Lily, and together they raised a family and hiked and fished throughout Northeast Washington. They passed on their legacy to the next generation—their love of the outdoors to Michael and their special crosscut saw to WTA’s volunteers. In the hands of our volunteers, this heirloom with deep Washington roots will be used to clear trails for years to come.

As hikers, we might come to trails from various paths, but it is our love of hiking and desire to protect these special places that bring us all together.

Ruth Blackburn grew up in a logging family, worked in a sawmill for Sutherlin for several years, and later collected saws. "The old misery whip saws are familiar to my family,” she wrote in her letter to wrote our Southwest Regional Manager, Ryan Ojerio, asking if WTA might put the saws to work. Ryan visted Ruth, and gratefully accepted three crosscut gifts. He also accepted two crosscut saws (and valuable sharpening skills) from volunteer Randy Givens.

Northwest Regional Manager Arlen Bogaards accepted the gift of a 60” falling saw, acquired by member George Dooley from Willie Korvin. The saw, which still had plenty of life in it, had belonged to Willie’s father.

All of the saws have been meticulously sharpened—an exacting art that needs to be done by hand—and put into service for trails.