Honoring 14 years of generosity from the trail running community.

In December 2003, severe windstorms wreaked havoc on a large area of the Cascades east of Seattle, causing extensive damage to many popular trails. At the time, The Seattle Times referred to the aftermath as “the worst wind damage to East King County trails in at least a decade.”

With a trail running event in the area scheduled for only a few weeks away, a group of runners approached WTA with a request to form a work party. WTA agreed, and the crew quickly went to work clearing staggering amounts of fallen trees and branches away from the trails of Tiger Mountain, near Issaquah. 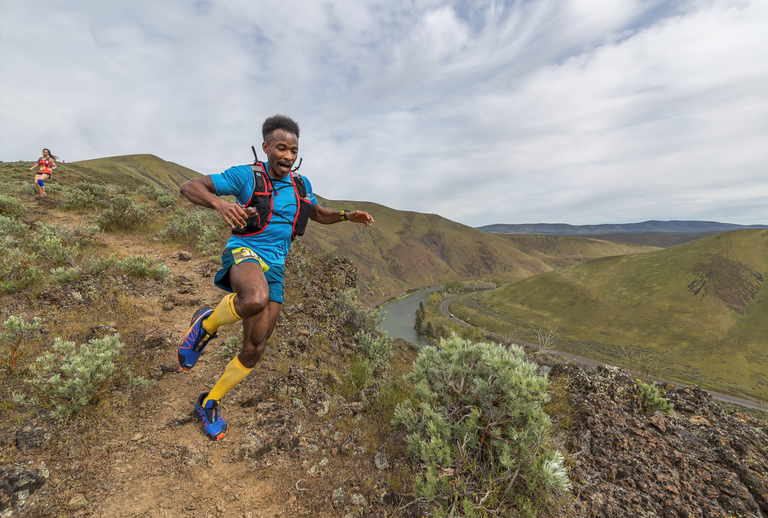 Dynamic photos like this have filled the Tribute to the Trails calendar for 14 years — all while helping Washington Trails Association care for trails that trail runners and all trail users enjoy. Photo by Glenn Tachiyama.

Prolific trail running photographer Glenn Tachiyama was one of those on the work parties. Glenn was so dedicated to the effort that he took a week off from his job to aid in the cleanup. This experience eventually led Glenn to dedicate the entire proceeds of his 14-year calendar project, Tribute to the Trails, to WTA.

Glenn says a friend first approached him with the idea for a calendar in 2005 (an idea that came about during — what else? — a trail run). Together they secured sponsorships to cover printing costs and pitched local running stores to stock the calendar on their shelves.

“I started taking photos after I discovered trail running because there were so many beautiful places and I wanted to document my adventures. But I wasn’t doing anything with the photos,” Tachiyama said. “Of course, with all that WTA did for the (trail running) community back in 2003, WTA was the logical choice as the beneficiary.”

From the very beginning, Tribute to the Trails featured Glenn’s stunning photography and catered specifically to trail runners, highlighting race dates and other notable trail running events from around the country.

In 2006, Glenn teamed up with Wendy Wheeler-Jacobs, who later served as president of WTA’s board of directors, and the two ran with the project for another 13 years — eventually raising more than $250,000 for WTA.

Glenn and Wendy largely attribute the success of the calendar to the generosity of the trail running community, including stores that distributed the calendar, race directors who sponsored the project and the many people who purchased Tribute to the Trails year after year.

2019 was the final year of Tribute to the Trails, as Glenn and Wendy have decided to take a much-deserved step back from the project. While we’ll be sad to see the calendar go, we are enormously grateful to have been on the receiving end of the trail running community’s generosity for all these years.

From all of us at WTA, thank you, Glenn and Wendy, for all of your hard work on this incredible project!