Skip to content
And the Award Goes to ... Pete Dewell! Since he first became involved with WTA in the '90s, Pete has spent 1,600+ days out on trail, served on WTA's board of directors, and provided pro-bono legal counsel to the organization. https://www.wta.org/news/signpost/and-the-award-goes-to-pete-dewell https://www.wta.org/news/signpost/and-the-award-goes-to-pete-dewell/@@download/image/pete-dewell.jpg

And the Award Goes to ... Pete Dewell!

Since he first became involved with WTA in the '90s, Pete has spent 1,600+ days out on trail, served on WTA's board of directors, and provided pro-bono legal counsel to the organization.

Not many people are aware of WTA's coveted White Hat Award. Since WTA's inception in 1966, only eight individuals have been honored with the White Hat. Past recipients include Louise Marshall, WTA's founder; Bill Sunderland, the mastermind behind the WTA website; and Elizabeth Lunney, WTA's longest-serving Executive Director. What do these folks have in common? Their extraordinary commitment, service and leadership over the course of may years have had a transformative and everlasting impact on WTA. 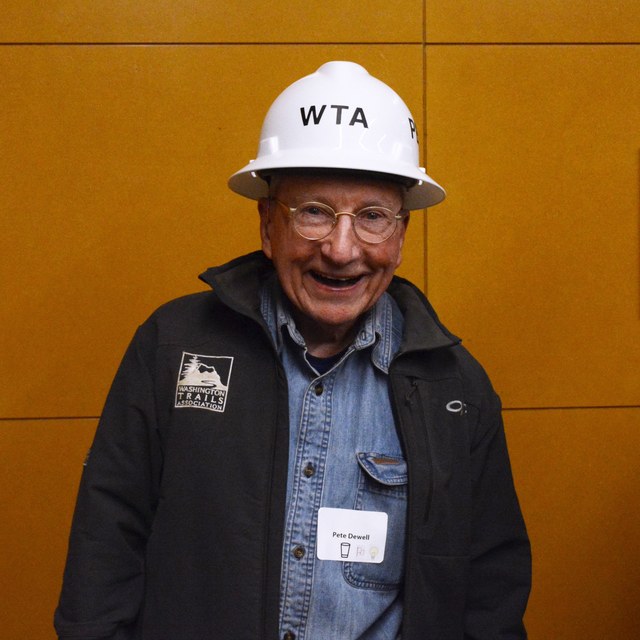 We wouldn't be surprised if you've worked alongside Pete at a work party or if you've spotted him out and about while on a hike. Since first becoming involved with WTA in the late 1990s, Pete has spent more than 1,600 days (that's almost four and a half years!) out on trail as a volunteer. But it doesn't stop there; in addition to his time spent on trail, Pete also served several years on WTA's board of directors, has graciously provided pro-bono legal counsel to the organization and has even written a how-to trail guide for trail volunteers.

"I began doing trail work with WTA around 1998," Pete says. "As I began to come out more often, crew leaders taught me more skills—construction of puncheons, walls, steps and turnpikes, for instance—which increased my trail building fun and satisfaction. For me, all trail building and maintenance work is fun, even brushing and duff removal. I find that personally doing the work, as well as teaching how to do it, give me equal satisfaction."

We can't thank Pete enough for his steadfast commitment to WTA and for everything else he has done for the organization and the WTA community at large. Make sure to congratulate Pete the next time you see him out on trail!

Scooternerd on And the Award Goes to ... Pete Dewell!

Gratz, Pete. You are an inspiration to us all!